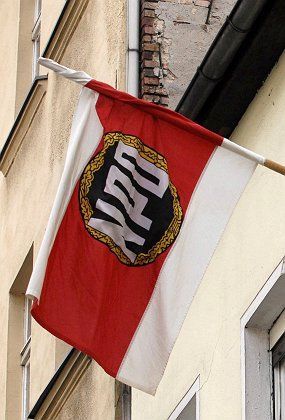 Conservatives in Germany argue that banning the NPD would just make the neo-Nazi party more difficult to control.

Germany's second attempt to ban the far-right National Democratic Party looks doomed before it has even begun because a number of conservative-ruled states are refusing to cooperate in mounting a legal bid against the party.

The president of Germany's Central Council of Jews, Charlotte Knobloch, criticized the states which failed to present information on the activities of the NPD in their respective territories by a March 31 deadline.

"I don't agree with the way this is being handled," Knobloch told the Märkische Oderzeitung newspaper in an interview published on Tuesday. Her deputy, Dieter Graumann, told the Associated Press that it would be a sign of "helplessness and resignation" if no attempt was made to ban a party that spread "poisonous propaganda."

The domestic intelligence agency, the Office for the Protection of the Constitution, calls the NPD "racist, anti-Semitic, revisionist" in its 2006 report and says it "denigrates the democratic and legal order of the constitution." As a legitimate political party, the NPD gets state funding.

Germany tried to ban the NPD before, in 2003, but the country's highest court threw out the case because it was based partly on testimony from informants in the NPD recruited by the domestic intelligence service. That failure was a major embarassment to the government and emboldened the NPD which did well in several subsequent regional elections, crossing 5 percent hurdles to win seats in the eastern state parliaments of Saxony and Mecklenburg-Western Pomerania.

As a result, Chancellor Angela Merkel's conservatives are skeptical about a plan by the center-left Social Democrats to mount a new bid to get the party outlawed. The conservatives say a new legal bid may fail again and would make it harder to monitor the activities of the party because intelligence contacts with informants would have to be severed during the case.

"We would lose important insight into the inner workings of the party," Wolfgang Bosbach, the deputy head of the conservatives' parliamentary group, told the Mitteldeutsche Zeitung newspaper.

Another argument often cited against a ban is that it would drive right-wing extremists underground and thereby make them more dangerous. Eight of Germany's 16 federal states, all of them ruled by conservative governments, refused to provide information on the NPD's activities ahead of a conference on April 17 and 18 which is due to assess the prospects for a ban.

Social Democrat parliamentarian Sebastian Edathy, head of the domestic affairs committee of the Bundestag lower house of parliament, told the German news agency DPA: "I deeply disagree with those state interior ministers who are refusing to even assess whether a legal case would have any prospects or not." Anyone who was serious about fighting the NPD could not avoid discussing whether to ban the party, he added.

A guide by the NPD leadership for party candidates and officials states that the party's aim is to "restore the capability of the German Reich" and calls the German constitution a "diktat of the Western victorious powers." An "African, Asian or Oriental" can never become German, regardless of whether they obtain a German passport, the party states. Members of other races will "always remain foreign bodies physically, mentally and spiritually, regardless of how long they live in Germany."

NPD flags and symbols are unmistakably similar to Nazi paraphernalia, and party members are on record praising Hitler and his henchmen. And in a bid to broaden its support, the party has been recruiting members of the violent neo-Nazi scene into its leadership and has joined forces with the far-right German People's Union (DVU) party.