There were several people involved: two men, one woman and a handful of helpers. But they shared a single mind-set, one that focused on killing the declared enemy, that glorified killing as an ideology in itself, and that made films with cartoon characters pointing at gruesome murder scenes. Beate Zschäpe, Uwe Mundlos and Uwe Böhnhardt, the members of the Zwickau terrorist cell, lived to kill. They were the ones who decided who deserved to live, and who deserved to die.

They did not try to draw any attention to themselves. Instead, their mindset was apparently incentive enough. In the words of Hajo Funke, a prominent analyst of the far-right in Germany, it was about the "propaganda of the deed." But it really looked more like political insanity paired with individual psychopathology.

Whatever the case may be, a lot is known about far-right terrorists in Germany. In 2010, a study on the biographies of extremists who commit acts of violence was published after being commissioned by Germany's Federal Criminal Police Office (BKA). It concluded that extremist ideologies -- regardless of whether they are left- or right-wing -- give their adherents a sense of direction that supports them in their everyday lives. The reason that such ideologies are embraced in the first place, it said, can in most cases be attributed to some deficit or insecurity.

Indeed, family environment would seem to play a decisive role, as can be seen from the fact that hardly any of the criminals who were examined came from two-parent homes. This approach to explaining things is just as simplistic as it is plausible: Individuals who don't get the closeness and recognition they need from their mothers and fathers will go looking for it elsewhere. Most extremists have broken off ties with their parents and allowed their cliques to replace their families, a fact which helps to explain why there is such as strong sense of cohesion within these groupings. And that's also how it apparently was in the case of Zschäpe, Böhnhardt and Mundlos.

The researchers also discovered that radicalization was most often accompanied by a measure of self-dramatization: the more brutal the act, the more celebrated -- and the more one celebrates oneself.

When it comes to the Zwickau terrorist cell, their 15-minute film documents in a distressing way how much the perpetrators of these crimes craved recognition. They set the scenes of their crimes very meticulously, they mixed in the cheerful, harmless cartoon figure of the Pink Panther, and they anticipated how the film would resonate in the media -- all to mock their victims.

The murders were committed by just three people. But how do things look like if you take a broader view of the entire far-right scene in Germany?

How Many Right-Wing Extremists Are There in Germany?

In late 2010, the Office for the Protection of the Constitution (BfV), Germany's domestic intelligence agency, estimated that there are roughly 25,000 right-wing extremists in Germany, but that only a certain proportion of them are organized into groups. Given Germany's overall population of just under 82 million, that entails an infinitesimal proportion of only 0.03 percent. Nevertheless, their importance in Germany is disproportionately large.

How Many of the Right-Wing Extremists Are Prone to Violence?

Of the roughly 25,000 right-wing extremists in Germany, more than one-third (or 9,500) are considered prone to violence. According to the domestic intelligence agency, the proportion of these individuals who are particularly radical neo-Nazis grew by 600 between 2009 and 2010 to reach 5,600. By definition, neo-Nazis want the "Third Reich" back and strive to have an ethnically homogenous, dictatorial state replace the democratic constitutional government based on the principle of liberty.

The BfV is also warning of increased radicalization within the far-right extremist scene. "On the whole," its report said, "it is possible to see a rise in the potential for violence as well as in the willingness to employ violence to attain one's political goals."

According to Bernd Wagner, a Berlin-based criminologist and expert on right-wing extremism, there are primarily small groups in Germany "that are working on becoming capable of performing acts of terrorism" as well as on forming networks with similarly minded groups. Wagner says these cells are usually made up of two to four people, operate underground and independently, and frequently try to get their hands on weapons and explosives so they can wage a partisan battle against foreigners and thereby inflict damage upon the democratic order.

The majority of violent right-wing extremists are recruited from among the ranks of skinheads and fans of the music genres known as "NS hatecore" and "NS black metal," with "NS" denoting "National Socialist." Members of the so-called "autonomous nationalists" -- sometimes also known as the "anarchist socialists" -- are particularly prone to violence, the report added. They represent the fastest-growing branch of the neo-Nazi scene.

The BfV report also notes that these often young neo-Nazis wear clothes that bear a resemblance to those typically seen on left-wing anarchists, strategically employ violence in order to attract widespread media attention, have become adept at using set arguments critical of the current social system, and use youth-oriented events to recruit new members, including "experience-geared activities" that are fun and give off the impression of being unrelated to anything political.

How Many Crimes Can Be Attributed to Right-Wing Extremism?

In 2010, the BfV found that there were 15,905 politically motivated crimes associated with the far right. The figure represents a 15.2 percent drop compared with the 2009 figure of 18,750 crimes. The number of violent crimes in the same period fell from 891 to 762, a 14.5 percent reduction. A large majority of these, or 638, involved bodily injuries. Investigators also put the number of violent acts of an explicitly xenophobic nature at 285, and most of these cases also involved physical harm.

The report also concludes that far-right extremist violence continues to be concentrated in the five eastern states that were part of the former East Germany. The most acts of violence were committed there when measured as a ratio of crimes to inhabitants. The state of Saxony-Anhalt topped the list, followed by Brandenburg, Saxony, Thuringia and Mecklenburg-Western Pomerania.

Among other crimes not involving acts of violence, the most frequent were propaganda-related offenses (11,384), incitement of the people (2,279) and property damage (1,335).

The BfV report lists no crimes involving death for 2010 and only six crimes of attempted murder related to far-right extremists. However, there are some doubts as to whether these official figures are correct.

According to research conducted by the Berlin daily Tagesspeigel as well as Die Zeit, an influential weekly paper, right-wing violence claimed 137 lives in Germany between 1990 and 2009. The BfV, on the other hand, calculates that figure to be only 47. The significant discrepancy can be attributed to faults in the system of compiling information and failures on the part of investigators to identify crimes motivated by right-wing extremism -- and to report them as such.

The Berlin-based Amadeu Antonio Foundation, which aims to combat right-wing extremism and racism, even puts the figure of deaths related to right-wing violence since 1990 at 182, including the nine believed to have been committed by Mundlos, Böhnhardt and Zschäpe. This figure also takes into account all of the cases that exhibit "credible indications of a right-wing extremist or racist background."

How Many People Sympathize with the Right-Wing Extremist Scene?

This question cannot be posed without taking another aspect into consideration first, namely, that of who can really be categorized as being a "sympathizer."

According to Eckhard Jesse, an extremism expert at the Chemnitz University of Technology in the eastern state of Saxony, "after recent days, there might not be anyone in Germany" who approves of the murders and praises the acts of the Zwickau terrorist cell. He qualifies his statement, however, as not meaning that the message of right-wing groups falls on deaf ears. Right-wing extremists can find support in parts of the population when it comes to vague sympathies, Jesse says, citing the example of "resentment against foreigners."

A study commissioned by the Friedrich Ebert Stiftung (FES), a think tank with ties to Germany's center-left Social Democratic Party (SPD), found that it can be assumed that a large proportion of Germans harbor concrete right-wing extremists thoughts that are not influenced by current events.

However, Jesse points out that, despite high levels of support for anti-democratic feelings, chauvinism, xenophobia and Social Darwinism -- that is, the theory that individuals, groups and races are also subject to Charles Darwin's laws of natural selection -- "when compared with other countries, Germany is not one of the upper outliers in terms of right-wing extremism." This can particularly be seen during elections, he says, in which parties such as the far-right National Democratic Party (NPD) hardly play any role at all. "Things don't really look as good when it comes to far-right extremist subcultures," he says.

Who Are the Sympathizers?

So, what does the average proponent of the right-wing scene in Germany look like?

The FES study found that more men than women agree with right-wing extremist sentiments, and that the supporters were more often people living in rural settings with little formal education rather than high levels of educational achievement. Likewise, they are more likely to be unemployed than employed, and right-wing views enjoy a particularly large amount of sympathy among individuals older than 60 and who enjoyed relatively little success at their jobs.

Thomas Krüger, the president of Germany's Federal Agency for Civic Education (bpb), finds the situation in rural parts of Germany to be particularly problematic. He says there is no critical stance toward right-wing extremists attitudes in some regions of the country. Krüger primarily attributes this to demographic developments that have seen particularly well-educated youths moving away from such areas. "The old and the educationally disadvantaged are left behind," he says, "which gives rise to an ominous milieu."

How Widespread are Far-Right Views?

Part of the FES study involved a survey on responses to certain positions frequently taken by members of Germany's far right. A cross-section of the German population was asked whether they agree with the following statements. (For these results, the answers "I fully agree" and "I largely agree" were combined.)

- Foreigners come to Germany to take advantage of the welfare state: 34.3 percent

- Germany is in serious danger of being overrun by foreigners: 35.6 percent

- If it weren't for the Holocaust, Hitler would be remembered as a great statesman: 10.7 percent

- We need a leader who can rule Germany with a firm hand for the benefit of all: 13.2 percent

- Germans actually are naturally superior to other people: 13.3 percent

- Some lives have value while others don't: 10.8 percent

However, Eckhard Jesse, the analyst at the Chemnitz University of Technology, notes that opinion-based studies are always prone to error: "Clever respondents know right away which answers are socially acceptable," he says. In other words, they can opt to hide their true opinions. By the same token, he adds, answers from other respondents might register as far-right simply owing to the unsophisticated manner in which they are answered -- even if the respondents aren't actually extremists.

How Reliable are the Results?

Since definitions and counting methods always influence results, statistics on far-right extremism should always be read with a certain degree of skepticism. What's more, there is also a large area of uncertainty. Only known phenomena can be documented. Far-right groups that remain off the radars of experts -- as the Zwickau cell did -- won't appear in statistical surveys.

The latest report from the BvF, released in 2010, claims that "no right-wing terrorist organizations can be observed in Germany." By that time, the Zwickau cell had been operating underground for over a decade -- which leaves room for powerful criticism of the agency. Its report merely says, in terse terms: "The affinity for weapons and explosives among far-right extremists continues to represent a latent potential for danger. In view of this fact, crimes by individual actors cannot be ruled out." 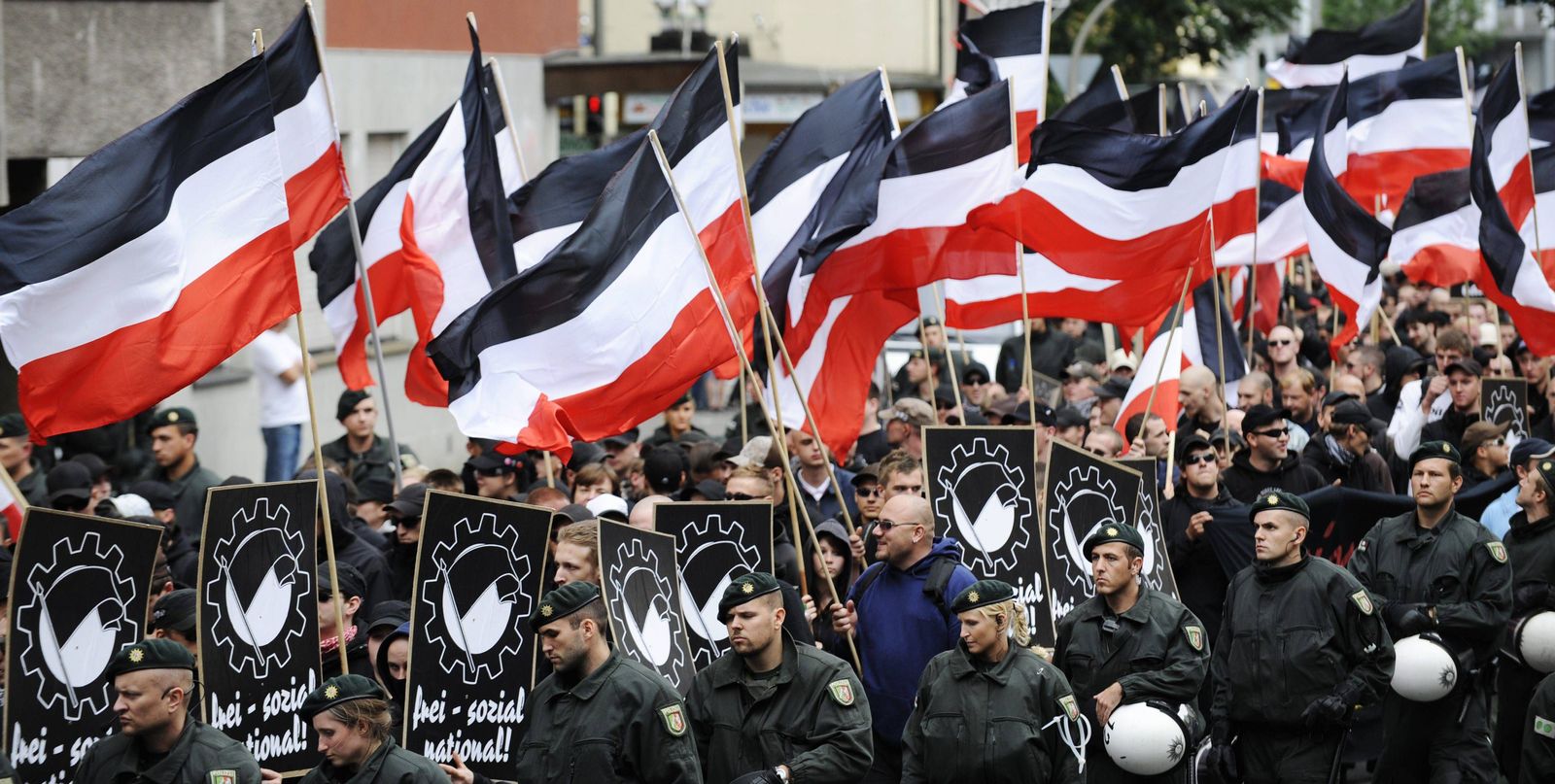 A neo-Nazi demonstration in Dortmund in 2008: Despite its small numbers, Germany's far right has a disproportunately large influence in Germany.