As pressure mounts on her handpicked president, Angela Merkel is still standing behind Christian Wulff. Speaking through her spokesman Steffen Seibert, the German chancellor made her first comments on Friday since Wulff gave a primetime television interview two days earlier explaining a combative voicemail message he left with the editor of a tabloid paper that was about to expose a personal loan the politician had attempted to hide from the public when he was a state governor.

The simmering loan affair threatened to transform into a full-scale scandal this week after the news of Wulff's spat with Bild emerged. In the voicemail, he allegedly threatened "war" with the tabloid's editor in chief, Kai Diekmann, if it went ahead with the story. But speaking to public TV stations ARD and ZDF, Wulff said he only wanted to delay publication of the story by a day, a characterization Bild contested on Thursday, saying the president had sought to stop publication altogether. The paper further upped the ante by saying it would publish the transcript of the message if Wulff agreed -- a step the president declined to take.

Chancellor Has 'High Esteem' for President

Publically, Merkel is still standing behind Wulff. On Friday, her spokesman Steffen Seibert reiterated that the chancellor has "high esteem" for Wulff as both a person and a president. Merkel also welcomed the public explanation he offered in his interview, describing it as an important step in rebuilding people's trust. Seibert would not comment on Wulff's decision not to publish the transcript of his call, offering only that it should be "respected."

Still it is clear that Merkel, a down to earth woman known for the modest vacations she takes at her small dacha north of Berlin or in the Alps, doesn't think much of Wulff's behavior -- accepting, for example, free holidays from rich friends, or the cronyism with the business elite in Hanover, the capital of Lower Saxony where Wulff was governor. Merkel has also made Wulff aware of her opinion, too -- both in personal talks and in lightly veiled public comments through her spokespeople. She has also pushed him to provide further explanations -- pressure that ultimately led him to offer to give a public television interview this week. Indeed, there's little more the chancellor could do to place pressure on the president without completely undermining him.

At the root of the affair is the fact that Wulff and his wife Bettina took a €500,000 ($640,000) personal loan to purchase a new house from millioniare businessman Egon Geerkens in 2008. Wulff was governor at the time. When queried by the state parliament about whether he had any kind of business relationship with Geerkens, Wulff failed to disclose the loan. He has been criticized because the loan offered an interest rate significantly below normal market prices. Wulff later took a separate loan from state-owned BW-Bank to repay the original, private loan. That loan also fell under criticism because it was at a more favorable interest rate than that which would be available to normal customers.

Wulff has publicly apologized for not disclosing the loan, saying he had erred. But in his interview this week, Wulff also stated defiantly, "I wouldn't want to be a president in a country where a person can no longer borrow money from friends." Wulff also claimed that he had only asked Bild editor in chief Kai Diekmann if the paper could delay publication of the story by one day until the president, who was traveling in Qatar at the time, was back in Germany. But Bild maintained Thursday that Wulff had sought to halt publication of the entire story. Publishing house Springer, which owns Bild, also claims Wulff contacted the company's CEO Matthias Döpner and its owner, Frieda Springer.

Bild isn't the only source contesting some of the claims made in Wulff's television interview. On Friday, the daily Die Welt reported that BW-Bank officials are claiming that Wulff mischaracterized the timeframe of a new loan contract Wulff negotiated with the bank in late 2011. The new contract essentially converted the favorable 2010 bank loan into a mortgage at the going market rate. Wulff stated he closed the deal on Nov. 25, 2011. "In this area, a handshake quality is also valid, if a person has reached an agreement with the bank," he said. But the bank is stating the deal wasn't final. "A loan contract with consumers has to be in written form," the bank told Die Welt, which is also owned by Springer. The bank claims Wulff did not sign the contract until Dec. 21, close to a week after the news first broke of his personal loan.

After Wulff denied Bild the right to publish the contents of the phone call, a public rift emerged between the president and the newspaper. On Thursday, Bild's Diekmann wrote: "In order to prevent misunderstandings regarding the content and motive of your call, we view it as necessary to publish a transcript of your message."

Wulff then issued his own public letter denying the request. "The words that were spoken in an exceptionally emotional situation were intended for you and no one else," the president wrote. "I apologized to you shortly afterward. You accepted this apology. That put an end to the dispute between us and I believe that it should remain so."

In his TV interview, Wulff had pledged improved transparency, a claim the paper riffed off of in its retort. "Now the inconsistencies in the context of the president's television interview in terms of the aims of his call cannot be resolved with the promised transparency," the paper said in a statement.

In an editorial published in the paper on Friday, Diekmann sought to downplay the idea that a major public standoff was taking place. "Those who are trying to inflate the case and problems of the president into a 'power struggle' between the man in the country's highest office and the country's largest newspaper are truly entirely missing the point."

Meanwhile, opposition politicians are growing increasingly critical of the president. "I have no understanding for the fact that Christian Wulff (on Wednesday) announced transparency and he then failed to take advantage of his first opportunity to use it," said Thomas Oppermann, a senior politician in the parliamentary group of the center-left Social Democratic Party. He also called on Merkel to put her foot down. "If Ms. Merkel is interested in ending this sanctimonious act, then she should convince Wulff to agree to the publication (of the transcript)."

Wulff's political opponents are also seeking to make the affair surrounding him a problem for Merkel, who selected him to succeed his predecessor, Horst Köhler, who stepped down abruptly in 2010. By fielding Wulff as a candidate for president, Merkel also effectively sidelined a potentially powerful challenger. But Wulff entered office a weakened president because it took an embarrassing three votes of the Federal Assembly before he was ultimately elected.

Despite the president's woes, most Germans say they would like to see Wulff remain in office. In a poll taken this week, 61 percent of Germans said they were unconvinced by Wulff's interview. Nevertheless, 60 percent of those surveyed in the ARD-Deutschlandtrend poll for the public television station said they believed Wulff "now deserves a second change." In a separate ARD survey taken by pollster Infratest, 56 percent said Wulff should remain in office. 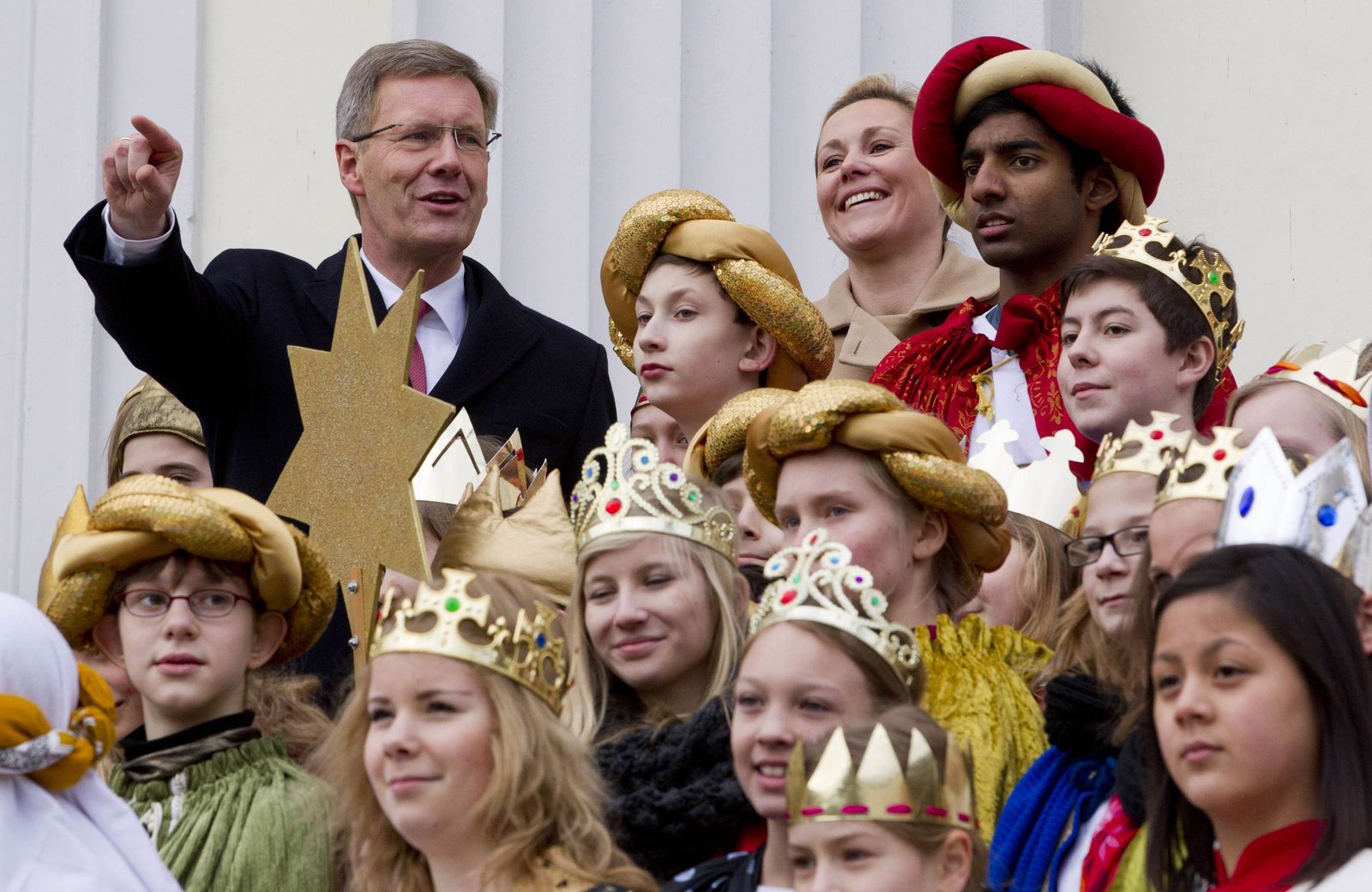