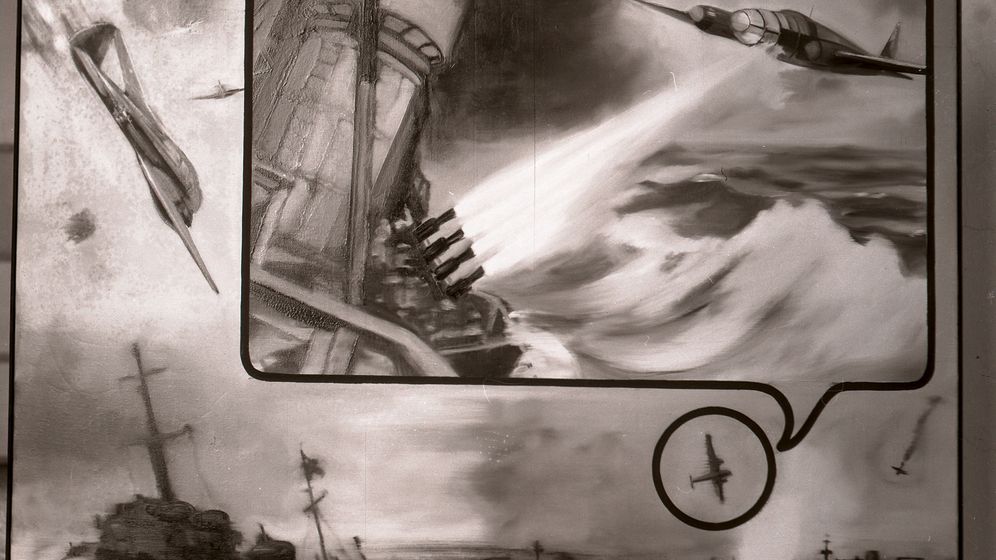 There was the painting of a warship that had been hit by a torpedo. It was shown in 1964, in the first gallery show of a painter who was still unknown at the time. It looked serious and dramatic, with the calm water in the distance, the inconspicuous silhouette of the ship and, underneath it all, a gigantic explosion. But then it disappeared.

Another painting that vanished forever was a work entitled "Tame Kangaroo," based on a curious magazine photo that the artist called a "wonderful" model in 1964. The painting was priced at 1,100 deutsche marks at the time. That same year, he also exhibited his portrait of Hitler, painted in 1962. It also disappeared.

These are great, vexing works. If they still existed, they would be hanging in private collections or major museums. Today, their creator is the most famous German contemporary artist, and the one whose works fetch the highest prices. Indeed, Gerhard Richter is the most important painter of our time.

The lost paintings are from Richter's very important creative phase in which he opened up new horizons for painting. In the early 1960s, he began working from photographs. The motifs were usually blurred on his canvases, and much appeared in only shadowy outlines. Although they had something about them derived from traditional painting, his artworks were also excitingly contemporary.

A Refusal to Compromise

Still, a surprisingly large number of his early works no longer exist. Richter destroyed them himself, some with a box cutter and some by burning them with other trash from his studio. He destroyed about 60 of these photo-based paintings -- finished works rather than sketches or studies -- in the 1960s. Today, they would probably be worth at least half a billion euros ($655 million). Richter was garnering his first acclaim at the time, but he was often at odds with his own art. Still, since his urge to destroy some of his paintings also made him feel uneasy, he photographed them before doing so.

These photos, most of which were never published, are now either in the Gerhard Richter Archive in the eastern German city of Dresden, where the painter was born, or in a box in his studio in the western city of Cologne. They are testaments to his refusal to compromise.

Daring to Address the Taboo

Richter is an affable man. He accompanies much of what he says with a small, quiet laugh. "Sometimes, when I see one of the photos, I think to myself: That's too bad; you could have let this one or that one survive." But he also says: "Cutting up the paintings was always an act of liberation."

He has a surprisingly clear memory of the works, almost as if they still existed. The warship, he says, seemed "too eye-catching" to him. And the kangaroo was "very funny, but I suppose it was only funny, which I don't like at all."

And his Hitler, who looked as banal as a comic-book figure, yet so tellingly evil? Long before the student uprisings of the late 1960s, Richter had the courage to put an end to the widespread tendency to repress discussion of Germany's recent wartime past. Although his aunt had been a victim of the Nazis' euthanasia campaign, his uncle cheerfully donned the uniform of the Wehrmacht, German's wartime army, when Richter painted his portrait. In doing so, he was showing how all German families had been warped.

At the time, no other artist would have dared to confront these kinds of issues -- or to paint an image of Hitler. But, today, Richter says he found the portrait and the motif too spectacular. Perhaps he should have given the work -- and his audience -- more time. It would have been a work of fundamental importance in the history of art.

Wrestling with the Received Tradition

Richter turns 80 on Feb. 9. On Friday, Feb. 3, a new show will be opening at the Gerhard Richter Archive in Dresden, to be followed by exhibitions at various museums, including the New National Gallery in Berlin and the Centre Pompidou in Paris.

However, the evidence of the works he destroyed constitutes something of a separate, secret museum. These include an image of a test field with reeds, based on a photo from a farming magazine, and a painting of a woman sunning herself outdoors on a chaise lounge, which seems to portray the epitome of postwar triviality. There is also another painting of a war scene, though this one assumes the form of a comic strip. And then there are portraits of entire families. Indeed, families -- their facades, their outward appearances -- have always been an important subject for the artist.

In the years in which these paintings were made, Richter was rebelling against abstraction. He had studied in Dresden, where the style known as Socialist Realism was taught. He fled to the West in 1961, before the Berlin Wall was built. At first, he tried his hand at informal paintings in the western city of Düsseldorf, but he destroyed almost all of these abstract experiments. Indeed, Richter was fed up with this "shitty painting" until, one day, he spontaneously tried painting from a photograph -- and discovered a new form of realism for himself.

At first, the result was something that might have been called German Pop Art, except that it was more profound. The works were often painted in gray tones, like the photos he used, which were either his own or from magazines. But they felt fresh, attractive, clever and subversive. In thematic terms, everything was possible in his paintings, just as all sorts of things can be photographed.

Richter says he was impatient. This impatience, and an insecurity that he never tried to suppress, were his driving forces. He broke his images down into pieces, destroyed their representationalism, sought new paths and found his way back to abstractionism. Before long, he was able to accept both approaches.

In the fall of 2011, one of his non-representational compositions fetched more than €15 million at a Sotheby's auction, setting yet record for a Richter.

Indeed, Richter is willing to part ways with his paintings every now and then, whenever he finds they've been bothering him for too long. This applies to both abstract and figurative works. One of his assistants once pulled a cut-up painting out of the garbage and, with Richter's permission, had it restored before selling it.

Today, Richter says he's surprised at how many works he continued to destroy after the 1960s. Perhaps he will return to one motif or another, he adds, noting that "otherwise it would be a shame." One painting, in particular, comes to mind. It was painted in 1990 and shows two young people standing in front of Madrid's Museo del Prado, Spain's national art museum. However, two years later, he painted over this work, turning "Prado, Madrid" into "Abstract Painting, 1992."

In some old photos, one can see Richter's former studio and canvases that he later sliced to pieces with a knife alongside some still-existing paintings. Even when the paintings are shown standing next to each other, there is rarely any evidence of what he exactly objected to in the works he destroyed or why he was so harsh in his assessments.

Richter says he occasionally also saves paintings from himself. In 2005, when he began working on a painting of New York's burning World Trade Center towers, he decided he would eventually destroy the painting. In fact, he even publicly stated this in an interview with SPIEGEL published alongside the first publicized photo of the painting. Then, he removed it from public view for a long time. But, today, it belongs to New York's Museum of Modern Art.

"Sometimes," says Richter, "time teaches you things." One recognizes, he adds, that although a work may not have achieved what was originally intended, something different was created instead, "something that might be more important." He now knows, he says, that the World Trade Center work is "a great painting."