Christopher Clark, 59, is one of the world's leading historians. The Australian has made a name for himself far beyond the specialist world through his bestselling books "Iron Kingdom: The Rise and Downfall of Prussia" and "The Sleepwalkers: How Europe Went to War in 1914." In their current legal dispute with the state of Brandenburg, Germany's Hohenzollerns, the country's former ruling family, are basing their case on an expert report prepared eight years ago by the Cambridge professor. The Hohenzollerns are demanding compensation in the millions of euros, which the state has rejected because, it claims, former Crown Prince Wilhelm, the head of the house until 1951, had "given considerable support" to the National Socialists. The Hohenzollerns have denied this claim.

For the first time, in an interview with DER SPIEGEL, Clark speaks about the work he did as an expert for the Hohenzollerns.

DER SPIEGEL: Professor Clark, are you allowed to speak to us about the Hohenzollerns?

Clark: I will speak to whomever I want. Why do you ask?

DER SPIEGEL: You're an expert for the Hohenzollerns. They initially wanted to keep their legal dispute with the state of Brandenburg secret and even sought a court order to muzzle the parties involved.

Clark: I wrote my opinion in 2011; I took no interest in what happened next - until the recent escalation of the dispute.

DER SPIEGEL: Was that not naive?

Clark: I'm a historian, not a lawyer.

DER SPIEGEL: How did you get commissioned by Hohenzollerns?

Clark: Family lawyers asked through one of my colleagues if I would be interested in writing an expert report. It was about former Crown Prince Wilhelm and his behavior before and during the seizure of power by the National Socialists and in the period afterward when Hitler consolidated power. This sort of thing is interesting for historians.

DER SPIEGEL: In this instance, it's not about writing history -- it's about a lot of money. The Soviets expropriated the Hohenzollerns in their occupation zone (Ed's: in East Germany). The family is entitled to compensation -- unless they provided the Nazis with "considerable support" as the law states.

Clark: This legal situation is, for understandable reasons given the country's recent history, a German peculiarity. However, it leads to a blending of historical judgment, political morality and justice. The Hohenzollerns are forced to argue historically if they don't want to renounce their estate.

DER SPIEGEL: And you're helping them do that.

Clark: I don't see it that way. I told the lawyers at the outset that I would conduct the work with an open mind as to the final outcome.

DER SPIEGEL: A lawyer for the Hohenzollerns recently explained that you had also been hired because, as an Australian, you were more likely to have an unbiased view of German history.

Clark: I object to being put to use in this way.

DER SPIEGEL: But is it even possible, as the author of an expert opinion, to avoid that?

Clark: As I recall, it was a matter of a private expert opinion rather than a public statement. Though I must say that I completely underestimated the magnitude of the dispute. I had no idea that it would give rise to such a major legal battle.

DER SPIEGEL: Georg Friedrich, Prince of Prussia, is using German press laws and even a criminal complaint against historians and journalists who have spoken about the Hohenzollerns. Colleagues of yours such as Stephan Malinowski, Karina Urbach and Winfried Süss are affected, but also major German newspapers like the Frankfurter Allgemeine Zeitung, the Berliner Zeitung and Die Zeit.

Clark: That's really outrageous. I find it appalling that legal remedies are being used against esteemed colleagues and serious journalists. An open historical debate must always be possible.

DER SPIEGEL: Perhaps there are times when we historians and journalists don't quite formulate all the points clearly enough.

Clark: I don't want to go into the detail, but my own view is that these legal actions should stop immediately. The polemics on the other side also bother me. Some of the Hohenzollerns' critics go further than rejecting the claims as unjustified. They describe the family as a tribe, a clan or a gang. It makes you wonder about the emotions that drive such language.

DER SPIEGEL: Do you have a hunch?

Clark: There seems to be a strong animus against the nobility within parts of the German public.

DER SPIEGEL: What approach did you take in your work on the report?

Clark: I didn't have much time and I asked the firm to send copies of all relevant files from the Hohenzollern family archive. These included documents that were very incriminating for the crown prince, so I didn't get the impression that anything was being kept from me. For example, there was a letter from 1934 to the British newspaper magnate Lord Rothermere, in which Wilhelm boasted about how he had helped Hitler on his path to power.

DER SPIEGEL: So he did provide the Nazis with considerable support, then?

Clark: That depends on what you mean by "considerable support." The crown prince suffered from overconfidence bordering on the delusional. If one were to list Hitler's most important supporters, he would not be among the first 300. He is barely mentioned, by the way, in the literature on the Nazi seizure of power.

DER SPIEGEL: Where did he stand politically?

Clark: The crown prince was an extreme reactionary with a brutal political outlook. His father, Emperor Wilhelm II, had him expelled from Berlin in 1913 because he believed he was capable of a coup. That gives us an impression of what this guy was like: He was too far to the right, even for the last kaiser.

DER SPIEGEL: The Prince of Prussia, the head of the Hohenzollerns, told the weekly newspaper Die Zeit that his ancestor had "once deviated from the path," but that he was "no supporter of Hitler."

Clark: That's his opinion, of course, but I don't share it. Taking this topic forward: The crown prince was never on "the path" -- he was always off course. He adopted a sympathetic view of National Socialism and wanted to support Hitler. During the waning days of the Weimar Republic, he was at the very right edge of a political spectrum that had already veered far to the right. In 1926, Hitler raised the prospect of the reintroduction of the monarchy to him and the crown prince was stupid enough to believe him. Like other conservatives, he thought he could use Hitler for his own advantage. But, like so many others, he was wrong. That was Germany's tragedy in that fateful hour. After all, it wasn't the leftists who failed when the key moment arrived -- it was the conservatives of the old elites.

DER SPIEGEL: What about the appeal by the crown prince in 1932 to back the National Socialist leader in the elections for the Reich president? Wilhelm claimed that this garnered the Nazis about 2 million votes.

Clark: One can only laugh at that. The man was a twit. He wasn't even taken seriously in monarchist circles.

DER SPIEGEL: You're understating the significance of the crown prince. In the final phase of the Weimar Republic, Hitler feared that he would lose to him in elections.

Clark: Not all of Hitler's fears were realistic.

DER SPIEGEL: Malinowski, a historian at the University of Edinburgh, is the expert working on behalf of the state of Brandenburg and, as such, is your opponent ...

Clark: ... I admire him. It's only in nuance that our assessments of the crown prince differ. It's basically a question of perspective.

DER SPIEGEL: Really? Your reports come to opposite conclusions. According to Malinowski, the crown prince was by no means a marginal figure.

Clark: The fact that Malinowski and I are being played off against each other in the legal context says nothing about the professional relationship between our assessments. I examined the seizure and consolidation of power by the National Socialists as an overall process and the role played by the crown prince in this process. From that perspective, Wilhelm seemed to me rather insignificant. But if, as Malinowski did, you focus on the crown prince and address the question from that vantage point, you will likely come to different conclusions. So this is less about the facts, which are undisputed, than about how you address the question of an individual's place within a historical process.

Clark: Symbolic capital was certainly important. However, many celebrities crowded around the Nazi leaders, including industrialists, bankers, church leaders and military leaders. Were the photographs featuring the crown prince more important to the regime than others? I doubt that.

DER SPIEGEL: The Hohenzollerns are the most important noble family in Germany. They have been the source of nine Prussian kings and three German kaisers. Regardless of what he really managed to achieve, the crown prince was an important symbolic figure.

Clark: I wonder how much symbolic capital the crown prince still actually had around 1933. It seems to me that this capital had long since passed to President Paul von Hindenburg. It wasn't the crown prince, but rather Hindenburg who embodied old Prussia. Take March 21, 1933 ...

DER SPIEGEL: ... the great propaganda event in Potsdam where Hitler wanted to position himself within the continuity of a glorious Prussian past.

Clark: The most important photo of that day was the one that shows Hitler bowing to Hindenburg. Not the photo in which Hitler can be seen with the crown prince, which also existed, of course.

DER SPIEGEL: But that day in Potsdam couldn't have taken place without the crown prince.

Clark: That is open to doubt. The event was a demonstration of power by conservative Germany, with Hindenburg at the center of focus and not the crown prince. Wilhelm knowing allowed himself to be part of the overall setting, but he was not one of the central players, much as he would have liked to be.

Clark: I know that not everyone agrees with me. Further research is needed on the topic, and that's what is happening.

DER SPIEGEL: So, are you distancing yourself from your expert report?

Clark: I stand by what I wrote at the time. But in view of the course that the case has taken, it seems to be more important today to ask about the crown prince's willingness to collaborate than about his actual influence on events. 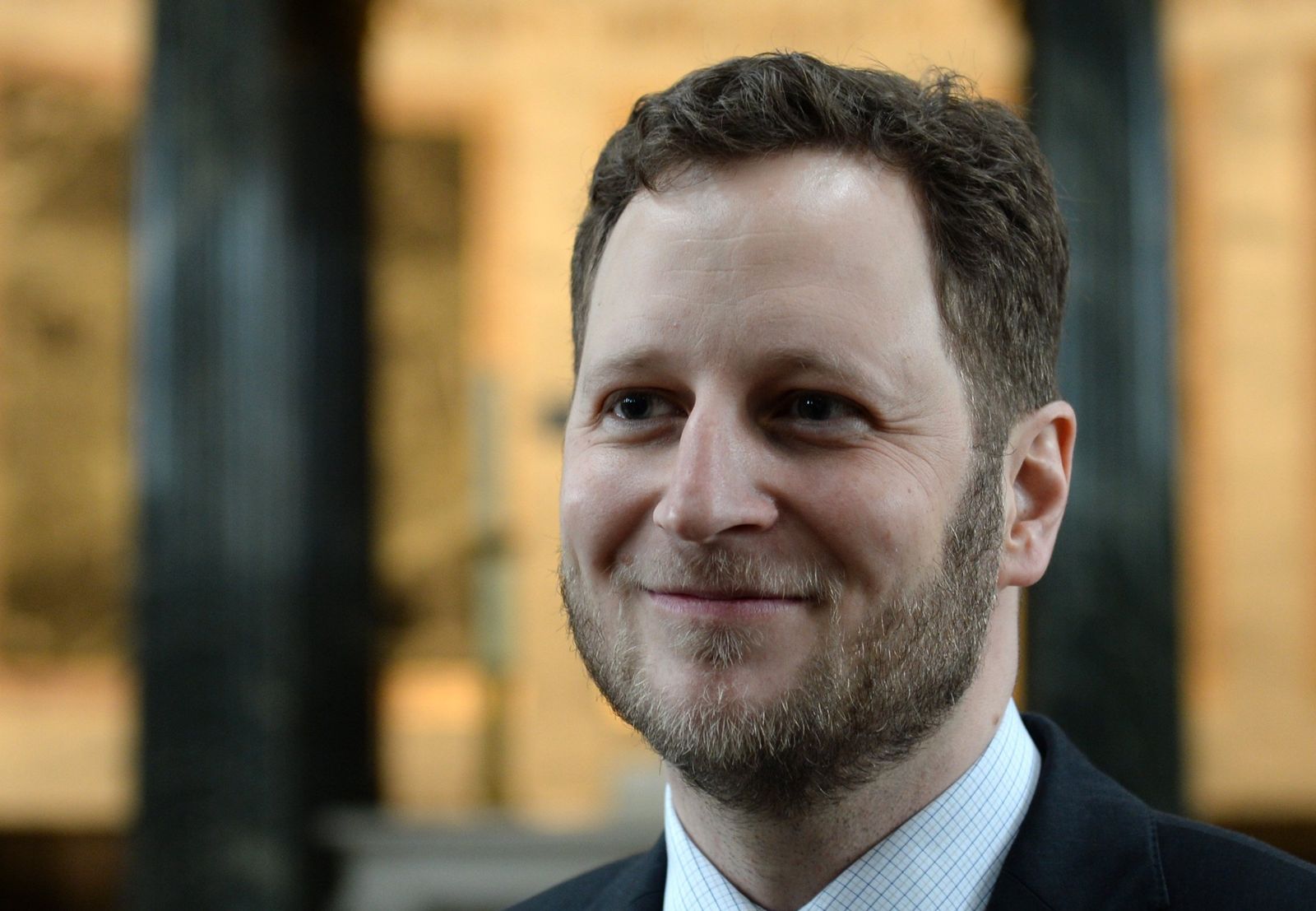 Georg Friedrich Prince of Prussia is the head of the Hohenzollern family.