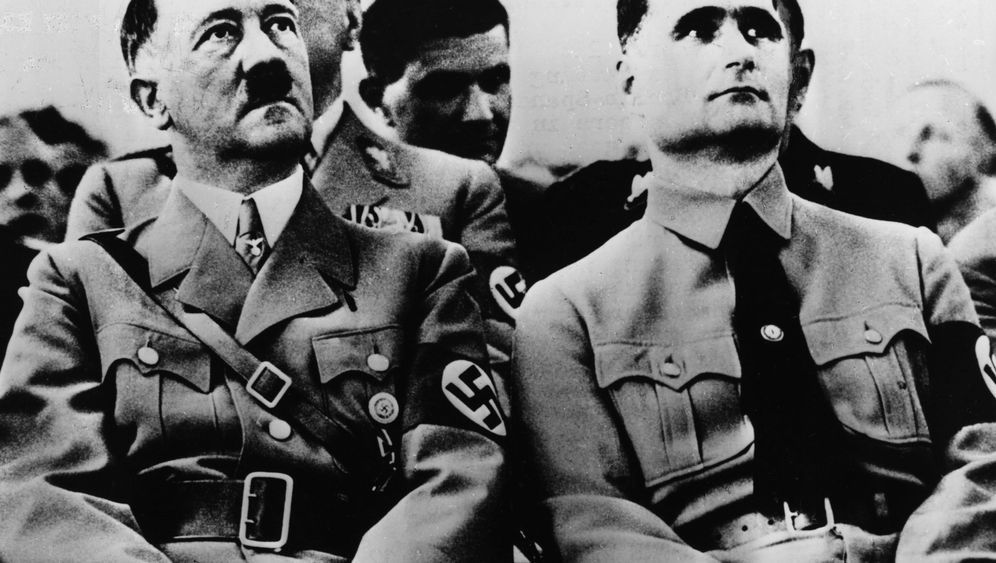 He had chosen the date, May 10, 1941, with the help of an astrologist, who told him that the stars were in his favor on that day. At about 6 p.m., Rudolf Hess took off from the Haunstetten airfield near the Bavarian city of Augsburg.

The Nazi Party's second-in-command was a seasoned pilot and former winner of the "Rund um die Zugspitze" air race around Germany's highest Alpine peak. Hess piloted his Messerschmitt 110 airplane down the Rhine River, across the Dutch coast and out over the North Sea, before turning toward Scotland and, after a five-hour flight, parachuting onto the ground near Glasgow.

A day laborer found the German, who had sprained his ankle. Home guardsmen took him to their base, where he told them that he urgently needed to speak with the Duke of Hamilton in his home at nearby Dungavel Castle.

By the next morning Hess was sitting across from the British aristocrat, whom he had met during the 1936 Summer Olympics in Berlin. Hess told Hamilton that he was on a "mission of humanity" and that the war with Great Britain had to be brought to an end, even though Germany would undoubtedly emerge victorious.

Hess's flight to Britain almost exactly 70 years ago has remained one of the great mysteries of World War II to this day. What compelled the Führer's right-hand man to risk his life on a spring day when 500 German bombers were carrying out their heaviest attack yet on London? Why did he offer peace to Great Britain at a time when it was the Wehrmacht's last fighting enemy and Hitler was preparing to attack the Soviet Union?

Until now, historians had assumed that Hitler's deputy was acting on his own. "Hess acted without Hitler's knowledge, but in the deep (if confused) belief that he was carrying out his wishes," British author Ian Kershaw wrote in his 2008 book, "Hitler: A Biography". But now a previously unpublished document is casting Hess's notorious one-way trip in a new light: A 28-page, handwritten report that historian Matthias Uhl of the German Historical Institute Moscow discovered in the State Archive of the Russian Federation.

The document was written in February 1948 by a man who was closely associated with Hess: his adjutant Karlheinz Pintsch, a Soviet war prisoner from 1945 to 1955. Pintsch, a businessman who joined the Nazi Party early on, had accompanied Hess to the airfield. The next day he had Hitler's aides wake up the Führer at his mountain retreat in Obersalzberg to give him a letter. According to eyewitnesses, the letter began with the words: "My Führer, when you receive this letter I shall be in England."

Contrary to the prevailing view, Hitler, according to the Pintsch account, was not furious in the least when he received the news. "Hitler calmly listened to my report and dismissed me without comment," Pintsch writes. The Führer had known about Hess's flight for a while, the adjutant claims in his report, because Berlin had also been negotiating with London for some time. The flight, Pintsch writes, occurred "by prior arrangement with the English." Hess's mission, he adds, was to "use all means at his disposal to achieve, if not a German military alliance with England against Russia, at least the neutralization of England."

Does a portion of the history of World War II have to be rewritten? Was the maneuver in fact an act of official diplomacy?

In any case, the new document lends new weight to those who never believed that Hess was acting on his own. For example, Hitler's valet Heinz Linge said after the war: "I didn't dare ask him whether he knew about Hess's flight to England, but his behavior told me that not only did he know about it in advance, but that he probably even sent Hess to England." Both Ernst Wilhelm Bohle, the head of the Nazi Party's foreign organization, and Hermann Göring's adjutant Karl Heinrich Bodenschatz, who were staying at the Obersalzberg house at the time when Hitler received the news about Hess's flight, gave similar accounts of the incident.

One thing is clear: No one else in his entourage was as loyal to Hitler as Hess. Hess had marched, with his pistol drawn, at the head of the group staging the infamous coup in 1923 and had later helped edit the manuscript of Hitler's "Mein Kampf" at Landsberg Prison, where both men were held after the failed putsch attempt. It was Hess who organized the Nazi storm troopers, the SA, in the party's early years and helped establish the pseudo-religious cult of the Führer. It was also Hess who, through intermediaries, had maintained contact with pro-German circles in Britain.

"An Unprecedented Breach of Trust"

But his air mission was a failure from the start. When he heard about the unexpected visitor from Germany, then-British Prime Minister Winston Churchill, who at the time was giving a dinner party at his weekend house near Oxford, was not even willing to postpone a planned film screening, saying: "Well, Hess or no Hess, I'm going to see the Marx Brothers." Why make peace with an aggressor who was determined to subjugate Europe? Hess was taken into custody.

Three days after the flight Martin Bormann, the head of the Party Chancellery, read Hess's farewell letter to a group of assembled senior Nazi leaders. Then Hitler appealed to the loyalty of his fellow combatants and said that Hess had committed an "unprecedented breach of trust." Reich Propaganda Minister Joseph Goebbels berated Hess as a "fool" and as someone who was "mentally disturbed." In a communiqué, the government stated that Hess had become a "victim of delusions." But even contemporaries questioned the official version, which held that Hitler's deputy had suddenly gone mad.

Pintsch, who had witnessed Hess's meticulous preparations and had not noticed any signs of lunacy, was arrested. After being held at the Gestapo prison on Prinz Albrecht Strasse in Berlin, he was transferred to the Oranienburg concentration camp near Berlin and later to the eastern front.

At the end of the war, the adjutant became a prisoner-of-war in the Soviet Union, where he was questioned by Soviet intelligence about the events of the spring of 1941. According to historian Uhl's research, copies of his statements were sent to Soviet dictator Josef Stalin, Foreign Minister Vyacheslav Molotov and Lavrentiy Beriya, the head of the intelligence service.

It is unclear whether what these men read was the truth, or simply what they wanted Pintsch to say. It is noticeable that the adjutant used vocabulary more commonly found in Soviet propaganda. The Cold War had already begun, and Pintsch stated that the reason he wanted to go public with his information "at this particular time," was that "reactionary circles in England and America are striving to unleash a war." The adjutant's statement ends with the words: "The facts I am reporting confirm that England, by promoting Hitler's aggression against Soviet Russia, acted in accordance with its old principle of using foreign hands to remove the chestnuts from the fire."

The theory of a German-British conspiracy corresponds to the interpretation favored by Stalin, who until the German invasion of his country on June 22, 1941, had believed that Hitler would not allow a war on two fronts and would seek peace with Britain first. But Stalin was wrong.

For this reason, historians like Rainer Schmidt of the University of Würzburg view the new document with skepticism. The cardinal question remains unanswered: "If these contacts occurred with Englishmen who were prepared to make peace, why didn't they meet on neutral soil?"

Schmidt also points to an alternative version, which Pintsch related to a British journalist in 1963, when he was no longer imprisoned by the Soviets. According to that account, Hess told him following a preparatory flight: "The Führer doesn't know that I will make this attempt this evening."

In the Nuremberg Trials against Germany's main war criminals, the Soviet judge wanted Hess to be executed by hanging, while the French judge voted for a 20-year prison term. The judges eventually agreed to a life sentence, partly for a charge that Hess, who saw himself as a mediator, probably found particularly difficult to accept: conspiracy against world peace.

The man Kershaw called the "most subaltern" of Hitler's cohorts was given a harsher sentence than most of the planners and executors of the Nazi Holocaust and war of extermination. Hess spent 40 years behind bars at the Allied Prison in Spandau on the outskirts of Berlin. He was alone most of the time. No historian was permitted to question him about his motives, nor was his attorney allowed to discuss his case with Hess.

When he received newspapers, all passages about the Nazi era had been torn out. He is said to have read 7,000 books and, near the end of his life, become an avid television viewer of tennis player Steffi Graf's matches. In 1987, Hess strangled himself with a piece of electric cable at the age of 93.