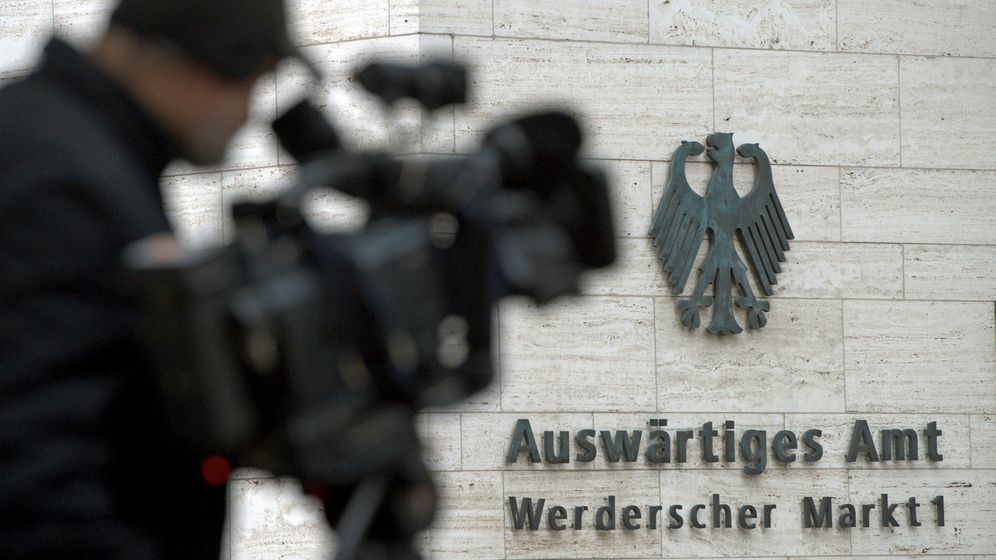 As far as book launches go, this will be an unusual one. Three German foreign ministers past and present will be marking the publication on Thursday of a history about the ministry's role during the Nazi era.

The 880-page work compiled by a panel of historians was commissioned in 2005 by Joschka Fischer shortly before the end of his tenure as Germany's top diplomat. It will be formally handed over to the present incumbent, Guido Westerwelle, on Thursday afternoon.

That evening, Fischer and Frank-Walter Steinmeier, who was foreign minister from the end of 2005 until last year, will be attending an event hosted by the publishing company Blessing Verlag.

All three ministers will have to talk about the Holocaust, about war crimes, about diplomatic failure, about perfidious behavior and about rare incidents of heroism, all in the context of the German Foreign Ministry during the Third Reich.

The book will be presented by a commission that includes the historians Eckart Conze and Norbert Frei of Germany, Peter Hayes of the United States and Moshe Zimmermann of Israel. Their book deals with the history of this most distinguished of German ministries during this dark chapter, and about how it dealt with its past after the war.

The experts' verdict is damning. "The diplomats were aware of the Jewish policy throughout," they write, "and actively involved in it." Cooperating in mass murder was "an area of activity" of ministry staff "everywhere in Europe."

Fischer had commissioned the study in 2005 to settle a heated dispute in his ministry about the extent of its historical guilt. The results are unlikely to calm the controversy. Fischer was shocked by the findings. "It makes me feel sick," he said.

The head of the commission, Eckart Conze, even described the Foreign Ministry as a "criminal organization" in an interview with SPIEGEL (to be published in English later this week). That was the term used at the Nuremberg Trials to describe the SS. Conze's assessment amounts to a condemnation of Germany's upper classes during the Nazi era. No other institution had so many members from illustrious families on its staff -- the Weizsäckers, the Bismarcks, the Mackensens.

The historians' findings about the ministry in the post-war West German era are also explosive. Chancellor Konrad Adenauer, who had the job of foreign minister from 1951 until 1955 during his tenure as West German leader, allowed former Nazis to remain on the ministry's staff even though he was well aware of the roles they had played under Hitler. Diplomats with Nazi pasts were posted in Arab countries and Latin America where they were unlikely to encounter public criticism.

The situation didn't improve much when the center-left Social Democratic Party came to power in 1966. Willy Brandt, who resisted the Nazis and emigrated during the 1930s, became foreign minister and then chancellor. But he continued to work with Ernst Achenbach, a foreign policy expert for the Free Democratic Party in the 1960s and 1970s, who -- according to the commission -- was involved in the deportation of Jews from occupied France during the war when he was a high-ranking member of the German embassy in Paris. Right up until 1974, Achenbach blocked an agreement between West Germany and France to permit the prosecution of Nazis who had committed crimes in France.

Well into the 1980s, during the tenure of Foreign Minister Hans-Dietrich Genscher, historians ran into a wall of silence when they wanted to dig for incriminating documents in the ministry's archives in order to refute the official version of events -- that it had been "haven of resistance."

Former Foreign Minister Steinmeier says the study's findings about the post-war years were among the most depressing passages. He said it was "incredible" that it had taken 60 years to conduct systematic research into the history of the ministry. The study was only launched because Fischer got into an argument with his staff.

Fischer says the trigger was a "ridiculous obituary" circulated among staff in 2003 about Franz Nüsslein, who had been a diplomat in the West German Foreign Ministry. The text declined to mention that Nüsslein had been senior prosecutor in Prague during the war and had been partly responsible for hundreds of executions there. Fischer, who was foreign minister at the time, ordered that the ministry should refrain in future from honoring former Nazi party members.

This ban was applied for the first time a year later after the death of Franz Krapf, West Germany's ambassador to NATO under Genscher. He had been a member of the Nazi party and the SS.

Former diplomats rebelled against the ban and many active members of the diplomatic service joined the protest. They argued that it was unfair to condemn staff who had been members of the Nazi party, and 128 former diplomats put a large death notice in the respected Frankfurter Allgemeine Zeitung newspaper in defense of Krapf's honor.

Surprised by the reaction, Fischer responded by hiring the commission. He feels that the findings have confirmed his stance. "That's the obituary these gentlemen deserve," he said.

But Fischer's victory isn't that clear-cut. The study shows that membership in the Nazi party in itself says nothing about the extent of involvement in crimes. But above all, it isn't as balanced as the studies that usually put debates such as this to rest.

It contains repeated references to "the" diplomats even though they didn't all commit crimes, as the book itself emphasizes in another passage. In addition, it assumes that diplomats had demonstrated their support for the "Final Solution" -- the term the Nazis used for the Holocaust -- just by reading the reports filed by the murderous death squads and signing them as read.

The study also creates the impression that several diplomats were involved in murders, but then fails to provide proof.

For example, Krapf was stationed at the German embassy in Tokyo during the war. The historians write: "Little is known about Krapf's activities (editor's note -- in Japan), but it's clear that German diplomats dealt with the 'Final Solution' of the Jewish question even in the Far East." That is supposed to mean: Krapf took part in the genocide somehow.

Former diplomats won't be the only ones to scrutinize such passages. The historians are also likely to face criticism from younger diplomats because the study accuses staff members of having failed to question the official line right up to the 1990s. One high-ranking ministry official said that wasn't true. He pointed to research conducted long ago by the historian Hans-Jürgen Döscher about the crimes committed by diplomats. Staff members had read that research, the official said.

Contrary to the commission's claims, the ministry has already adopted a differentiated view of its own past, the official added. An official brochure published in 1995 says the ministry had contained "several fanatical supporters" and a "considerable number" of people who went along with the Nazis and were indifferent about their crimes.

In a sign of how sensitive the study's findings are, Westerwelle cancelled a joint book presentation with Steinmeier and Fischer after the publishing firm said it planned a panel discussion between the three ministers and the historians.

Westerwelle seems to have had a feeling that he couldn't win in a clash with the eloquent Fischer, for whom confronting Germany's Nazi past has been a lifelong theme and who always relishes taking a swipe at Westerwelle.

New Approach to Dealing With Past

But Westerwelle too has praised the book as "a weighty piece of work" which would help reaffirm the ministry's sense of self. He wants to incorporate the book in the training course for young diplomats and to change the way the ministry observes its traditions.

The ministry also plans to revise any brochures that fail to mention the roles former staff members played during the Nazi era. In addition, it will take a closer look at the portraits of diplomats hanging on the walls of the ministries and of embassies.

It may well be that embassies follow the example of the London embassy, which mentions the Nazi past of Konstantin von Neurath, the foreign minister from 1932 to 1938, beneath a portrait of him. It may be that in future, only portraits of post-war ambassadors will be shown.

The study in itself represents a break with the past in one important respect: The foreign ministry has put itself at the forefront of historical research into its past. The other ministries largely ignore their Nazi history to this day.