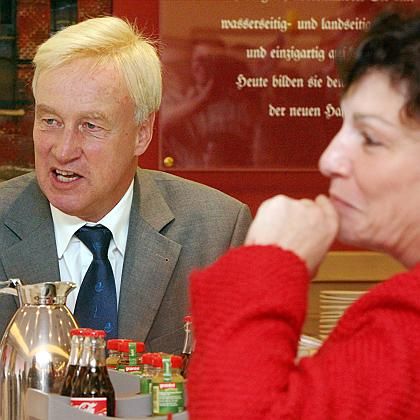 Members of the German Green Party and the conservative Christian Democrats (CDU) have arrived at an agreement "in principle" to govern together in Hamburg, SPIEGEL ONLINE has learned from Green Party sources. It would be the first CDU-Green coalition at the state level in German politics.

"We just have to put it in writing," said the source, who asked not to be named. "It's just a matter of the preamble (to the coalition agreement), and such things."

The coalition agreement will reportedly be unveiled late Thursday -- which implies that some points of disagreement, like a Hamburg-area schools policy and the fate of two coal-fired power plants, have been settled.

"We have nothing else to discuss in a full meeting," said a spokeswoman for the Greens, Antje Möller, after the last round of talks on Wednesday. The two sides had reached an understanding, she said, on "the points which still remained."

Hamburg is not just a city but also a self-governing state within the German Federal Republic. A state election on February 24 failed to give any party a clear victory.

The Christian Democrats, who won about 43 percent of the vote, had only left-leaning coalition partners to choose from -- their mainstream rivals the Social Democrats (34 percent), or the once-marginal Greens (9.6 percent). The upstart Left Party also won a small fraction. But the CDU's traditional coalition partner, the business-friendly FDP (Free Democrats), failed to jump the 5-percent hurdle for representation in Hamburg.

Breaking the CDU-Green taboo may open the coalition game in Germany to all sorts of permutations, including a CDU-Green government at the national level. Traditional pairings from just one end of the political spectrum can no longer be counted on.