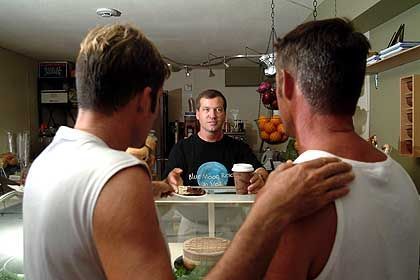 Berlin, Germany is one of the world's most tolerant cities, but homophobic attacks are on the rise -- partially due to illiberal immigrants.

Rapper Bushido is a half-Tunisian German who finds himself popular with a surprising range of teenagers in Germany, from Turkish kids to neo-Nazis. He says he hates Nazis -- among other people -- and he played an open-air festival last summer in Berlin that was billed by its teen-magazine sponsors as a "concert against violence."

But a group of gay-rights protesters showed up with signs. They said Bushido was the wrong poster boy for a tolerance festival. Their posters quoted his songs.

One read, for example: "You faggots will get gassed."

Or: "Berlin's getting tough again / 'Cause we beat up all the fairies."

"He just flipped us off," he said. And people cheered.

The story seems to capture an odd German trend -- rising intolerance wrapped up in faux-tolerant pop culture, which Finke says "trivializes violence." Maneo runs a hotline for victims of gay hate crime, and it recently released results of a new poll that suggest an increase in homophobic crime in Germany.

Maneo reports that 40.6 percent of the 17,500 men who responded to the Germany-wide online poll say they suffered hate crimes in 2007. The crimes include anything illegal under German law, from verbal insults and spitting to serious assault. But the number is up from 35.5 percent in 2006.

In Berlin -- one of the most tolerant cities in the world, at least for gay men -- the percentages are higher. Out of 2,150 respondents, 43 percent reported hate crimes, up from 39 percent in 2006.

Finke admits the poll was "not representative" of Germany's entire gay population, and Alexander Zinn, head of the Lesbian and Gay Association in Berlin-Brandenburg, isn't alarmed by the 5 percent rise. He says the group that responded for 2006 "wasn't necessarily" the same group that responded in 2007, so the numbers should be treated with caution.

Violence against gay men has been rising here for years, said Zinn. "Especially among teenagers, we've noticed there's more homophobia, mainly because of demographic changes in Germany," he said. "We have a growing immigrant population from many countries where homosexuals are taboo."

The most obvious group is Bushido's -- Muslim kids raised in Germany, who feel sidelined, who soak up hip-hop and who might have been raised to hate homosexuals. 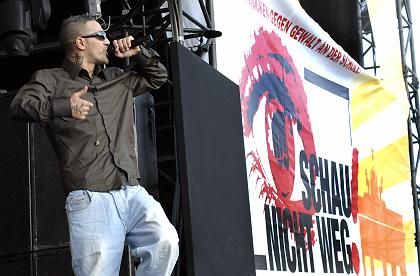 Bushido, the Tunisian-German superstar with the Japanese name, at a "concert against violence" in Berlin.

Last autumn, Germany's Lesbian and Gay Association conducted a poll financed by the federal government that showed stark levels of homophobia among Turkish teenagers. Two-thirds of high school students in Berlin with Turkish backgrounds, the poll found, had homophobic views of gays and lesbians. The study also found a direct link between levels of integration and homophobia. Teens who were more deeply religious or felt discriminated against in their own lives had a tendency to have more homophobic views.

After the report's release last fall, Eren Ünsal, a spokesperson for Germany's Association of Secular Turks, expressed her concern about the findings. "We began our first effort to combat homophobia in our community," she told SPIEGEL ONLINE. "But it is also important that we not back people who are opposed to homosexuals into the corner." Ünsal said she hoped that an open debate within the community would contribute to a slow shift in mentality. But she also warned against making generalizations about Turks, noting that, "not every Turk is homophobic."

Nico Hartong, a musician and Berlin social worker who helps kids write and record their own rap songs, believes the core of the problem is simple machismo rather than Islam.

"I think it's that Islamic kids (in Germany) have a problem with manhood," he said. "And homosexuality just doesn't fit into that image at all."

Germany, of course, has native-born thugs who can't stand homosexuals. The same neo-Nazis who bash immigrants are happy to beat up gays. But liberal-minded Germans know how to deal with neo-Nazis -- the extreme right is a familiar German fact of life. What's more confusing is how to contend with immigrants who are less tolerant than the Germans who want to accept them.

"The problem is that we have standards in Germany, we have laws against hate crimes here," said Finke. "But the laws aren't always followed. Of course racism is bad -- we say that too. But there's a double standard when it comes to violence against gays. And I think gays in Germany feel this discrepancy more and more."

Immigrants from Muslim nations obviously have no lock on hate crimes in Germany. The other big place in the world where homosexuals are "taboo," as Zinn would put it, is Russia. Indeed, the poll of Berlin teens found that half of the Russians surveyed had homophobic views.

Riots and arrests at the Moscow gay pride parade have become a reliable springtime event since 2006, when the first gay activists to attempt a public, post-Cold War demonstration "were heckled and assaulted by skinheads, Orthodox Christians and radical nationalists," according to the Washington Post. Russian machismo, like the Islamic version, sees homosexuality as something foreign. And the attitudes can be perfectly mainstream.

"For Russia, gays are not an organic development," playwright Ilya Resnik told the German newspaper Die Zeit last year. A former governor of Novgorod, Mikhail Prussak, agreed. "A normal man can't just react calmly to these men," he told the newspaper. "They have to be dealt with and healed."

The result, on German streets, is rising intolerance. Finke says anecdotal evidence from his hotline shows a problem with Russian abuse. A Turkish activist named Bali Saygili, who runs a counselling group in Berlin for gay immigrants, agrees.

"It's not just insults," he recently told the leftist Berlin weeklyJungle World. "I've been spit on, too. A Russian woman said she knew homosexuality wasn't illegal in Germany, but if it was up to her, she'd put me up against a wall and have me shot."

Saygili said this kind of treatment had made him thick-skinned. "Now I think people who can't accept democratic rules in this country also shouldn't be nationalized."

But no one, not even Finke, believes hate crimes against homosexuals became a sudden problem in Germany last year. The trend has been brewing for a while. Hartong says insulting "fags" is an old theme in German hip-hop, but a new "hard-core style" -- with rappers like Bushido posing as American gangsters -- has caught fire.

"Kool Savas (a Turkish-German rapper) wrote songs like that in the 1990s," he said. "It's just that Bushido now reaches so many more people. He's a phenomenon, he really is. He's the most popular rapper in German history."