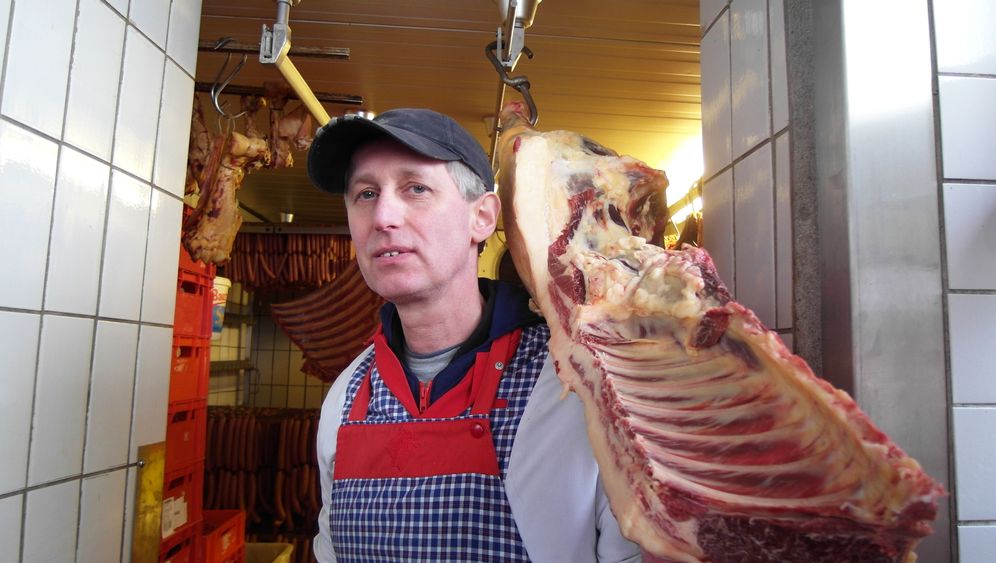 The spicy smell of smoked meat rises from the sales counter and fills the cold air, while soft radio music mixes with the whirring of the refrigeration system. Uwe Poggensee, 51, is standing behind the counter of his horse-only butcher shop in the Eimsbüttel district of Hamburg. The sleeves of his white overalls are rolled up and he's wearing a butcher's apron.

The meat giving off this strong aroma can also be found in mislabeled lasagna dishes that have caused an uproar and a major scandal throughout Europe. But while major supermarket chains in Germany, including Kaiser's Tengelmann, Real and Edeka, have pulled the lasagna out of their freezers, there is mounting interest in horsemeat among some Germans. "All the furore has actually only had positive effects for us," Poggensee says, adding that several new customers had come to his shop in recent days because the controversy had made them curious about horsemeat.

Poggensee was a young boy when he first started helping out in his father's slaughterhouse, which had been in the family for three generations. However, in 1988, he broke with that long tradition, left the business and took over the horsemeat butcher shop he now runs in Hamburg. "We were forced to think about where we would be able to sell our meat," Poggensee says. "So, at 27, I was thrown into being my own boss."

Now, 25 years later, Poggensee's butcher shop has become an institution in this corner of Hamburg, with a clientele almost exclusively made up of regular customers. Whether it's workers in neon-orange vests or smartly-dressed lawyers, they come here to grab the lunch special of foal goulash or horse sausages.

Most of the customers also happen to be the type of people who didn't have horse posters on their walls in their childhood years -- in other words, men. "I've been eating horse since I could walk," says Gunnar Kron, a 47-year-old craftsman. He says he comes to Poggensee's butcher shop two or three times a week, and that he likes horsemeat because it's healthy and has a strong flavor. Indeed, for the uninitiated, horse does taste a bit gamier than the beef most people are used to.

Krons says that horse is often served at get-togethers organized by his company. "And, in the evenings," he adds, "I go riding."

Poggensee agrees that loving horses doesn't mean you can't eat them. "I've always had a good relationship with horses," he says. He keeps horses on the paddock behind his farm. He doesn't have much time for riding, so they're looked after by a groom. "Horses are companions to people," says Poggensee. "That has to be respected."

Poggensee's horsemeat comes exclusively from private owners in the region. The animals are slaughtered in his brother's abattoir. When business is good, he buys and processes five to six horses a week. But the supply is unreliable.

"There is no intensive farming of horses," explains Poggensee. Most of the horses he buys are old or injured animals that can't be used for riding any more. "In many cases, slaughtering them is putting them out of their misery," says Poggensee. "Many owners stay with their horses until the last moment, and you often see them in tears."

Horse-only butcher shops are dying out. The one in Eimsbüttel is one of about 70 in Germany. On average, Poggensee and his wife serve about 150 customers a day. "Ten years ago, it was more like 300," says Uwe Poggensee.

The popularity of horsemeat fluctuates, with customers favoring it mainly when times are tough: a lot of horsemeat was eaten after the two World Wars, for example, because it was cheaper and there were more work horses in use than there are these days.

"There was also a boom in the wake of the BSE scandal," says Uwe Poggensee. "We were selling as much horsemeat in one hour as we normally sell in a day." They even ended up running out.

Who knows, the latest scandal may end up paradoxically producing the next horsemeat boom.