Since Monday, German hospitals have been on orders to postpone non-essential operations that can be planned in advance and other procedures for things like hip replacements, painless kidney stones or polyps in children in order to free up capacities for potential coronavirus patients. The decision for postponement was made in a meeting between the federal government and representatives from Germany's 16 states on Friday. In a letter sent to all hospitals, a copy of which DER SPIEGEL has obtained, German Health Minister Jens Spahn wrote, "A decision of this magnitude affecting hospital operations has probably never been made before in Germany."

This step and others have been taken in order to get ready for the time when a growing number of people who are infected with the coronavirus SARS-CoV-2 and become seriously ill will need to be admitted into hospitals. Recent developments in Italy show just how rapidly the number of infections can rocket from one day to the next and how quickly the health system can be pushed to its limits. In Italy, doctors have been forced to make life or death decisions in recent days over which patients are provided with ventilators and which ones are not. The measures now adopted in Germany are intended to prevent such a situation.

But how quickly are hospitals responding to Spahn’s "urgent appeal"? Are procedures really being cancelled; are intensive care unit beds being freed up? "We had to cancel all operations on Monday because I had been in a risk area myself and hadn’t been tested yet," a chief physician at one northern German hospital told DER SPIEGEL. "Apart from that, we haven’t postponed any specific procedures yet, because there are no corona-infected patients in our hospital."

Another chief physician in Hamburg said he felt Spahn’s demands were exaggerated and added that his hospital is also continuing to perform operations. Of course, he said, the situation will probably be different in two or three weeks, but until then it would neither be medically nor economically sensible to cancel all operations. The doctors said the departments could be reconfigured very quickly at both hospitals, but also that some patients had already cancelled operations on their own initiative.

An anesthesiologist at a municipal children's hospital reported the situation is similar where he works. "Some parents have cancelled operations as a precaution," says the doctor, "a hernia or a gastroscopy usually doesn’t have to take place immediately." He said things were pretty much business as usual at the hospital on Monday and that they were still performing outpatient operations. "Otherwise, we wouldn't have anything to do at the children's hospital right now," said the anesthetist.

The Calm Before the Storm?

In terms of coronavirus patients, things are still quiet in many hospitals in Germany, and by no means will all facilities have to be hectically converted into emergency facilities. When contacted by DER SPIEGEL, the Schön-Kliniken, a company that operates 26 hospitals in Germany, said that clinics that don’t have intensive care facilities are operating just as they have until now. The company said the same applied in orthopedic specialist clinics. "By continuing with operations and treatment methods, they are actually relieving other hospitals in Germany that are reserving beds and medical staff for increased care capacities," the company’s corporate communications department wrote in an email. The company said is also has locations with several intensive care beds that could be set up with ventilators at short notice and that preparations are already underway.

ANZEIGE
Coronavirus, COVID-19 and SARS-CoV-2: An Explanation of Terms

Coronavirus: Coronaviruses are a family of viruses to which the pathogen currently spreading around the world also belongs. Because it didn't have a name at the beginning of the pandemic, it was simply referred to as "novel coronavirus."

SARS-CoV-2: The World Health Organization (WHO) gave the novel coronavirus the name SARS-CoV-2, which stands for "Severe Acute Respiratory Syndrome-Coronavirus-2." The name refers to the virus which can trigger symptoms, but may not.

COVID-19: The illness triggered by the SARS-CoV-2 virus is called COVID-19, which stands for "Coronavirus Disease-2019." As such, COVID-19 patients are those who have been infected with the virus SARS-CoV-2 and are showing symptoms.

The Helios-Kliniken, another chain of hospitals, is also only postponing procedures "if a medical assessment determines it can be assumed that the patient can manage without this care for the next two months." The company said that all procedures that cannot be delayed, will be carried out as quickly as possible in order to take advantage of the capacities that are still currently available."

Mathias Eberenz, spokesman for Asklepios, which operates 160 hospitals, told DER SPIEGEL, "Arthroscopy can certainly be done at the moment, but we are keeping resources free for ventilation patients and we also have the ability to create additional beds with ventilators. We are responding to the federal government’s request and we are monitoring the intensive care capacities we have available daily. We are gradually freeing up our intensive care capacities in internal medicine and postponing any unnecessary operations that can be planned in advance and would require significant care afterward."

Spahn's urgent request for the postponement of non-essential operations and procedures now clearly isn't being implemented everywhere. The companies need a little time, but they have made clear that as soon as things start getting tight, they will reassess the situation each day. This constant reassessment appears to be the basis for all important decision-making happening right now. That’s also useful from a medical perspective: Why leave an operating room empty today when a person suffering from pain could still be treated today, particularly given that treatment tomorrow might not be possible due to the corona crisis?

Of course, hospitals also have other interests in mind. Hospital doctors have been claiming for years now that their employers focus too much on profits and that the bottom line often takes precedence over a patient’s well-being. Close to 250 doctors and organizations recently warned in the weekly news and lifestyle magazine Stern that cost pressures in health care are causing massive damage, because hospitals are normally paid for the services they provide. Providing one hip operation after the other on an assembly line is a valuable source of revenue. Very few hospitals can afford to have their operating theaters empty for longer periods of time.

The Schön-Kliniken company even warned that the current situation has the potential to create financial problems for hospitals. This is because there is no mechanism in place for compensation payments right now. In his letter to the hospitals, however, Spahn pledged that action would be taken on that front. "The federal government will quickly adopt measures to ensure that the resulting economic consequences for the hospitals are compensated and that no hospital will end up in deficit. In addition, we are planning to provide a bonus for every additional intensive care bed that is provisionally created and made available."

But Who Will Care for the Intensive Care Patients?

Uwe Janssens, chief physician at the Clinic for Internal Medicine and Internal Intensive Care Medicine at the St. Antonius Hospital in the city of Eschweiler in North Rhine-Westphalia, also estimates that the number of free intensive care beds can be increased by 30 to 60 percent if non-essential procedures – such as knee operations, gallstone removal or intestinal surgery – are postponed.

And this is the point where the problems come to light. Germany is by far the leader in Europe in terms of the number of of intensive care beds it has in relation to the number of inhabitants. Of the 497,000 beds in German hospitals, 28,000 are intensive care beds. But it is likely that patients are in fact going to be filling a lot of those beds. And they will have to be provided with care. By who though? They will need care from qualified professionals, and there is a major shortage of nurses in Germany right now. "We have been drawing attention to the shortage of skilled workers for years now," said Asklepios spokesmen Eberenz. "But the cries for help from the hospitals, which have already been stretched to the limits for so long, haven’t helped much."

The shortfall, which could get even bigger as medical workers themselves get sick with COVID-19, is now supposed to be filled with doctors from health insurance companies not currently working in hospitals and those who have switched to the administrative side at clinics. The German Health Ministry has also indicated that doctors could be recalled from retirement and students studying medicine could be deployed as assistants. Furthermore, Spahn has called on hospital administrators to train and provide instructions to other hospital workers in preparation for a worst-case scenario. The chief physician in Hamburg confirmed that nursing staff who hadn't worked in intensive care for some time are receiving refresher training for.

But how well will these measures ultimately work? If things get tight, then everyone will have to do their best, said the anesthesiologist at the children’s hospital. "We work on a shift system in the wards. If there is no one left, you just have to work a second shift. And hope to be relieved afterward." 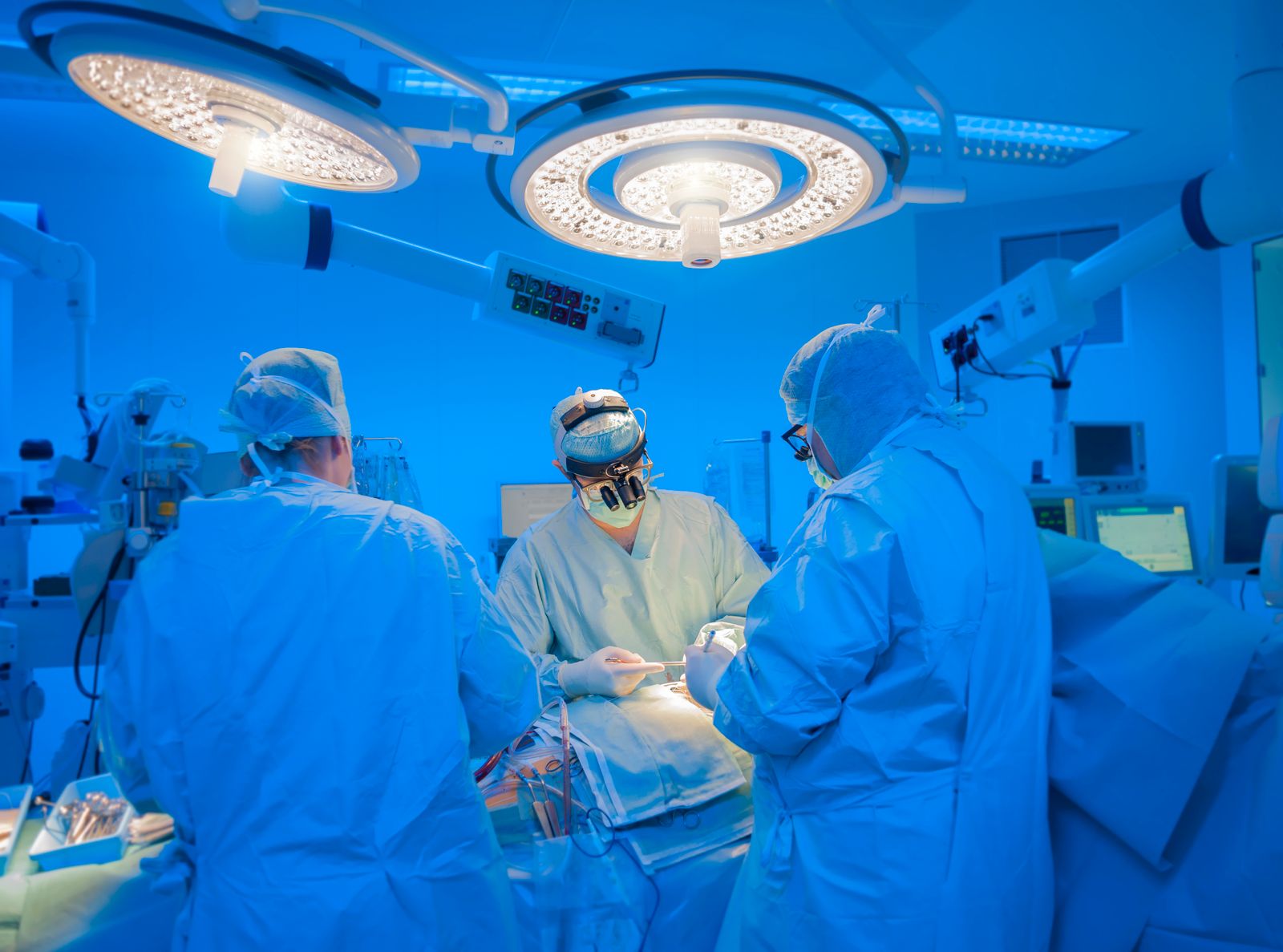 Germany has asked its hospitals to postpone any non-essential operations and procedures.