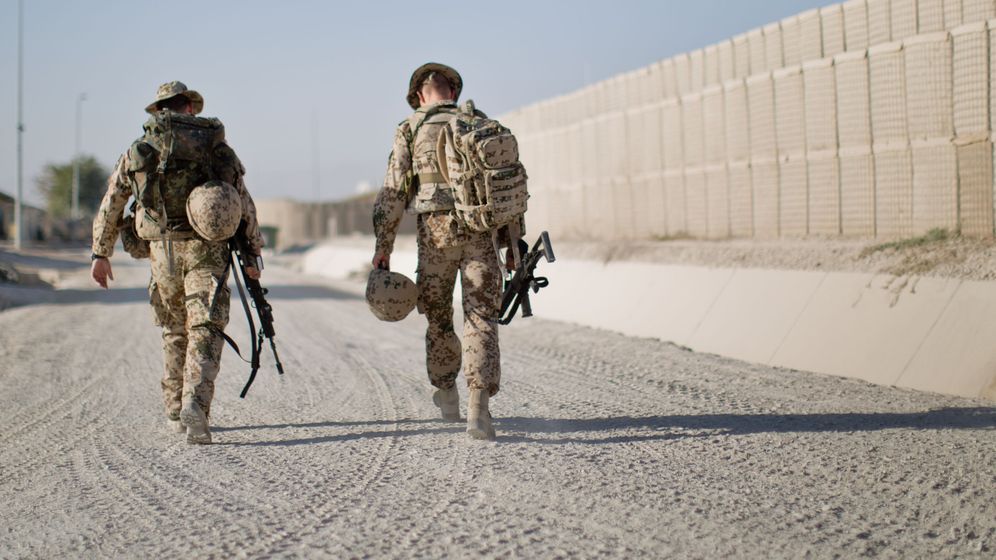 The German military entered Afghanistan over a decade ago as a peacekeeping force tasked with aiding in the reconstruction and development of infrastructure and civil society. Today, it leaves the country as a combat force that engaged in deadly warfare.

The evolving role of the Bundeswehr, Germany's armed forces, in the conflict has helped to dramatically reshape it as a more experienced and capable fighting operation. Yet the German public has become even more opposed to military engagement overseas than it was 10 years ago, calling into question what sort of role the Bundeswehr will play in supporting NATO and the United Nations in future international conflicts.

"Afghanistan has been the most important experience for the German armed forces. It was the first time since World War II that the German military was involved in real combat action," says retired General Harald Kujat, the former Chief of Staff of the Bundeswehr from 2000-2002 and former Chairman of the NATO Military Committee from 2002-2005. Kujat says the Afghanistan experience has created a new generation of young officers with personal combat experience, contributing to a "more self-confident" Bundeswehr. The expertise gained by many of these soldiers has made the Bundeswehr a more educated military, better able to weigh the pros and cons of war and what it is capable of contributing to a given mission, explains Kujat.

Indeed, for much of the war, the military command did not adequately communicate to the German political leadership what the actual situation on the ground was -- a war zone -- and what equipment soldiers needed, says Roderich Kiesewetter, a parliamentarian with Chancellor Angela Merkel's conservative Christian Democratic Union (CDU) and former Bundeswehr officer.

Kiesewetter cites the apparent failure of the military to correctly advise politicians about the war as a major factor in a controversial 2009 German-ordered air strike on two hijacked tanker trucks that ultimately left dozens of civilians dead. The German commander involved "did not have the reconnaissance means to detect what was going on," Kiesewetter notes. The Bundeswehr has since learned how to more transparently advise politicians on its aims, he says, even if it still has more to learn about acting as an offensive -- and not merely defensive -- force in pursuing its political and military objectives.

The Bundeswehr's development in Afghanistan into a "real fighting force" has had a significant impact on recent reforms implemented by the Defense Ministry, says Christian Mölling, an international security associate with the German Institute for International and Security Affairs (SWP). The ministry, Mölling explains, is working to streamline the Bundeswehr and make it a "highly deployable force." But the political discourse has not caught up with the military advances, he argues. "There has been political disengagement from a comprehensive, multilateral defense policy."

Germany -- the third-largest contributor to the US-led coalition in Afghanistan and the country responsible for Regional Command North -- has lost 54 soldiers since 2002, 35 of whom died during attacks or fighting. The Bundeswehr has now begun to slowly withdraw troops from the country ahead of a December 2014 deadline, officially handing over command of the Kunduz base, in northern Afghanistan, to Afghan security forces earlier this month. The remaining 900 German troops at Kunduz are expected to withdraw by the end of October, bringing the total number of German troops in the country to around 3,100.

While the overall success of the International Security Assistance Force (ISAF) has been hotly contested, Kujat argues that the military aspect of the NATO mission worked "quite well," including the German contribution. "The political part of the mission did not succeed," he says, alluding to governance issues, a weak civil society, and the failure of Afghan forces to take full control of the security situation. The growing sense in Germany that the efforts of coalition forces -- particularly German troops -- in Afghanistan were for naught has made Germans even "more reluctant now to engage in military operations," says Kujat.

German support for the war has dropped significantly since the start of the conflict, from 65 percent in 2005 to 37 percent in 2011, according to the Bundeswehr Institute of Social Sciences. "The lesson learned by the German public was that it wasn't worth the money," says Olaf Boehnke, head of the Berlin office of the European Council on Foreign Relations and a former parliamentarian with the center-left Social Democratic Party. German public opinion reverted to an anti-war stance because Germans largely believe "it didn't work out," argues Boehnke.

A turning point may have come in 2009, when former German Defense Minister Karl-Theodor zu Guttenberg became the first German official to label German operations in Afghanistan as a "war," bringing the reality back home to the German public. "The preferred German perception is of the German soldier building schools and digging wells in Afghanistan," notes Boehnke. Germans, he says, would still rather be security consumers than security providers. "People still believe in this big Switzerland idea," says Boehnke, "that we don't have to go outside our borders."

Despite German reluctance to engage in future military endeavors, it is likely Germany will be called on to assist with future international armed missions, says Patrick Keller, an expert on foreign and security policy with the Konrad Adenauer Stiftung, a foundation associated with the conservative CDU. "It's not too far fetched that we will have to be prepared to act" in potential conflicts in the Middle East and North Africa region or in central and eastern Europe, argues Keller.

However, Keller acknowledges an inherent tension between Germany's "strategic interest," which he says is to help protect a rule-based, liberal international order, and its "political will," which he believes is hobbled by a post-war disinclination to use force. This schizophrenia played out in 2011 when Germany declined to support the United States, France, and Britain in authorizing a no-fly zone in Libya, abstaining from the vote at the UN Security Council. Still, Keller adds, "Germany has increasingly shouldered more responsibility."

'A Question of Responsibility'

But how much responsibility is Germany actually willing to bear? The question comes back to the broader issue of Germany's hesitation to play a leading role in European Union and global affairs. "Germany has a great difficulty in taking on leadership. We don't want to be in a leadership position," be it about security issues or the euro-zone crisis, says Stefani Weiss, a European foreign and security policy expert at the Bertelsmann Stiftung.

Similarly, SWP's Mölling says Germany could play a "significant and positive" role within NATO and the EU on defense issues given its central location in Europe, if it were not for a lack of political will. "It's a question of responsibility. We don't feel we are responsible for finding a solution to international conflicts."

But parliamentarian Kiesewetter suggests Germany should begin to take on a greater leadership role in helping Europe develop a cohesive security policy and a shared military apparatus -- if only to help it cope with fiscal constraints imposed by the euro crisis. "There is a need for leadership within the EU," he says. "Germany could be a partner to create synergy between EU states … to take over responsibility where others are not willing to." 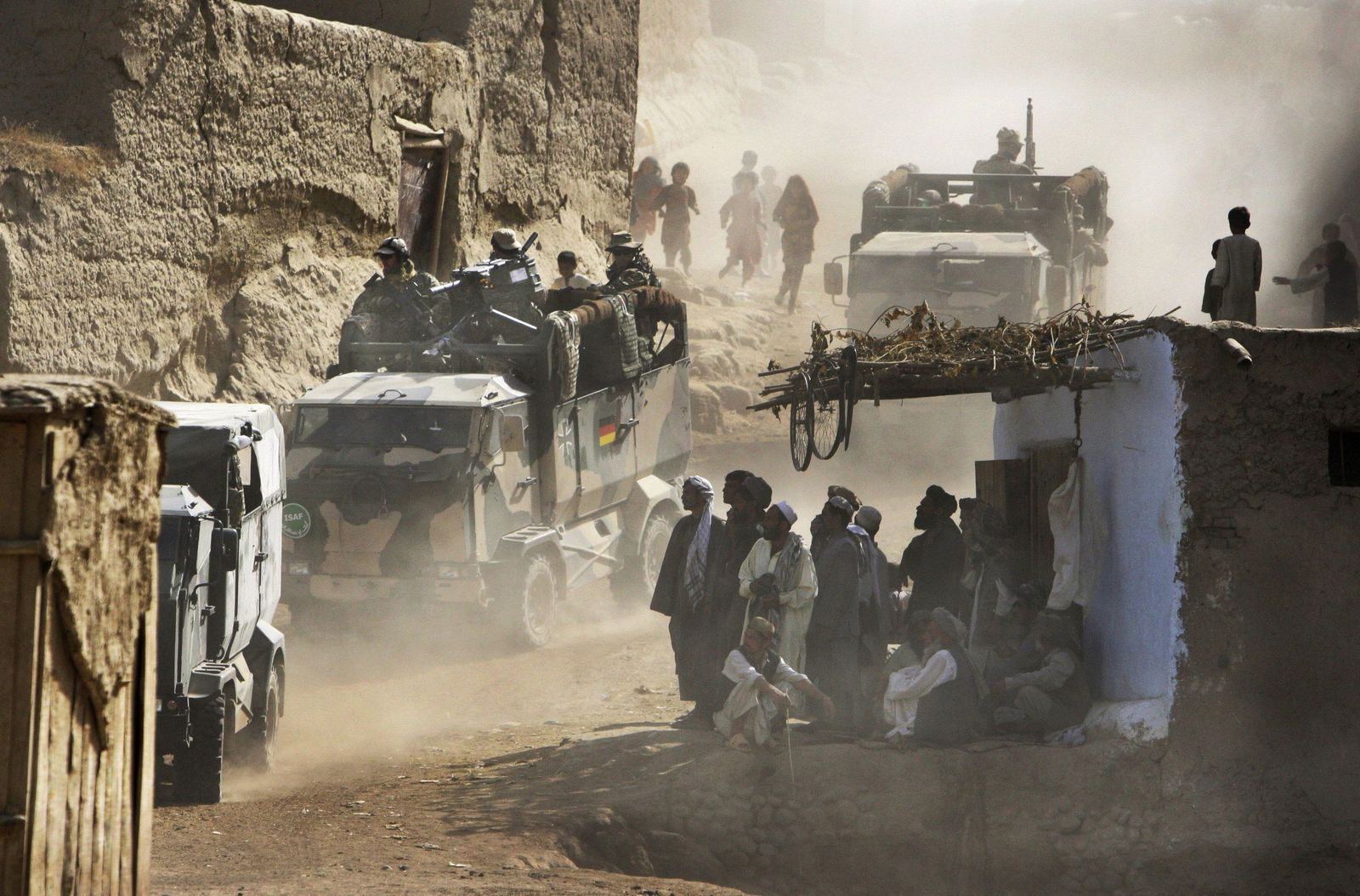 German public support for the war has dropped significantly since the start of the conflict, from 65 percent in 2005 to 37 percent in 2011, according to the Bundeswehr Institute of Social Sciences. Here, German soldiers patrol on the outskirts of Kunduz in 2008.