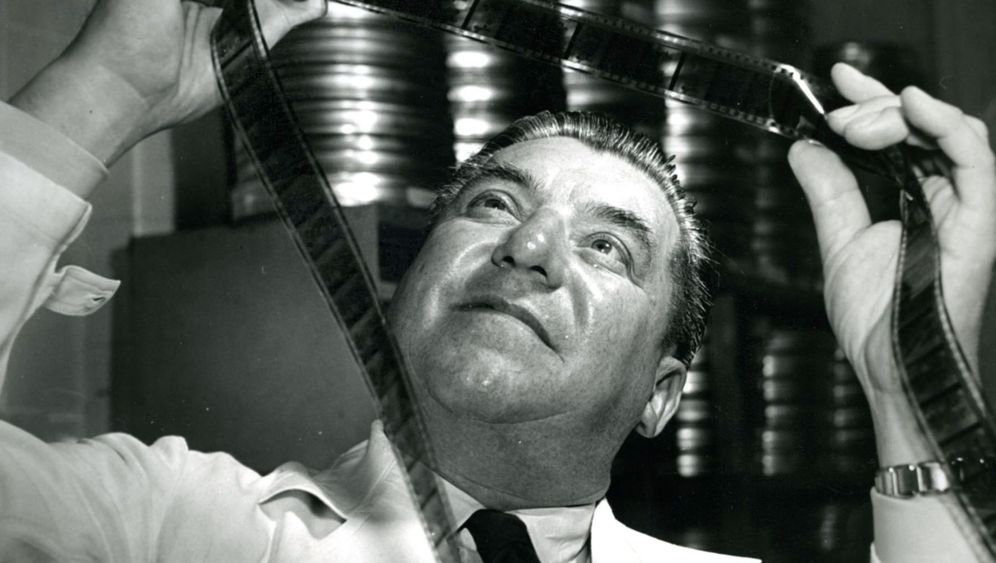 It's almost like a scene from a Hitchcock film. A full moon casts a beautiful, sleeping blonde in a gloomy light. She tosses and turns, visibly tormented by her dreams. Dramatic music swells to a foreboding crescendo. She awakes. Her bed has given way to nothingness. She's in free fall, plunging downward between towering buildings. A pair of red hands grasps for her neck. She tries to scream, but no sound escapes her lips.

Finally, the light of dawn releases the woman from her nightmare. She sits up in relief. Accompanied by a victorious fanfare, a bottle of Underberg digestive materializes in a congenial glare. A voice in the background proclaims: "Underberg soothes and relieves discomfort."

The unusual commercial "Durch Nacht zum Licht" ("Through the Night to the Light"), which was used to promote Underberg herbal bitters in Germany in the 1950s, was just one of hundreds of seminal works by Hans Fischerkoesen, Germany's most influential cartoonist. A century ago, "Germany's Walt Disney," as he would later be called, brought the first animated film to German cinemas and secured a place for himself in history.

Born in 1896 in the small town of Bad Kösen, in the eastern German state of Saxony, Hans Fischer (who later created the alias "Fischerkoesen" by combining his name and birthplace) discovered art early in life. A bad case of asthma confined him to his bed for much of his childhood, during which he began drawing passionately.

This chronic illness allowed Fischerkoesen to avoid direct combat in the trenches of World War I. Assigned to be a radio operator instead, he was able to use his free time to draft sketches for his first film. As soon as the war ended, he assembled some basic equipment and began work on his vision.

What he accomplished was quite incredible. When "Das Loch im Westen" ("The Hole in the West"), a bitter statement about those who sought to profit from the suffering of society in the postwar era, premiered in 1919, it made film history as the first animated film produced in Germany. Today, only few people know what the film looked like since all of the copies have been lost.

Two years later, Fischerkoesen launched a highly successful advertising career with a popular ad for shoes. His lively drawing style and his pleasant, benign humor amused audiences and clients -- and soon helped him amass a fortune. With his sweetly smiling stick figures, talking animals and dancing everyday objects -- from lightbulbs to gas pumps -- Fischerkoesnen drew his ways into the hearts of the public.

Entertainment for the Defeated Masses

At the beginning of World War II, Fischerkoesen's career started moving in a different direction. The products that he had promoted so successfully were increasingly becoming luxury items. Blessed with success until this point, the illustrator found his career pushed to the verge of collapse.

But then it took an unexpected turn. Hitler happened to be a great admirer of Walt Disney and envisioned building a German animation industry to rival Hollywood's. Reich Minister of Propaganda Joseph Goebbels commissioned Fischerkoesen to produce cartoons that were technologically on par with Disney's.

While Europe was being reduced to ash and rubble, Fischerkoesen received enough funding to produce his three most important and most costly films. "Weather-beaten Melody" (1942) portrays a wasp's discovery of an old record player, which it reanimates with its stinger. In "The Snowman" (1943), the protagonist decides to hide out in a freezer to wait for warmer temperatures, only to melt away blissfully in July. And in "The Silly Goose" (1944), a vain goose ventures beyond the borders of its farmhouse and has a sobering encounter with a fox. All three films had to be made without spoken dialogue so that they could also be used to raise the spirits of viewers in occupied regions of Eastern Europe.

Nevertheless, the films are not typical propaganda productions. American film historian William Moritz even claims to have found hints of subversiveness in the forbidden swing music of "Weather-beaten Melody," the snowman's anticipation of better days and the insubordinate conduct of the adventursome goose. But Fischerkoesen's son, Hans M. Fischerkoesen, is skeptical of these findings. "You could probably interpret it that way," he says. "But my father was completely apolitical. After the war, he never spoke about the time again." Indeed, the son views theories claiming that his father joined an anti-fascist group of artists with doubt. "We know that my father was not an NSDAP member," he says, referring to the Nazi party. "But he definitely wasn't a resistance fighter, either."

Immediately following World War II, Fischerkoesen was held in Sachsenhausen, a Nazi concentration camp just north of Berlin that the Soviets continued using as a detention camp after the war. "My father reportedly only survived captivity because he drew portraits of the Soviet camp guards, and they occasionally tossed him a piece of bread in return," the son says. Even the demoralizing life in the camp didn't manage to stifle his imagination. He covered the cellar walls below the camp kitchen with murals of potatoes and other anthropomorphized vegetables, which can still be found at the memorial site today.

After his release in July 1948, Fischerkoesen fled with his wife and two children from the Soviet-controlled area of postwar Germany to the French-occupied sector in the west. Once again, the drifting illustrator landed on his feet. In Mehlem, just south of Bonn, he founded Fischerkoesen Studios and resumed his successful career in the years of West Germany's so-called "economic miracle." With ad campaigns for Aral gas stations, the soft drink Afri-Cola and the candy maker Haribo, he was able to reach an audience of millions. At festivals, his films were showered with prizes.

Fear of an Empty Head

But success never blurred Fischerkoesen's vision, as he always remained open to new experiments. An ad for Linde's coffee, for instance, opens with an abstract interplay of shapes inspired by the product's blue-dotted packaging. For another humorous film, which was supposed to convince the audience of the power of Autoral gas, he combined stop-motion animation to set a car into motion with conventional cartoon animation to playfully visualize what was happening within the engine.

Fischerkoesen spent up to 70 hours in the studio each week. He single-handedly authored every script, composed every lyric and checked every drawing. His obsession with work often took a toll on his private life. His children only saw their father on Sundays and, even then, Fischerkoesen's sketchbook was never far away. He often sat in his easy chair working on outlines for his next film. "One time, I asked him what he wanted for his birthday," his son recalls. "There's only one thing I need," he said. "A new head -- because this one will be empty soon."

His fear soon turned into a self-fulfilling prophesy. Beginning in the mid-1960s, Fischerkosen found it increasingly difficult to keep up with modern developments. Movie shorts became briefer and briefer, and television now demanded shorter, snappier messages. All of a sudden, there was no more room for Fischerkoesen's narratives, which sometimes lasted up to five minutes.

"My father once joked: 'One has go with the times, or one has to go with time'," Hans M. Fischerkoesen remembers. In 1969, that time seemed to have arrived, and Fischerkoesen passed the animation studio on to his son.

But, even in retirement, the elder Fischerkoesen had a hard time slowing down. He had a vision: Intent on bringing a new form of puppet theater onto television screens, he established the company Telematik. Instead of using strings to coordinate the movements and facial expressions of puppets, he envisioned using remote controls with the Telematik characters. But the idea would never be realized. On April 25, 1973, Hans Fischerkoesen died of a stroke at the age of 76.

For a while, his son continued his father's legacy quite successfully. He specialized in educational films for pharmaceutical companies and became one of the pioneers of 3-D computer animation in Germany. But the success didn't last, and Fischerkoesen Studios was ultimately shut down in 2000.

But one invention has long outlived its creator. In 1958, Fischerkoesen created a cuddly mascot for the public broadcaster of the western German state of Hesse. "Uncle Otto," as the cartoon seal is lovingly called by his fans, still stars in the station's television programming today -- and reminds audiences of one of the greatest geniuses the German animation industry ever produced.