At the end of January, Angela Merkel flew to Davos, Switzerland, for a brief visit. At first glance, there wasn't anything particularly novel about her appearance at the World Economic Forum. The audience was receptive to Merkel's comments about the state of the world -- and even the podium was, as always, white. After her speech, though, there was a short question and answer session with Klaus Schwab, the forum's founder. And it wasn't long before Schwab turned his attention to the difficult process of forming a government in Berlin, speaking with a solemn expression on his face of the "difficult months" Merkel had gone through. "We're always there," he assured the chancellor in closing, and wished her all the best for the "remaining phase."

Remaining phase? It wasn't totally clear if Schwab was referring to the rest of the coalition negotiations or the rest of Merkel's tenure in the Chancellery. Merkel, for her part, was quick to assure that sympathy was completely unnecessary. Like every chancellor before her, Merkel has developed a certain routine when it comes to confronting reports of the approaching end of her time in office. But ever since the German general election last September, there has been a whiff of farewell hovering over everything. In that vote, Merkel's conservatives suffered their worst result since 1949, and if indications aren't completely misleading, it looks as though Merkel is in the process of arranging for a successor to lead the Christian Democrats (CDU) once she's gone.

Germans are strangely divided over the woman who has governed for so long that the younger generation can no longer remember a time when a male chancellor led the country. On the one hand, there is a desire for change, a Merkel fatigue that made itself apparent in the brief hype surrounding the launch of Martin Schulz's candidacy a year ago, but also in the rise of the anti-Merkel party, the Alternative for Germany (AfD). On the other hand, Germans seem to be afraid of the very change they long for, with 51 percent of voters in favor of Merkel remaining chancellor. Behind Foreign Minister Sigmar Gabriel, she is the most popular politician in Germany.

The protracted search for a new government is, of course, bothersome. The early excitement surrounding the possible creation of a governing coalition the country had never seen before -- one which would have matched the conservatives together with the Green Party and the business-friendly Free Democrats (FDP) - ultimately gave way to the very German yearning for order. But is such an explanation sufficient?

Merkel's tenure has changed Germany much more fundamentally that it might seem at first glance. Significant shifts in postwar German history have tended to be connected to specific personalities in the role of chancellor. The patriarch Konrad Adenauer ultimately gave way to Willy Brandt, who insisted the country take a chance on more democracy. The strait-laced Helmut Kohl had to move aside after 16 years for the charismatic lout Gerhard Schröder. German politics adhered to a sensible rationale: moving from one chancellor to the next without shaking the country's political foundations.

But it is completely unclear what will come after Merkel. One of the characteristics of the later Merkel years has been that all political impetus is derived entirely from her. It begins with the AfD, whose name itself is a reference to Merkel's famous declaration that there was no alternative to saving the euro. Depending on your perspective, the AfD is either the ugly child of the Merkel era or an expression of a healthy democracy. But there can be no doubt that there would never have been an AfD without Merkel. For the right-wing populist party, she is both a mother figure and the focus of hatred. The party rejects nobody as vehemently as it does Merkel. Indeed, the emotion inherent in the party's repudiation of the chancellor is reminiscent of a family feud.

Like all conservatives, Merkel naturally emphasizes that her goal is that of fighting the AfD and pushing them out of the German parliament. But she is also the person who continues to feed the AfD's passionate hatred, which is why it is highly unlikely that the party will disappear for as long as Merkel's remains on the political stage.

A popular question these days is what, exactly, will remain from the Merkel era once she is gone. Adenauer is known for anchoring the country in the Western community of nations. Kohl's legacy is the introduction of the euro. But one can make the argument that with her political style, Merkel changed the country more fundamentally than any of her predecessors.

The dominant trend these days is that of the political movement. Ever since Emmanuel Macron turned his back on the Socialist Party in France and waltzed into the Élysée Palace as head of the En Marche! movement, ever since Sebastian Kurz in Austria subjugated the Austrian People's Party (ÖVP) and rose to become a new kind of chancellor in the country, the established big-tent parties seem strangely outmoded, trapped in a corset of rituals and ideological constraints. But it was likely Merkel herself who first realized how potent it could be if the party leader emancipated herself from her own party's doctrine.

Merkel has never had the kind of charisma possessed by Macron. And she certainly didn't transform the CDU into a vehicle of her own ambition with the vehemence and speed that Sebastian Kurz transformed the ÖVP. But the persistence with which she relieved the party of everything that once distinguished it from the political competition had a similar effect over time: What ultimately mattered was no longer the common convictions held by the party, but the party chair's determination to cling to power. The CDU was transformed into Merkel's own personal political party.

Merkel, and the CDU, have profited from that development in many ways. Merkel attracted new groups of voters to the party, she opened up the possibility of forming governing coalitions with the Green Party and she robbed the Social Democrats (SPD) of their most important political issues. On the way, though, the competition of political ideas -- the policy conflicts that are the lifeblood of democracy and which provide voters with direction -- was lost. As was the CDU's identity.

The result is a battle over the party's direction that has been raging for quite some time, but has less to do with policy than with the question: "Where do you stand on Merkel?" There is a significant group of CDU members who would like to see the back of Merkel, led by Jens Spahn, state secretary in the Finance Ministry. His faction, though, is different thana similar group in the 1990s that came together to consider how to modernize the CDU on issues from foreign policy to gay rights once Helmut Kohl had left. Spahn, by contrast, defines himself almost exclusively through his opposition to Merkel.

It is rarely a good sign when a political figure becomes as dominant as Merkel has been. The SPD's election campaign was hampered by numerous errors, but that list surely includes the fact that the party's candidate for chancellor, Martin Schulz, developed a genuine Merkel obsession over time. The primary focus of the center-left party's campaign wasn't its own policy platform, it wasn't a single idea highlighted in an effort to attract the electorate. Rather, it's primary focus was criticism of Merkel's political style, which Schulz labelled an attack on democracy.

In doing so, Schulz echoed an accusation that had been levelled at Merkel in myriad editorials: Through her unwillingness to justify her political decisions, she was depriving the democratic discourse of the oxygen it needed to survive. That, though, is a rather elitist view of politics. Voters weren't particularly bothered by Merkel's lack of interest in political discourse. On the contrary, the one decision that the chancellor sought to explain more than any other was the course she took in the refugee crisis. She went on talk shows and gave long interviews to explain why she made the decisions she made. She finally uttered sentences that stuck in the collective memory, such as "We can do it!" or "That's not my country." But it was exactly in this phase that her popularity began to crater.

Now, elements within the SPD have elevated the doubt as to whether the party should form a coalition under Merkel's leadership into an existential question. It is, of course, difficult to deny that the SPD suffered mightily from its two coalitions with Merkel, the first from 2005 to 2009 and the second from 2013 to today. In the 2005 election, out of which Merkel first emerged as chancellor, the SPD won 34.2 percent of the vote. In the election last September, the party got just 20.5 percent of the vote. If one listens to the powerful youth wing of the SPD party, it seems like a law of nature that support for the SPD plunges when the party is in a so-called "grand coalition" with the CDU.

Once Merkel Is Gone

But politics is not a precise science. It depends heavily on the people involved. In postwar Germany's first grand coalition, which began in 1966, the SPD's Willy Brandt became foreign minister, only to replace Kurt Georg Kiesinger as chancellor three years later. Currently, though, the SPD under the leadership of Martin Schulz is so occupied with its own suffering that it is unable even to see the degree to which Merkel's power has eroded. For decades, the SPD saw itself as a party capable of bearing the immense responsibility of leading Germany. Now, the party is afraid of going into a coalition with a chancellor whose time is clearly drawing to a close. That's deplorable.

The article you are reading originally appeared in German in issue 6/2018 (February 2nd, 2018) of DER SPIEGEL.

A few weeks ago, SPD floor leader Andrea Nahles called on her party to finally stop blaming Merkel for the Social Democratic Party's plight. "According to that logic, all we have to do is wait until Merkel is gone and things with automatically improve," she said. That, though, is a naïve hope, Nahles said. "In the past several years, the SPD has not been successful in formulating a credible framework for a modern and equitable society."

It is a dynamic that exists in many families: Dominant parents are held up as an excuse for one's own failures and as a pretext for remaining stuck in eternal puberty. Even FDP head Christian Lindner -- who, to his credit, managed to lead his once-ruined party back above the 5-percent threshold for representation in parliament -- has succumbed to a strange regression. The FDP now seems content to sullenly criticize Merkel in lieu of presenting any larger vision.

Many men, both inside and outside of the CDU, have a neurotic relationship with Merkel. Even the nickname "Mutti," or "Mommy," which began making the rounds in the CDU shortly after her tenure in the Chancellery began, contains a strange mixture of derision and subservience. In many interviews during the campaign, Martin Schulz complained about how difficult it was for a male challenger to go on the attack against Merkel. It was a sentiment that fit perfectly with the whiny tone of his campaign.

Three men have now tried to wrest the Chancellery from Merkel, and all of them have ultimately failed due to their inability to explain what they could do better. They all seemed a bit like boys who still live at home and who are happy that Mutti takes care of everything for them. The SPD could now sit back and wait for Merkel to step aside. But perhaps the party should try a different approach. Perhaps its time for the SPD to learn to stand on its own two feet and begin thinking about where the country should go once Merkel is gone. 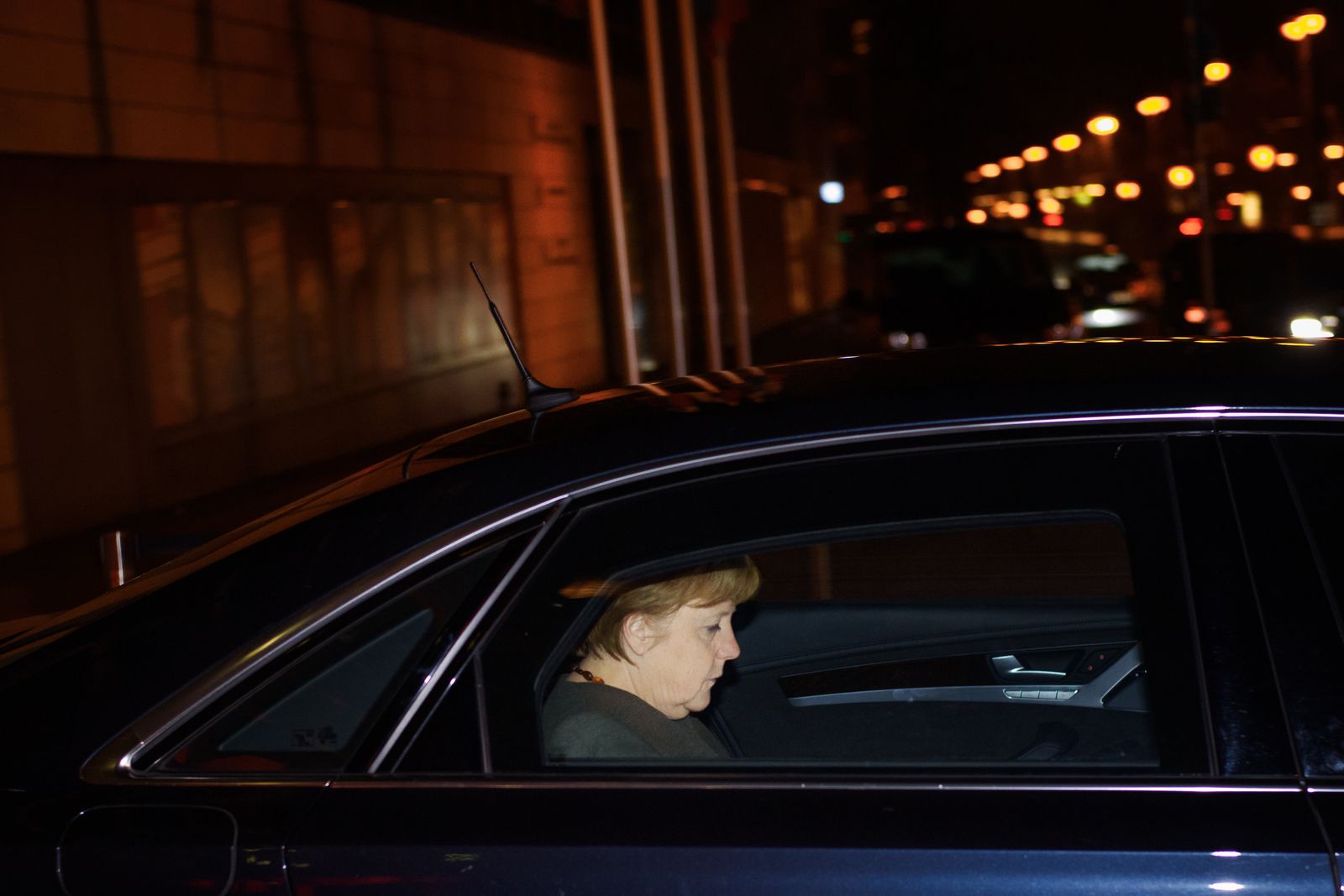