Shooman, 40, is a racism expert and the scientific director of the German Center for Integration and Migration Research (DeZIM). She is also a historian and was previously the director of academy programs at the Jewish Museum Berlin.

DER SPIEGEL: Ms. Shooman, in the U.S. there is a completely different dimension of racist police violence than in Germany. Nevertheless, after the violent death of the African-American George Floyd, tens of thousands of people took to the streets in Berlin, Munich and Hamburg. How do you explain this?

Shooman: People in the U.S. aren't only protesting police violence. It's about much more than that. Black people are disproportionately affected by poverty. They have worse health care and less access to education. These are structural problems, which we also have in Germany. Here, too, certain population groups have a higher risk of becoming impoverished or dropping out of school.

Shooman: One example is racial profiling by police, meaning certain people are subject to more frequent controls without probable cause due to phenotypic characteristics, such as skin color. Studies also show that teachers systematically grade children worse if their names do not sound German. This isn't necessarily because they assume pupils with, for example, Turkish names are less intelligent. It's based on the automatic assumption that they come from an educationally disadvantaged milieu. It's a confluence of multiple discrimination characteristics, like ethnic origin and class.

DER SPIEGEL: Can these teachers be accused of racism?

Shooman: It is a common misunderstanding, especially in Germany, that it can only be racism if it was intentional. However, racism should not only be seen as a problem of individuals with vile intentions. Attention must also be paid to structures and institutional routines in which people may be disadvantaged without deliberate malice.

DER SPIEGEL: Where does this misunderstanding come from?

Shooman: In Germany, racism and anti-Semitism were considered historical phenomena for far too long. Many people believed that by coming to terms with the crimes of National Socialism, we had overcome them. In this view, racism is a phenomenon that only exists among right-wing extremists.

DER SPIEGEL: After the xenophobic arson attacks in Solingen and Mölln in the 1990s, a debate unfolded in Germany about hostility toward foreigners in everyday life.

Shooman: That is true. But people's attention quickly faded. By the way, this would be an interesting time to talk about terminology.

DER SPIEGEL: In what way?

DER SPIEGEL: And that's why people in Germany avoid the term "racism"?

Shooman: Exactly. But just because there is no longer talk of "races," that doesn't mean racism has disappeared. It's only the forms of expression that have changed. Nowadays, arguments aren't so much based on biological race theories but on ethnic, cultural or even religious affiliation. The purpose, however, is still to exclude groups deemed "foreign" from access to material and symbolic resources as well as to legitimize the privileged status of one's own group.

DER SPIEGEL: Who is affected by racism in Germany?

Shooman: I would say that there are five particularly vulnerable groups at the moment: Black people, Sinti and Roma, Muslims, and, thanks to the coronavirus, anti-Asian racism is becoming more relevant, though it should not be forgotten that this group has been the target of racist violence in the past. Think of the 1992 riots in Rostock-Lichtenhagen, for instance. I would also count Jews as a vulnerable group, but anti-Semitism cannot easily be subsumed under the general term "racism."

Shooman: Anti-Semitism is different. It is much more influenced by conspiracy theories. While racism is about portraying others as inferior, anti-Semitism is about things like the Jews' alleged goal of world domination. It is, therefore, more a question of this minority's supposedly terrifying superiority rather than its inferiority.

DER SPIEGEL: How serious is anti-Muslim racism in Germany?

Shooman: Representative opinion surveys and analyses of political and media discourse show that it is one of the most widely accepted forms of racism in Germany. It's comparable to racism against Sinti and Roma. Right-wing populists express it most blatantly, but it has long since seeped into the middle of society. There are countless examples of attacks on mosques and of anti-Muslim violence. So far, however, the phenomenon has not received the attention it deserves.

DER SPIEGEL: Do you also see positive developments in how Germans deal with racism?

Shooman: I do. It's becoming easier to address these problems. Positive examples include the newly formed cabinet committee on racism and right-wing extremism, which shows that the issue is finally being addressed at the highest political level. We need a long-term strategy here.

DER SPIEGEL: What should people watch out for in order to express themselves without being discriminatory? Many people feel insecure about this.

Shooman: As a rule, it's important that we think about when language can be hurtful or exclusionary. For example, when Roma and Sinti say, "Please don't refer to us anymore with the stigmatizing g-word," it's hard to understand why so many people still waste so much energy insisting on using terms like "gypsy sauce" instead of just respecting their wishes. 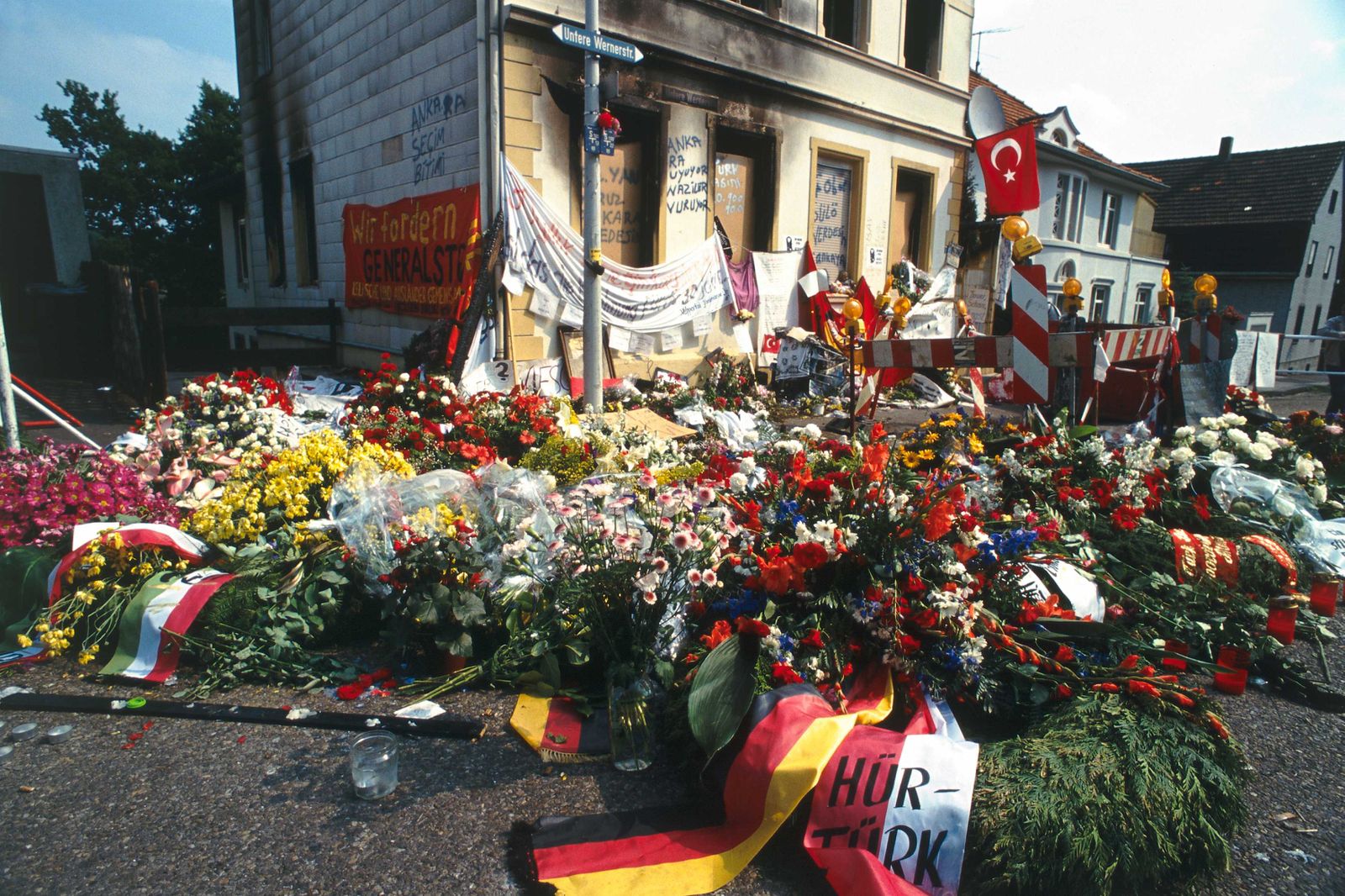 The scene of a racist attack against a Turkish family in Solingen, Germany, in 1993.