Seven or eight months ago, Germany was a different country than it is today. There were no controversial political issues demanding immediate action and Chancellor Angela Merkel's leadership was uncontested. It was quiet and comfortable. But then the refugees began streaming into Europe and the country's sleepy tranquility came to a sudden end. Since then, disgusting eruptions of xenophobia have come in quick succession, a right-wing populist party is on its way to holding seats in several state parliaments, Merkel has gained approval from the center-left Social Democrats and from the Greens, some conservatives want to throw her out and the state is overwhelmed. Does anyone know what is happening? What is wrong with this country?

For Germany, this is the second democratic republic, if one leaves out East Germany, since it was only a faux democracy. First came the Weimar Republic, from 1918 to 1933, and then, since 1949, the Federal Republic, which simply continued following the momentous events of 1989. But now, it looks as though the refugee crisis has brought a significant rupture. To be sure, the German constitution and the country's institutions won't be called into question any time soon. But the conventions governing Germany's political interactions are changing with incredible speed.

A crisis of representation is necessarily accompanied by jolts to the political party system. Some of those jolts have been a long time in the making, but they are now becoming apparent as the refugee crisis takes hold. It could be that our country is currently experiencing lasting change. The contours of a Third Republic are becoming apparent.

In modern democracies, politics takes place in a space of dual representation. Politicians represent their voters in parliaments and governments, while in between elections the electorate can exert influence on the public debate, primarily through representation in the media. Tabloids such as Bild operate as the "voice of the people," while outlets like Die Zeit speak for intellectuals. In truth, though, it is two elites speaking with each other: politicians and journalists. They almost seem like members of the same caste, which would be a problematic state of affairs because it is the media's job to keep a critical eye on the politicians.

The Internet has broken apart this intimate twosome. Now, anyone can join the discussion. That in itself is a good thing, but in the refugee crisis, the debate has spun out of control. One of the roles long played by journalists is that of gatekeeper, largely filtering out the hate, conspiracy theories and other lunacy. That allowed for a more temperate, constructive debate. Despite at times passionate disagreement, politicians and journalists were able to find common ground and make compromise possible. Germany worked.

The crisis of representation is particularly intense in eastern Germany. Prior to 1989, East Germans were led to believe that the Communist Party completely represented the will of the people. The claim was easy to see through, but difficult to confront -- until East Germans ultimately got rid of their state. But when the revolution was over, those who had risen up as one, found themselves once again represented by others. The refugee crisis has revealed the lack of acceptance that many in eastern Germany have for the federal republic system. They don't trust the politicians and take action themselves, in the form of protests. They don't trust the journalists and believe in their own truths. All of that exists in western Germany as well, but it's not as pronounced.

The two main pillars of political representation in Germany have long been the Christian Democrats (CDU) (along with their Bavarian sister party, the Christian Social Union, CSU) on the one hand, and the Social Democrats (SPD) on the other. For decades, these two parties were able to represent the various positions on the right and left side of the political spectrum, respectively. They did so in a media landscape that was likewise divided to the left and right, with each camp serving a like-minded public. Because the two milieus have begun to fragment in recent years, Germany's two largest parties have begun to shrink. The result has been more parties to choose from. But people are also leaving their milieus to become individual actors. And individuals no longer necessarily need a representative, because they can represent themselves. Their stage is the Internet.

Then along came Angela Merkel. Quite some time ago, she managed to transform the CDU into a green-liberal-social democratic amalgam, having largely exorcised conservatism from the party. Her unique brand of politics can in part be explained by the fact that she isn't as wed to her party's traditions to the degree that others -- those who spent their youths defending their conservative worldviews against the left-leaning high school mainstream -- might be. When the refugees began flowing in, Merkel stirred things up for good.

In shaping her refugee policies, Merkel followed the tenets of humanism and internationalism, both of which are rooted in Christianity but whose political home had thus far been on the left side of the political spectrum. In the campaign ahead of elections this Sunday in Baden-Württemberg, this state of affairs has produced an odd phenomenon: Governor Winfried Kretschmann, of the Green Party, is a passionate adherent of Merkel's policy course in the refugee crisis while Guido Wolf, the lead candidate from Merkel's own CDU, has distanced himself from the chancellor. Voting used to be easier. Particularly now that Merkel appears to be distancing herself from herself and is pursuing more restrictive refugee policies. What is one voting for now when one votes for the CDU?

This is, of course, far from the first time that state politicians have run a campaign in opposition to the federal government. It also isn't the first time that the leaders of the CDU and CSU, despite being paired in a decades-long conservative alliance, have battled it out in public as Merkel and Bavarian Governor Horst Seehofer are doing today. Back in the 1980s, there was little lost love between Chancellor Helmut Kohl and Bavarian Governor Franz Josef Strauss. But Strauss and Kohl were in agreement on the fundamental questions facing their era: nuclear power and defense. By contrast, Merkel and Seehofer are so divided by refugee policy that the CSU is considering challenging Merkel's refugee policies at the Constitutional Court.

It used to be that the two conservative parties at least had a common enemy, and when it came to attacking the Social Democrats, the CDU and CSU were happy to put their differences behind them. But what do the Social Democrats stand for today? Who do they represent? SPD head Sigmar Gabriel, after all, recently said that the state has to do more for Germans, a position that would find broad agreement among supporters of the right-wing populist Alternative for Germany (AfD). Germany's party landscape has been stood on its head.

Insurance Against the Fringes

Because Merkel has abandoned those on the right wing of the CDU, the AfD has filled the void and has been boosted by the refugee crisis. That, in turn, could spell the end to the CDU's firm grip on the conservative half of Germany's political spectrum. It is a development long since seen on the left, with support for the SPD having stagnated in recent years at around 25 percent or lower.

It used to be that the CDU and the SPD dominated the political landscape. Referred to as "Volksparteien," or "people's parties," they consistently divided up 80 percent of the vote between them and their sheer size served as insurance against the fringes. They were guarantors of consensus and compromise. The business-friendly Free Democrats (FDP) and the environment-oriented Greens were well-meaning additions to the landscape and were easily integrated.

But SPD missteps and the emergence of the far-left Left Party in 2007 fragmented the left half of the spectrum. The AfD is in the process of doing the same now to the right. Other parties on the extremist right wing, of course, have managed to find their way into some state parliaments, but their successes were largely the product of protest votes. They never really had their own electorates to speak of. The AfD, though, does and has profited from the Internet, transforming itself into the voice of online xenophobic trends and channels. Should the party's success prove lasting, Germany will end up with a political spectrum that is closer to the European norm -- but one which is nonetheless uncomfortable given the country's history.

Ahead of Sunday's state election in Baden-Württemberg, pundits are speculating about the creation of a "Germany Coalition," a coalition that would bring together the CDU, SPD and FPD, whose party colors are those of the German flag. It is reminiscent of the "Weimar Coalition" between the wars, that alliance of center-left parties that was forged to defend democracy, but which proved no match for the dark forces on the fringe. Things aren't nearly that bad yet, of course, but the system feels more instable than it has in a long time.

On the whole, it seems as though the republic is changing form. It is a slow, largely organic change -- and one strongly influenced by eastern Germany. Is that good or bad?

It would, of course, be possible to reestablish the kind of dualism seen in the heyday of the CDU and SPD -- via the introduction of a majoritarian system. That would have the advantage of making it easier to form governments, but in a situation like today, many voters would feel as though they were being shut out. That's not an option. Which is why we have to get used to a more varied party system. The disadvantage is that it will become more difficult for future governments to find consensus. The advantage, though, is that no party will be able to impose its own ideology -- pragmatism is the only route to consensus. And the shrunken Volksparteien will have to release their grip on the state and public broadcasters because they no longer represent the country the way they once did.

The United States these days is putting another possible outcome of the crisis of representation on display. Republican presidential candidate Donald Trump is dependent neither on his party's establishment nor on the established media. He is creating his own electorate with the help of the Internet. That is the path of extremely direct democracy.

It isn't difficult to see the black dystopia that may result: Anger, fear, unchallenged claims to truth and conspiracy theories create a mood that elevates those politicians who are best able to manipulate that mood, in part because he or she helped create it. Identity replaces representation, just like in a dictatorship. All checks and balances -- including the party system and the media -- fall away. Democracy falls prey to emotion.

Germany is still far away from such a fate. But the first steps have been taken. 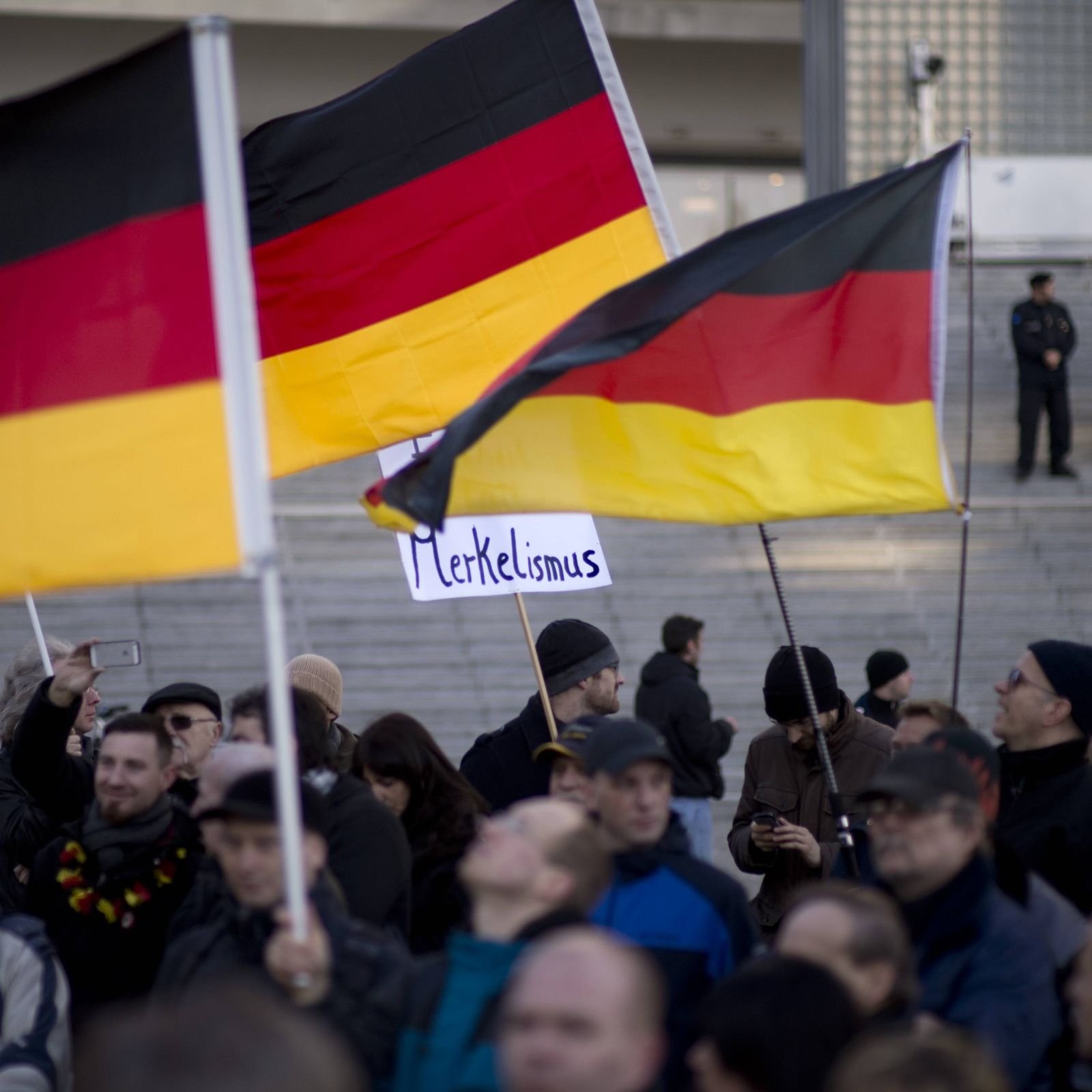