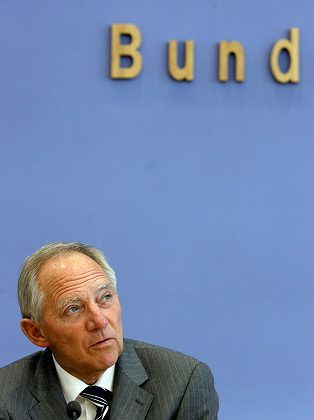 German federal and state interior ministers gathered for an emergency summit in Berlin on Friday to discuss the security situation after a bomb plot was thwarted Tuesday. The arrest of three Islamists suspected of planning terror attacks in Germany has strengthened the hand of many conservative politicians who want the state to be given more powers to detect would-be terrorists.

Interior Minister Wolfgang Schaüble has been pushing for increased online surveillance, including the use of "Trojan" software sent by e-mail to secretly search terror suspects' hard drives. Also on the agenda was the possible criminalization of visits to terrorist training camps.

The ministers agreed that something had to be done about people who train at terror camps, but they were not ready to define exactly how to go about criminalizing these activities. The politicians were unable to overcome their differences on the controversial plans for online surveillance.

Opponents to increasing the state's armoury against terrorism, including many among the ranks of the Social Democrats (SPD), had argued that Tuesday's arrests of three Islamic radicals prove that the current laws are tough enough. Dieter Wiefelspütz, the domestic security spokesman for the SPD, pointed to the results achieved using existing rules. "Highly dangerous suspected terrorists were observed for months with the normal tools" he told reporters Friday.

But not all SPD politicians are averse to toughening up Germany's anti-terror laws. Berlin Interior Minister Ehrhart Körting told the Tagesspiegel on Friday that he thought online surveillance of communications, such as e-mails, was "possible and necessary" -- but that data on hard-drives should still be taboo. And the SPD floor leader Peter Struck said that the party was not rejecting online surveillance out of hand. It just wanted to make sure that the legal and technical issues were clarified, and to avoid giving Schaüble a "blank check."

But German police officers have said that they dont need new laws to fight terror, but more manpower. Konrad Freiburg, the head of the GdP police union, told mass-circulation Bild that the six-month surveillance operation was carried out by 300 officers from various departments and agencies, and across a number of states. "Entire investigation units were paralyzed," he says. "And that was just one case! There are between 60 and 80 instigators in Germany. If we want to prevent future attacks, we need a lot more police officers, not more laws. We have 10,000 fewer police officers today than we had in 2001."

The head of the BDK police union Klaus Jansen told the Neue Osnabrücker Zeitung, that Germany was lagging behind other countries that have updated their laws to meet the real terror threat. He said that the interior ministers summit on Friday should make an honest appraisal of "the security structure that is full of holes."

Jansen said that Islamist terrorism has developed to such a huge extent that the authorities could barely keep up under current conditions. "The political haggling has blocked the anti-terror powers promised to the Federal Criminal Police Office (BKA)."

Meanwhile Germans have been shocked to discover that two of the three men arrested on Tuesday -- Fritz G. and Daniel S. -- are German converts to Islam, dubbed "homegrown terrorists." The other suspect, Adem Y. is Turkish. Prosecutors said the three had undergone training at camps in Pakistan run by the Islamic Jihad Union (IJU) and had formed a German cell back home.

Fritz G.'s last known place of residence was in Ulm, which is viewed by German authorities as something of a hotbed of Islamist radicalism. Dozens of people from Ulm and the neighboring town of Neu-Ulm have been deported and an Islamic center there was closed down by local authorities.

Wolfgang Bosbach, the deputy floor leader of the Christian Democrats, thinks that Germany needs to keep a closer eye on converts like Fritz G. He told the Ruhr Nachrichten that German converts to Islam seek out contact with violent and fanatic Islamist groups. This means "the attackers are from the midst of society." Bosbach said he thought the monitoring of converts should be considered.

But the Protestant Bishop of Hannover, Margot Kässmann, warned against overreacting. "We shouldnt lapse into hysteria" she told the Hessische-Niedersäschsische Allgemeine. Those who demand that converts should be watched should consider the consequences, she said. "We criticize Muslim states like Indonesia and Turkey for the fact that there is no freedom to convert and that people are persecuted, and have to fear for their lives if they convert to Christianity," she said. "That is why I think that religious freedom also means that conversion shouldnt immediately be seen as suspicious, as much as I understand the fears."