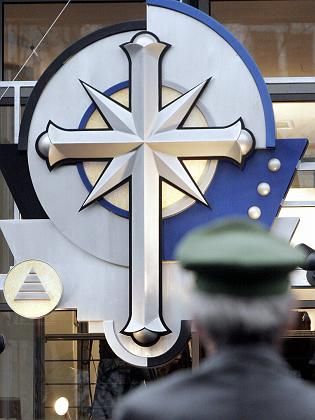 Germany's interior ministers announced on Friday that they considered Scientology to be unconstitutional and said they would seek to ban the organization.

Berlin Interior Minister Ehrhart Körting told reporters that the interior ministers of Germany's 16 federal states and the federal Interior Minister Wolfgang Schäuble "consider Scientology to be an organization that is not compatible with the constitution." The ministers, who are meeting for a two-day conference in Berlin, now plan to charge the country's domestic intelligence agency, the Federal Office for the Protection of the Constitution, with preparing a dossier to pave the way for a possible ban next year.

The agency has had the organization under observation for over a decade. Germany does not consider Scientology to be a religion but a money-making cult.

Scientologists counter that the state surveillance is an abuse of their right to freedom of religion. The group, which opened a six-story headquarters in the heart of Berlin in January, has intensified its efforts to attract members in Germany in recent years.

On Thursday the interior ministers discussed tackling the far-right National Democratic Party (NPD) by possibly cutting off public funding for organizations linked to the party. Attempts to ban the NPD altogether have so far failed.