Nine black limousines glide into a park along the Yangtze River. They're an hour late, as is the privilege of the truly important. The hostesses, wearing dresses slit down the side, smile and whisper "Welcome" as bodyguards open car doors. China's great friend has finally arrived.

Wuhan, a city of 9 million in central China, has gone all out to welcome former German Chancellor Gerhard Schröder, 65, almost as if he were still in office. On this Saturday in late October, Schröder has come to the city to open the "German-Chinese Promenade," a sort of traveling circus with which German companies, artists and experts have been making the rounds of Chinese cities over the past two years, in the hopes of strengthening ties with the emerging economic giant. By day, they talk about "sustainable urbanization" in seminars. By night, they perform music -- from accordion to electronica to heavy metal -- in local parks.

On this evening, standing near a shiny statue featuring a red-and-gold image of Chairman Mao, Schröder delivers a speech before 3,000 people. Ever the statesman, he praises the Chinese for their "magnificent, 5,000-year-old civilization." The Chinese people, he says, can be proud of what they have achieved in the 60 years since the founding of the People's Republic.

Schröder's audience apparently finds his words very inspiring. In fact, a few girls in the front row even start screaming, as if the gentleman from faraway Germany were some Cantonese pop star with narrow hips and gelled-back hair.

For the German organizers, Schröder was actually an emergency stand-in. Chinese protocol demands that there has to be either a celebrity or someone with a high-ranking title for a provincial governor to bless such an event with his presence. But, owing to the coalition negotiations that were taking place in Berlin at the time, there were no German cabinet ministers or state governors who could attend. So the organizers turned to Schröder. And he accepted -- as always.

Schröder, an old China hand, knows the country well. The Chinese call him an "old friend of the Chinese people," a title reserved for very few foreign politicians. Schröder first won over the hearts of Communist Party leaders after NATO jets had mistakenly bombed the Chinese Embassy in Belgrade in 1999: He was the first Western politician to travel to Beijing and apologize for the incident.

Later, he visited China more often than other European heads of state. The Chinese liked that -- particularly because, during his visits, Schröder never made too much of a fuss about human rights. Instead, he argued that the European Union ought to lift its arms embargo against China.

After he was voted out of office in 2005, Schröder started working in private industry. He accepted a position at Nord Stream, a company that plans to build a German-Russian pipeline under the Baltic Sea, and he is also an adviser to the Switzerland-based Ringier media group.

In March 2006, Schröder introduced Michael Ringier, the group's chairman, to Li Changchun, the politburo member responsible for propaganda (and, by extension, publishing). Schröder, with Ringier in tow, was able to practically march unobstructed into Li's office. Since then, the two have made several trips to China together.

In Wuhan, an affable, balding, white-haired man from Germany's Black Forest region is standing among the dignitaries. Martin Herrenknecht, 67, is the CEO of Herrenknecht, a German company that has been digging subway tunnels with giant boring machines in Chinese cities over the last few years. "Schröder is a great guy," Herrenknecht says. "He's ideal for small and medium-sized business owners like me, and he has good connections. I guess it pays to visit China more often." The last remark is a small dig at the current chancellor, Angela Merkel. Ever since she met with the Dalai Lama in Germany, she and the Chinese have had their difficulties.

Herrenknecht has his own excellent connections -- and he knows how important they are to cultivate in China. For example, he knows that someone who arrives with a former chancellor in tow will be eating shark's fin soup with provincial governors and mayors rather than just lower-level officials. And there is another important aspect of the connections game, Herrenknecht says: "If you're that well-connected, they won't rip you off."

The Man with the Golden Tongue

Schröder refuses to discuss his private business dealings. When asked about them, he gets as touchy as he famously does about claims he dyes his hair. For example, he admonished LobbyControl, an NGO, for reporting that he was an adviser to the China's Ministry of Foreign Affairs.

But that claim was not all wrong. On May 14, 2007, Chinese diplomats had asked Schröder for help in converting their old embassy building in Bonn into a center for traditional Chinese medicine. They even presented "Chancellor Schröder" with a certificate of appointment as an adviser.

"He is here constantly, traveling to cities no one has ever heard of," says a German diplomat in Wuhan, who preferred not to be named. "We keep getting requests to provide personal security details." The embassy then has to ask for permission that the two bodyguards are allowed to bring their weapons.

Since March 2006, the Chinese press has reported on eight visits by Schröder. But he also appears to occasionally visit the country without showing up on any radar. A few days before arriving in Wuhan, for example, he was in Xuzhou, a large city in eastern China, where he dedicated a German-Chinese research center for energy and environmental protection in the mining industry. Then he visited Beijing briefly. From there, he traveled to St. Petersburg, 6,000 kilometers (3,750 miles) away, before ultimately returning to Wuhan via Shanghai.

Schröder is not above paying a visit to an eastern Chinese men's clothing manufacturer -- in return for a generous consulting fee, of course. In November 2007, a textile company in Wenzhou named Fapai hired him to help it figure out how to internationalize its brand.

"That was the most expensive presentation Wenzhou has ever paid for," the Wenzhou Trading Newspaper wrote the next day, calculating that each word that came out of Schröder's mouth cost the company about €100 ($148).

Schröder left Wuhan on Sunday morning, but not before singing the praises of his Chinese host once again at an official symposium in the Renaissance Hotel: "The environmental modernization of the country has begun." Then he boarded Herrenknecht's private yet, a Cessna Citation Model 525A, for a flight to Chengdu, the capital of Sichuan province.

In Chengdu, Herrenknecht is bidding on contracts for new subway lines, and Schröder wants to lend a hand. "We're going to dig in our heels here," Herrenknecht says.

City officials sent a black Mercedes 600 to pick Schröder and Herrenknecht up. Five other limousines, filled with bodyguards and officials, escort them to the Hotel Shangri-La. An elderly man, looking exhausted, has just sat down in an armchair in the lobby. He is wearing a light-colored straw hat decorated with a small feather. Lu Qiutian, a former Chinese ambassador to Germany, was sent here from Beijing to accompany Schröder on his visit.

Schröder has just returned from a luncheon at the Shang Palace restaurant. Lu jumps up from his chair. "Now we will go see the pandas," he shouts. "And, this evening, we will meet the governor of the province and the mayor." Later in the day, Schröder delights his hosts by exclaiming: "Everybody loves pandas!"

The next morning, Herrenknecht is waiting in the lobby for his celebrity benefactor. Schröder's efforts are completely altruistic, the businessman insists: "He asks for nothing. I don't even know why he's doing this for me."

But in the world of drills and gas pipelines, a world familiar to both Herrenknecht and Schröder, people are constantly crossing paths, and Herrenknecht will eventually be able to return the favor. It might even be in Russia, where Schröder has many important friends and Herrenknecht has two subsidiaries.

The Cessna, with the two men on board, takes off for the southern provincial city of Kunming, where Herrenknecht wants to dig more subway tunnels and where, once again, the governor will be there to greet them.

From Kunming, Herrenknecht will travel to Singapore. "A night flight," he says, "on a commercial airliner." Herrenknecht's private jet is already booked -- the German businessman is letting Schröder fly home to Hanover in it. 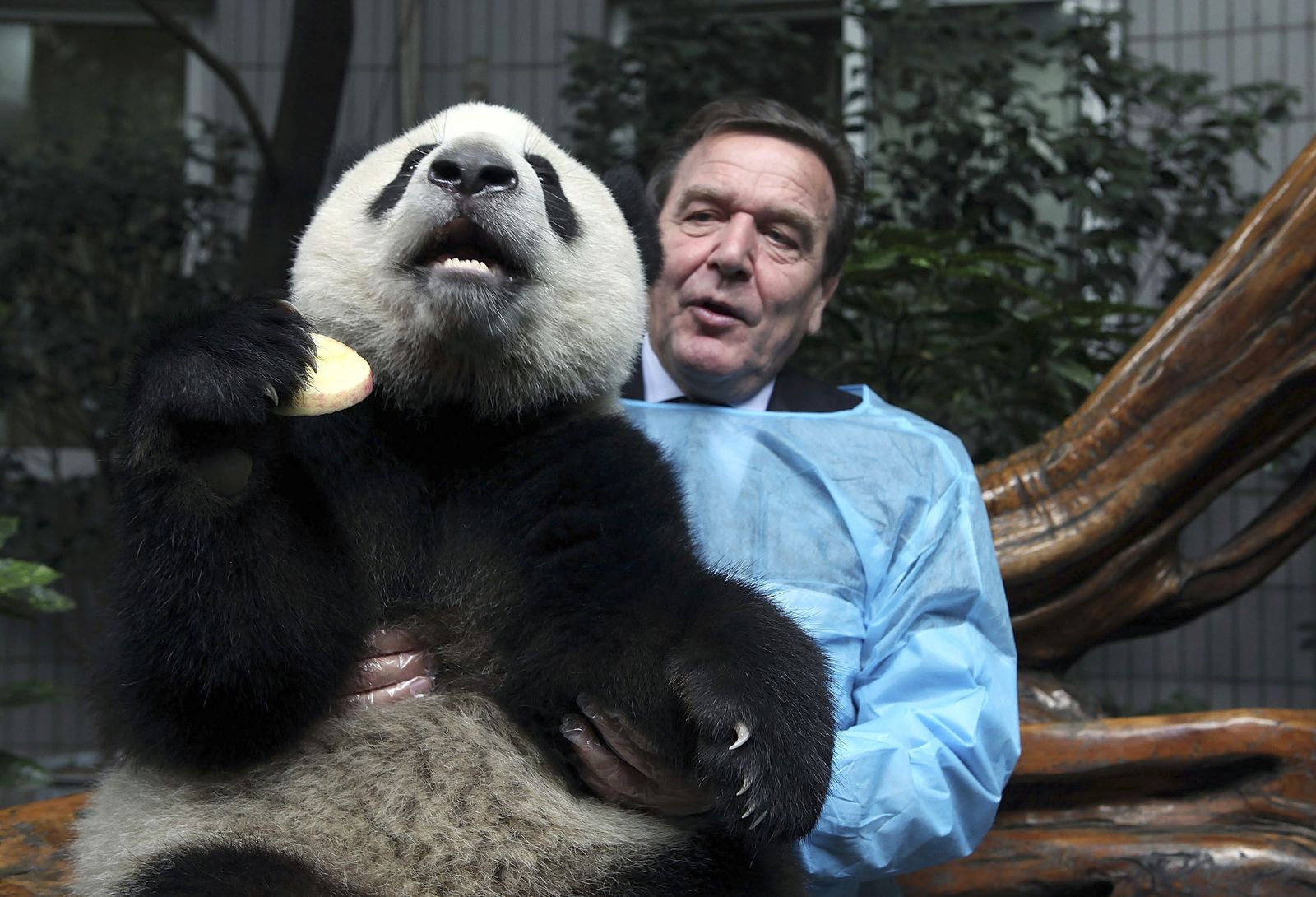