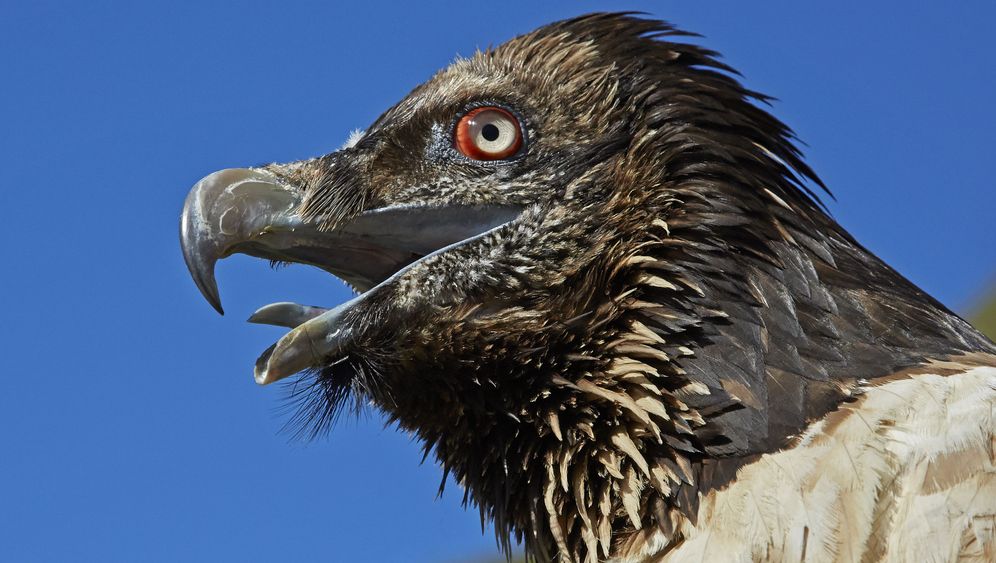 Photo Gallery: Scavengers of the Sky

Griffon vulture number 259 is no longer able to fly. A bullet from a small-caliber rifle wielded by an unknown shooter shattered the ulna and radius of the bird's wing in June. Veterinarians tried to rehabilitate the vulture, using physical therapy to strengthen its wing muscles and even applying leeches to improve circulation, but nothing worked.

"It's over for him," says Wolfgang Rades, director of Herborn, a bird park in the central German state of Hesse. Rades casts a concerned glance toward the vulture, where it crouches on a pile of stones in a corner of its enclosure, looking a sad sight on this cold, damp morning. Yet for Rades, the bird is also a sign of hope. "He's an ambassador for others of his kind living in the wild," the biologist says. "Many more vultures will follow him, if we humans allow them to."

Griffon vulture 259 is among the vanguard of a new avian presence in Germany. Vultures are returning to the country, slipping stealthily into German airspace and often flying at heights of over 1,000 meters (3,300 feet). Ornithologists, glider pilots and hang gliders have all spotted these carrion-feeders above cities such as Hanover and Freiburg and regions such as the Black Forest and the Swabian Jura (see map).

"At least 50 to 60 vultures have been sighted in Germany this year," says Dieter Haas from the Vulture Conservation Initiative (GESI) based in Albstadt, southwestern Germany. "And many more are sure to follow."

Ornithologist counted 26 griffon vultures just in mid-June in the area outside the town of Tessin in northeastern Germany. And from April to August, a bearded vulture named Bernd delighted bird lovers by flying all the way from the Alps to the Baltic Sea. Even cinereous vultures, a rare species with a wingspan of nearly three meters, have been spotted in German skies.

Others may revile these species as supposed harbingers of death, but bird lovers are thrilled. "Vultures provide the best disposal service nature has to offer. They perform an important ecological function," says Haas, who has observed vultures feeding numerous times. They plunge from the sky "like stones" when they spot a carcass on the ground, he says of such spectacles, and set to work on their find. "They gobble everything up and then they're gone again." Haas considers these birds "a gift from the skies."

All four European vulture species -- the bearded, cinereous, griffon and Egyptian vultures -- were once native to Germany, but humans were no fans of the birds.

A century ago, when vultures still lived here, people in the Alps believed bearded vultures stole lambs, goats and even small children. They called the birds "bone crushers," for the way they dropped their prey from great heights onto rocks, smashing the bones to get at the marrow, their favorite food. Local lords offered a bounty for hunting the birds. In 1913, a hail of birdshot tore apart what is presumed to have been the Alps' last bearded vulture, in the Aosta Valley, Italy.

Many griffon vultures, meanwhile, perished from poison bait that was meant for wolves and foxes. Pesticides, too, are harmful to vultures, since they accumulate in the bodies of the animals on which vultures feed.

More than anything, though, vultures disappeared because their once plentiful source of food ran dry -- and remains so to this day. A 2002 EU hygiene regulation, also called the "carcass regulation" by conservationists, stipulates that germs from animal carcasses must be prevented from making contact with drinking water, to keep animal-borne diseases in check. The law was primarily introduced to stem the spread of bovine spongiform encephalopathy (BSE), or mad cow disease, but it also applies when a sheep gets its skull split open by lightning or a deer meets its end at the bumper of a car. No dead livestock may be left lying in the open, and hunters must either take the carcasses with them or quickly bury them.

The new regulation kept European woods tidy -- but there was nothing left for vultures to eat.

Farmers in Spain, for example, had to close down their "muladares," traditional spots where for centuries they had tossed carcasses for vultures to feed on, a hygienic method of disposing of dead animals.

With their food source now gone, hungry vultures began attacking even living livestock. And in 2006, Germany experienced its first influx of vultures, as the emaciated birds flocked in to look for food. Coming as it did in the middle of the summer news slump, the arrival of birds such as a griffon vulture nicknamed "Gonzo" made headlines. German mass-circulation daily Bild reported a "vulture alert in the north."

Three years later, lawmakers eased the "carcass regulation" in response to pressure from conservationists. Spain's muladares are back and the country's vulture population has grown again, to around 25,000 pairs. Biologists have succeeded in reintroducing vultures into the French Alps as well. "It's fantastic, they've seen griffon vultures and steinbock on the same crags out there," Haas says enthusiastically.

It's no surprise, then, that the carrion-feeders have struck out for Germany as well. Young vultures are true distance travelers, undertaking wide-ranging exploratory flights before they start to breed between four and six years of age.

Such was the case with one early adopter, the bearded vulture Bernd -- so nicknamed, although the bird later turned out to be female. In 2012, Bernd was fitted with a radio transmitter and released into the wild in Switzerland. This year, on May 17, Bernd began a journey northward.

Bernd flew first over Bavaria and the Czech Republic, then as far as Poland's Baltic Sea coast, before turning west. She continued on past the cities of Stade and Bremen, then headed south once again. But then, near the city of Bayreuth, Bernd's radio signal suddenly cut out. Bird lovers feared the vulture had suffered a violent death, but those fears were soon allayed. "The female bearded vulture appears to have managed to get rid of her radio tag," conservationists announced online on June 13. Then on June 19 came the news: "Bernd is alive!" The bird was found, weakened, in the German state of Saxony. She was rehabilitated and returned to the wild in the Alps.

Can Vultures Be Fed?

When caught, Bernd was near death, having found too little food in Germany. It's a common scenario. In June, a griffon vulture was spotted at a landfill outside the city of Vechta in northern Germany. "It sat around there for days and grew visibly weaker," recalls Ludger Frye from the local chapter of Germany's Nature and Biodiversity Conservation Union (NABU).

Frye decided to feed the vulture. "But it was more difficult than I expected," he says. Frye spoke with the landfill operator and with conservation and hunting authorities. He could give the bird game carrion, he was finally told. Frye found a couple pieces of venison "in a carcass bin" and threw them to the vulture. "Then the bird started doing better," he says. Soon, it continued on its way.

Frye is pleased with this success, but not precisely happy with the general situation. "If these animals don't find anything to eat here, we'll never get them back," he says.

It's true that Germany is not yet a vulture paradise. "We're overly concerned with hygiene," says Rades at the bird park in Hesse. He points out, for example, that wildlife hit by cars in Germany still gets cleared away in next to no time. "Why don't hunters just move carrion 100 meters or so into an open field and leave it for the vultures?" the biologist asks. And, he adds, why not re-establish specific locations for feeding these birds?

Haas from the Vulture Conservation Initiative has set up one such spot already. In the Danube River valley outside the town of Sigmaringen, he regularly brings found carrion to a field belonging to a shepherd friend of his. Haas reports that he's seen some vultures circling above the field, but so far none has landed. "They don't quite dare," he says. Next, he wants to try bringing in vultures from zoos -- ones that have had accidents and are no longer able to fly, what Haas calls "crash vultures" -- to provide a "trust-building measure" for the wild birds.

Will offering food to these birds of prey really work? Supplying the birds' flight routes with enough meat would call for a fair number of carcasses. The demand would amount to "one cow per year for each vulture," calculates Haas, who dreams of setting up observation platforms near such feeding sites as a draw for eco-tourists. He imagines an afternoon outing to watch vultures feed would present an almost irresistible attraction. "People could experience something really worthwhile," Haas says.

That idea, though, goes too far even for some bird experts. Lars Lachmann of NABU, the conservationist group, finds it a bit premature to be feeding vultures. "With the current low population numbers, at the moment that would just lead to carcasses lying around everywhere, which people would then blame on conservationists," he says.

Instead, Lachmann wants to restore the birds' habitat. Vultures need rocky outcroppings and open pastures where a sheep might now and then fall dead without immediately being "disposed of according to regulation," Lachmann says. "Then the vultures will come of their own volition." He considers the foothills of the Alps, the Swabian Jura and the Harz Mountains in central Germany all to be "potential griffon vulture country."

What remains to be seen is whether or not the general public will give these strictly protected carrion-feeders a warm welcome. Cases such as that of griffon vulture 259, the bird felled by a rifle bullet, make it seem as though the writing may already be on the wall. Whoever shot the bird was most likely not a hunter, biologist Rades says, but a "gun nut with a small-caliber rifle." It seems ignorance and prejudice may once again seal the fate of vultures in Germany.

A different approach is possible, though. Haas tells the story of 23 griffon vultures that turned up one day in the Lorraine region of France and prepared to spend the night in the woods there. "Right away, someone jumped in and provided them with two dead sheep," he says. The next morning, the same French man "took pictures of the vultures and put a great story up online."