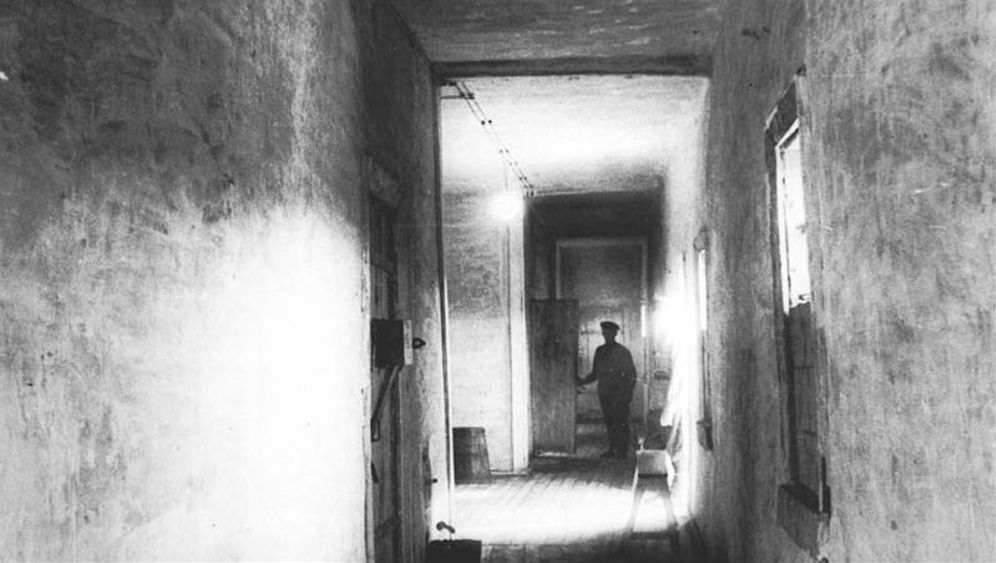 Photo Gallery: The Gulags of the Soviets

Father! When Karl Heinz Vogeley climbs down from the train at 3:30 a.m. clutching his old wooden suitcase, his relatives are there to greet him. He runs toward the man who stands waiting on the platform at the Haldensleben train station -- and only then notices that it isn't his father, but his uncle. His father is standing off to one side, he has grown old. And they haven't seen each other for a long, long time. "Papa," the son asks, "where is mama?"

"Just come on home first," his father replies. But when Karl Heinz asks again, he says "mama isn't with us anymore."

Karl Heinz Vogeley had been away for eight long years, most of which he spent in a Soviet labor camp. Now, at a train station in communist East Germany, he learns that his mother died while he languished as a political prisoner. It is Dec. 28, 1953, Vogeley is 24 years old.

At about the same time, Lothar Scholz, just a few months older than Karl Heinz, is still locked up in Camp 14, some 500 kilometers southeast of Moscow. The convoy which eventually carried Vogeley back home left the camp in June 1953. "The others were called and they were taken away. I was the only one left behind," Scholz recalls. It was several months before he too was released. One day, an officer asked him where he would go if he were released, to East Germany or to the West. Scholz thought it was a trap, but then he blurted: "I don't care! Anywhere where there aren't any communists!"

Between 15 million and 18 million people were imprisoned in Soviet gulags between the mid 1920s and the beginning of the 1950s. Several thousand of them were German exiles who fled to the USSR from Hitler, but tens of thousands of them were prisoners of war as well as opposition activists from the zones of Soviet occupation after World War II came to an end. Some were young when they were sent east, as young as 16 years old, like Lothar and Karl Heinz. They toiled in the copper pits of southern Kazakhstan or in the coal mines of Vorkuta in the far north of the USSR, far away from civilization and even further away from home.

When the Soviet dictator Josef Stalin died in 1953, the German prisoners hoped to be allowed to return home. But for most of them, freedom was not as they had hoped. When they came back, they discovered that life had continued without them and that hardly anyone was interested in hearing about their fate. They were left alone with their traumatic pasts -- in both East Germany and in West Germany.

The compensation offered to the innocent detainees by the West German government was "politically scandalous," says Berlin historian Meinhard Stark today. It amounts to "less than one euro per hour" for hard forced labor, he says. In recent years, Stark has interviewed over 100 former gulag prisoners from around Europe about their time in the camps and their lives since then. He has now published a book about his findings called "Brandmarked: Gulag Prisoners after their Release." Karl Heinz Vogeley is one of those who told his story in the book for the first time.

In the spring of 1945, at the age of 16, he finished school. In February of that year, though, he had already begun military training, part of Adolf Hitler's final hopeless attempt to stave off defeat. Nazi Propaganda Minister Joseph Goebbels had announced Operation Werewolf, a plan for guerrilla commandos to operate behind enemy lines as the Allies advanced across Germany. Karl Heinz's trainers from the Hitler Youth had proclaimed Haldensleben, located just north of Magdeburg, as the "City of Werewolves." The youths painted the operations insignia, a so-called "Wolfsangel" or wolf hook, in red on buildings and shop windows in the town. When the US military arrived on April 13, 1945, Haldensleben surrendered without a fight. They hardly took note of the youths gathered there for training. Soon thereafter, they relinquished the town to the Soviets.

'I Haven't Done Anything Wrong'

The Red Army arrived in Haldensleben on June 1. Twelve days later, Karl Heinz and his friend Helmut received a visitor from the town hall. A woman warned the two that they were to be arrested. But what was there to be afraid of? "I haven't done anything wrong," Karl Heinz told himself. The next day, two men in plain clothes arrived to pick up Helmut. At 6 p.m. that evening, Karl Heinz was arrested as well. "Helmut's mother gave me a sandwich for the road," Vogeley recalls.

Waiting in the hallway at the Soviet headquarters, Vogeley watched as his friend Helmut was taken into the cellar. Soon, he was called in for interrogation. An officer handed him a slip of paper and asked him if he recognized the symbol that was drawn on it. It was a wolfsangel. The interrogation lasted until the next morning. At the end, Karl Heinz was handed a transcript of the interrogation, in Russian. He signed it anyway. Then, he too was taken down into the cellar. In the following days, several more youths from the town were arrested. He recalls confrontations, additional interrogations in the middle of the night, and brutal beatings. Many admit to whatever they were accused of.

The charges from the military tribunal are that Vogeley and the others had carried out terror operations and damaged rail lines and other transportation infrastructure. "We then said that we had made our statements under duress," Vogeley recalls. But the youths remained in custody for several more weeks. One day, Karl Heinz saw his interrogator again in the courtyard of the building where he was being held. Two days later, he sat down with him face to face. "The officer just sat there loading his pistol, forced me against the wall and told me he had never before been accused of having extracted statements under duress."

'Your Verdict Has Arrived'

The verdict came in November 1945: a 15-year jail sentence. Soon after that Vogeley and his comrades were put on a truck which took them to Frankfurt an der Oder, a town on the present-day German border with Poland. From there they were taken east by train in cattle wagons.

At that time Lothar Scholz was living in the town of Fürstenwalde east of Berlin. The local Soviet commander order him to spy for him. But he refused and fled west to Hamburg. He found work in a British military kitchen but he missed his girlfriend so much that he returned on June 1, 1947. He was interrogated for months in a prison in Eberswalde near Berlin. In mid-December 1947 an officer showed him a piece of paper. "Your verdict has arrived from Moscow." Scholz was sentenced to 15 years in a labor camp for allegedly spying for the US. He was put on a train to Moscow and told he was being taken to the Arctic Circle. "I thought it was an adventure and found it exciting," Scholz said. The reality was very different. "We had to hold on to long ropes so that we wouldn't get blown over in the snow storm on the way back to our barracks."

Scholz was brought to one of the camps near the coal mines in the Siberian town of Vorkuta. A few months after his arrival Scholz witnessed how fellow prisoners, former Red Army soldiers, overpowered and killed their guards. In the confusion Scholz managed to find a kitchen knife. "There we sat at night in the tundra, in the snow, back to back. One of us had the knife, the other slept. We swapped every hour. That went on for days." But they didn't manage to escape.

While the uprising was raging in the camp, Karl Heinz Vogeley was lying in hospital. "But I witnessed the results of the uprising." The prisoners categorized as "political" were transferred to special camps: Scholz was sent south to the republic of Moldova, Vogeley to Kazakhstan into a copper mine. There he stayed, toiling and improving his Russian. He no longer believed he would ever make it back home.

In June 1953 he was told a new transport was being prepared. Another new camp? The journey took months and first brought him to Moscow, then westward. On December 22 the train reached Frankfurt an der Oder. Vogeley was issued new clothes by the Red Cross and given his release papers and 50 marks. He arrived back home six days later.

A woman refugee from Silesia in Poland had moved into the family home. She greeted him with a bunch of flowers. "Representative for your Mummy." But apart from their immediate relatives no one showed any interest in the home comers in East Germany. "We were greeted as unceremoniously as we were arrested, without a word, nothing." On the contrary. Vogeley had trouble finding work. No one wanted to hire him with a CV like that.

'I Went Home and Cried'

Eventually an old school friend approached him and invited him home to meet his wife and two-year-old daughter. "He showed me his apartment, his kitchen, his bedroom and then he said: 'This is what I'm most proud of' and pointed to his master craftsman's diploma. I went home and cried and realized that life had passed me by."

It was the same for Lothar Scholz. He was finally released in 1955 and sent to West Germany. When he arrived he registered with the labor office where they told him he would get six months of unemployment benefit based on his last occupation in the Soviet Union. "As I had been cutting down trees at the end I got 28 marks a week." A friend advised him to say he had also sewed uniforms for the Red Army. "That means you had a skilled job," he was told. "You'll get 32 marks a week."

Scholz finally found a job that suited him. He began an apprenticeship as wholesale trader. "I had learned to watch people. With some customers I already knew what they wanted before they even looked at me." He worked himself up step by step until his company put him in charge of distribution for the whole of eastern Germany in the 1990s.

Vogeley also got a job in the trading sector. But his progress was more arduous. He started working as a laborer at a state-owned food wholesaler. After six years of manual labor he was finally allowed to train as a salesman. He ended up as the deputy director of his company.

In May 2010, when Vogeley was invited by the Federal Foundation for Research into the East German Dictatorship to speak at the presentation of Meinhard Stark's book on the Gulag prisoners, he started his speech almost reverentially: "I want to express my gratitude for being given the opportunity for the first time to speak about this in such a forum."

15 Bilder Photo Gallery: The Gulags of the Soviets