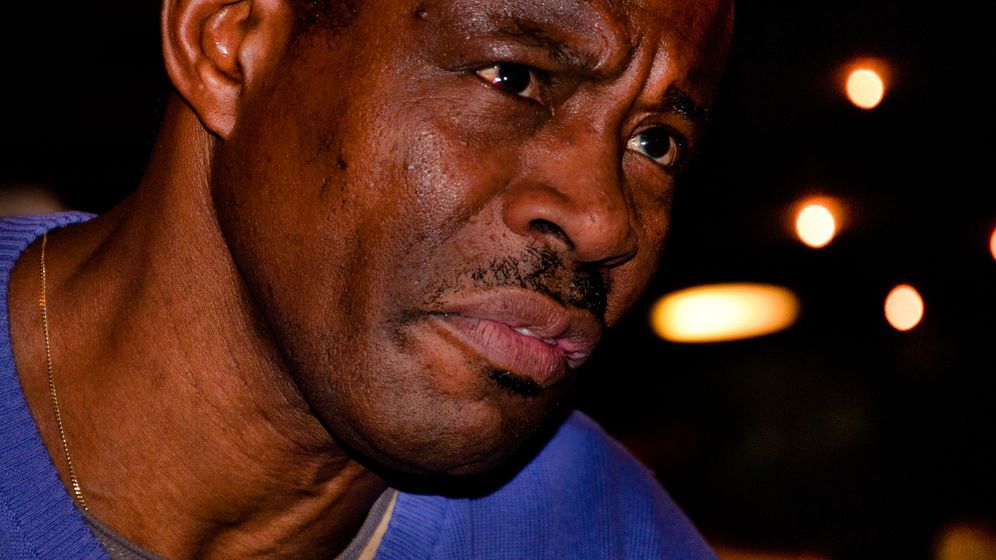 Ibraimo Alberto was nine years old when he thought he was about to die. Walking home through the jungle in Mozambique, he spotted a lion sitting on the narrow path ahead of him. The lion stared at him. The boy's home, a wooden shack, was 500 meters away. The animal stood and walked towards him slowly. Alberto remembered what his grandfather had told him: "Ibraimo, you must never run away when a lion comes, otherwise he will think you're his prey." The lion came up to him and sniffed at him, almost touching him with his snout. Then, with a bound, it disappeared into the night.

He can still feel the racing of his heart whenever he tells that story, says Ibraimo Alberto, clutching his chest. He learned early on not to run away. He is 48 now, and always thought he could cope with any danger life threw at him. That is, until six months ago.

Alberto lived through the Portuguese colonial era in Mozambique and emigrated to communist East Germany when he was 18. In the early 1980s, he worked as a butcher in East Berlin and spent his free time boxing. His love of the sport led him to move to the northeastern town of Schwedt, near the border with Poland, and he boxed more than 100 times for the town. He was so good that he made the national first division. "I was in the newspaper every week," he recalls.

After his boxing career ended, Alberto took a course in social work and volunteered, helping out people in the community. Then the Berlin Wall fell and in the economic upheaval that followed, more than one-third of Schwedt's population moved away. Unemployment rose to 15 percent. As the years passed, a generation grew that knew little about life in the German Democratic Republic (GDR), and they didn't know Ibraimo Alberto. "In the 1990s, the mood against foreigners worsened," he says today.

But he stayed in Schwedt and ended up spending 21 years there, until it became too much and he fled, for the first time in his life. Alberto, the only black person in Schwedt, who was appointed as the town's immigrant representative, fled the racism of his fellow citizens. "Running away," he says today, "was the best decision of my life."

A Symbol of Supposedly Successful Integration

Not everything was bad in Schwedt, but life there hadn't been good enough in the last few years. He always felt accepted in his boxing club and working with young people fulfilled him. People who got to know him were quickly charmed. His eastern German wife's family welcomed him with open arms. But in the end, all that wasn't enough.

Sitting in the back of a café in Karlsruhe, in southwestern Germany, Alberto looks younger than 48. When he talks about the jungle and his grandfather, his eyes light up. But when he talks about Schwedt, his eyes narrow to slits and his fingers drum nervously on the table. His voice becomes louder and harder. "I'm angry at myself for not getting out sooner," he says.

In 2006, Alberto lost his job, but he kept on working for his town, taking part in 104 conferences in his capacity as immigrant representative. He became a symbol of supposedly successful integration in a city in which he himself was being insulted and attacked for being black. He says he filed legal complaints 12 times, but none of his assailants was ever convicted. How can that be? "I think they threw away my complaints as soon as I was out the door," says Alberto. By the time the police arrived with lights flashing and sirens blaring, his attackers were always long gone, he says.

He knew how to defend himself man to man -- a boxer doesn't forget those skills. And he doesn't deny that it gave him satisfaction to strike down people who attacked him. But when a dozen Nazis came running at him, even a tough fighter like Alberto didn't know what to do.

Some people in Schwedt can understand why Alberto fled to western Germany. Frank Bürger, chairman of PoDeSt, a local group that ran a youth center in the city, admits: "People in our group didn't want anything to do with Ibraimo because he's black."

The hate affected Alberto's family. His wife Birgit started suffering from depression and gave up work. Finally, when his children were called "negro swine," Alberto had had enough. He decided to get out as quickly as possible.

After the Escape Came the Anger

When he left, Alberto vented his fury in media interviews where he explained what life is like for a black person living in the eastern state of Brandenburg. Schwedt residents didn't like that. The mayor, Jürgen Polzehl, didn't want to comment on the matter. The mayor's spokeswoman tried hard to find friendly words about Alberto. He was a very nice man, she said. But Schwedt was being unjustly criticized, she added. "The NPD isn't in the town council and we're happy about that," she said, referring to the far-right, anti-immigrant National Democratic Party. Other towns in the region had much bigger problems, she added.

Alberto has been living in Karlsruhe for half a year now. "My wife sometimes gets homesick. But we're all much better off here," he said. He has a job, albeit temporary, but he's earning money. He helps out severely disabled people, drives them to university and goes to the cinema with them.

Some people in Karlsruhe were moved by Alberto's story. "When I read the story about Ibraimo's time in Schwedt I got really angry," said Waltraud Motschall, a local woman who with her husband contacted Alberto and took him and his family under their wings. They go to demonstrations together, and have visited the mayor of Karlsruhe and the local branch of the center-left Social Democratic Party (SPD). "These people are fantastic," said Alberto.

Waltraud Motschall said: "Ibraimo has such a big heart." Sometimes, when they haven't seen each other for a week, he calls them up -- just because he wants to hear their voices.

But in some situations it's clear Alberto is still unaccustomed to the absence of hostility in his new surroundings. As two men approach along a narrow stretch of pavement, he flinches and steps aside, hunching his shoulders and lowering his head, bracing for trouble. But the two men smile at him as they edge past, and Alberto nods back in relief.

A tram departs Karlruhe's market square, and Alberto sprints after it. The driver stops and opens the door to let him in. Two elderly women move their groceries to let him sit next to them, murmuring their apologies in the local dialect. They engage in small talk with him about shopping and the three of them laugh.

Alberto looks out of the window at his new hometown. The women get off and wish him a good evening. "I had no idea that things can be like this in Germany," he says.