German Chancellor Angela Merkel has long been accused of dragging her feet in the euro-zone debt crisis -- and of shying away from the kind of greater European integration that many have been calling for. On Wednesday, however, she sang a different tune.

In a speech before German parliament, part of a general debate on the budget, Merkel made a plea for "more Europe" and said that to make Europe strong and lasting, "treaty amendments can no longer be taboo in order to bind the EU closer together." She also reminded her country that a strong Europe was in Germany's interest. "In the long term, Germany cannot be successful if Europe isn't doing well too."

It was unclear whether Merkel was referring to recent demands by Finance Minister Wolfgang Schäuble for a new treaty which would hand far-reaching fiscal powers to Brussels or to her own 2010 demands for a Lisbon Treaty amendment strengthening deficit rules.

Merkel also said it was time to seriously consider installing a measure which would allow countries who violate European Union deficit rules to be brought before the European Court of Justice, the legal body that settles disputes between EU governments and institutions. It marked a return to her staunch position last summer that those who violate deficit rules must be automatically punished -- a position she ultimately backed away from at the urging of French President Nicolas Sarkozy.

Merkel's speech came amid growing concerns in the European Union that sluggish implementation of austerity measures in Greece and inconsistent focus on exorbitant debt in Italy could put the common currency under yet more pressure. Efforts to prop up the euro, however, cleared an important hurdle on Wednesday morning when the German Constitutional Court ruled that Berlin's contributions to bailout funds were legal. The chancellor welcomed the ruling in her comments to the Bundestag and said it validated her government's approach to the crisis.

Without the Majority She Needs

The next challenge, however, is quickly approaching. On Sept. 29, the Bundestag is voting on reforms to the European Financial Stability Facility (EFSF) and there are several lawmakers within Merkel's center-right coalition who have threatened to stand in the way. A test vote on Monday highlighted the dangers, with 16 parliamentarians voting no and several more abstaining -- enough dissent to possibly force Merkel to rely on votes from the opposition.

Indeed, much of her speech on Wednesday seemed directed at those who would dissent. It is the duty of this generation, she said, not to gamble away the legacy of those who founded the European Union. "It is up to us to secure the future of this success story and to leave an intact Europe to our children and grandchildren," she said. Stabilizing the euro, she continued "is the central task of this legislative session."

"The euro is much, much more than a currency," Merkel said. "The euro is the guarantee of a united Europe. If the euro fails, then Europe fails."

Perceived waffling by Merkel's government as it attempts to come to terms with the euro crisis has cost it significant support in recent months. A new survey released by pollster Forsa on Wednesday found that, were elections held on Sunday, 32 percent of German voters would support Merkel's conservatives and just 4 percent would vote for her coalition partner, the business-friendly Free Democratic Party. A theoretical coalition of the Social Democratic Party (SPD) and the Greens are well ahead, though elections aren't scheduled until 2013.

In Wednesday's debate, SPD floor leader Frank-Walter Steinmeier blasted Merkel saying that her "lack of action" during the euro crisis represents a danger to democracy. He said her government was the worst in decades and that "no government prior to yours has delivered such catastrophic results." 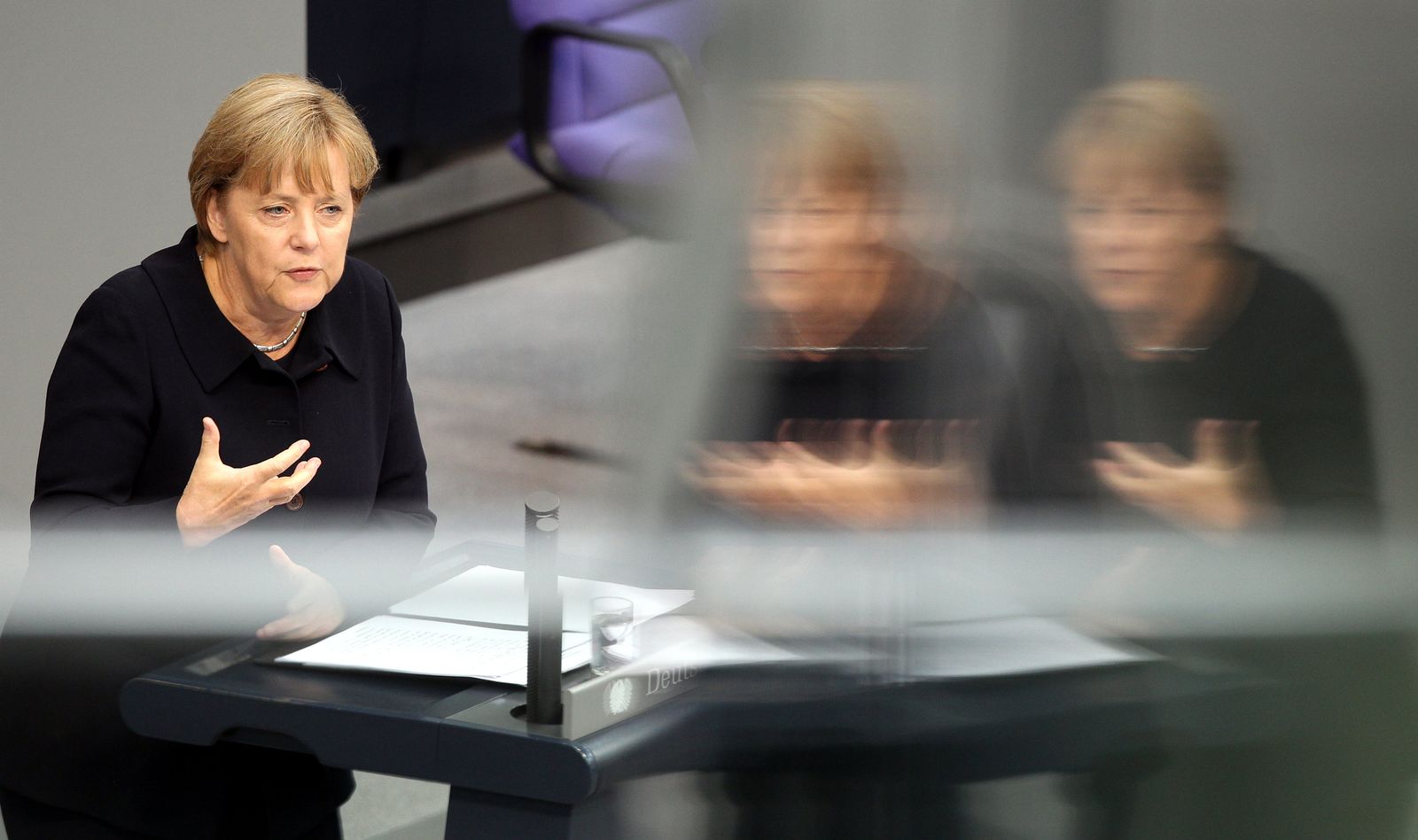 German Chancellor Angela Merkel said that treaty amendments might be needed to bind Europe closer together.