It has become something of a political ritual in Germany to call for the right-extremist National Democratic Party (NPD) to be banned whenever there is an incident of neo-Nazi violence. Berlin, though, has been loathe to touch the issue after Germany's high court threw out a petition to ban the party in 2003, much to the embarrassment of the state. 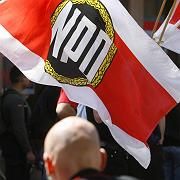 An NPD supporter at a demonstration in Bavaria: The far-right party is in trouble over a leadership struggle and financial problems.

But if the goal is to marginalize the party, the NPD itself may succeed where politics have failed. A steady stream of scandals, including a power struggle within the NPD, a funding crisis and various other debacles, is beginning to look a lot like slow-motion self-destruction.

The latest in-fighting revolves around who will challenge the unpopular party leader Udo Voigt at the upcoming party convention. In a sudden turnaround, candidate Andreas Molau announced Wednesday that he will not run for the position as planned. Instead of Molau, a 40-year-old former Waldorf school teacher who is press spokesman for the party's Mecklenburg-Western Pomeranian branch, Udo Pastörs, the NPD's powerful floor leader in the Mecklenburg-Western Pomeranian state assembly, will now run for the position of party boss.

Molau made a surprise announcement last December that he would challenge Voigt for the position of party leader at the NPD's national party convention at the end of March. Molau was supported in his bid by Pastörs and Holger Apfel, who is NPD floor leader in the Saxony state assembly.

The leadership challenge is due to Voigt's unpopularity among many of the party's members, who accuse him of sharing the blame for a donation scandal in which the party's former national treasurer Erwin Kemna embezzled €740,000. Kemna is now in prison serving an almost three year sentence.

Molau's decision to take on Voigt caused an unprecedented bout of mudslinging to break out in the party's ranks. In an amateurish video interview, the NPD's deputy leader Jürgen Rieger, who belongs to the ultra-right wing of the ultra-right NPD, took pleasure in bad-mouthing Molau. Among other things, he accused Molau of being "one-eighth Jewish."

Molau responded in kind in his statement Wednesday withdrawing his candidacy. He accused Voigt of being a "compliant puppet of the stock market speculator Rieger" and said that Rieger had "spread wild speculation and brazen lies about me" in his "dirty interview." According to Molau, Rieger had accused him of wanting to "get blacks to join the NPD."

Molau also accused Voigt of incompetence in connection with the Kemna affair. A party leader "who doesn't notice that six-figure sums are disappearing from the party's coffers" no longer deserves to lead the party, he said.

"At the moment I can't say if I will stay in the party or not," Molau told SPIEGEL ONLINE. However he said that he was definitely not available for a position in the party under Voigt or Rieger as leader. Molau recently resigned from the party's national committee over party in-fighting.

Voigt called for clarity within the ranks. "The other side should finally make up its mind what it wants and who they want to put forward as a candidate for party leader," he told SPIEGEL ONLINE. In a video interview recently published on the NPD's Web site, Voigt called for an end to squabbling in the party. In the clip, in which Voigt is seen staring reflectively at a river, the NPD boss refers to media reports that the party is in self-destruct mode. In an unintentionally comic scene, Voigt points at the tree behind him and says: "When I see this weeping willow in the background, I regret that we find ourselves in this situation."

Molau's withdrawal effectively weakens the relatively moderate wing of the NPD, which condemns -- at least in public -- neo-Nazi violence. Some observers are already talking of a "schism" within the NPD.

A Series of Embarrassments

The power struggle is the latest in a series of embarrassments for the party. As well as the embezzlement scandal, a functionary from the NPD's Berlin branch recently accused party leaders of attempted blackmail. The woman, identified only as Gesine H., stepped down earlier in February, claiming her superiors had tried to blackmail her with supposedly "pornographic" photographs of her they had found on the Internet. She said her bosses had threatened to make the photos public if she didn't resign.

SPIEGEL also reported Monday that the NPD's finances are in a mess. The party's 2007 accounts, which were submitted to the German parliament a few weeks ago, contain irregularities totaling almost €900,000, sources in the Bundestag told SPIEGEL. If the discrepancies are confirmed, then the party -- which is already heavily in debt -- could face a fine equal to double the amount of the incorrect items, a total of €1.8 million.

Pastörs himself admitted last week that the party's finances are in a sorry state. "The NPD's war chest effectively does not exist any more," he said. As a legally registered political party, the NPD -- which is under observation by Germany's domestic intelligence agency, the Office for the Protection of the Constitution -- receives funding from the federal government.

The various problems are a major hindrance for the NPD given that 2009 is a "super" election year in Germany. In addition to national elections in September, there are state elections still to be held in four states, including Saxony, Thuringia and Brandenburg, which are all in the NPD's power base of the former East German states. The far-right party has seats in the state assemblies in Saxony and Mecklenburg-Western Pomerania and managed to get 9.2 percent of the vote in the last elections in Saxony in 2004.

Despite the NPD's problems, the German far-right scene as a whole is far from being on the ropes. Some 6,000 far-right demonstrators took part in a demonstration on Saturday in Dresden to mark the anniversary of the destruction of the city by Allied warplanes in February 1945 -- almost twice as many as last year. Five anti-Nazi demonstrators were injured during an attack later that same day by right-wing extremists at an autobahn service station. There are reports that violent autonomous neo-Nazi groups in Germany, which have been courted by the NPD in the past, are cutting ties to the party out of exasperation with the in-fighting and scandals.

Additionally, preliminary statistics released by the Interior Ministry Wednesday suggest that far-right crimes in Germany reached a new high in 2008. Police recorded 13,985 extreme right-wing crimes in 2008 -- most of which were related to propaganda offenses, such as displaying banned symbols like the swastika. The total represents a rise of 28 percent over 2007. The number of violent offenses rose from 642 in 2007 to 735 in 2008.

With reporting by Sven Röbel and Philipp Wittrock.