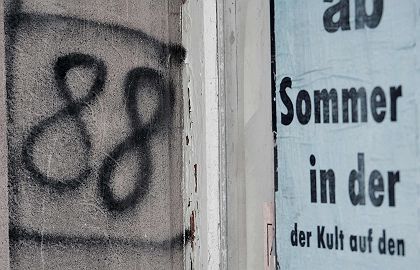 Neo-Nazi graffiti in Mügeln. The numbers 88 stand for HH, which in turn represent "Heil Hitler."

The search for clues continues in Mügeln. Almost five days after eight men from India were chased through the streets of this small town in the Eastern German state of Saxony by a mob shouting "Foreigners Out!" police are still having difficulty piecing together exactly what happened. All of the Indians landed in the hospital, but the town is full of competing stories as to who started the fracas. So far, only two suspects have been arrested.

But while investigators are interviewing anyone they can find in Mügeln, a debate is raging in Germany as to whether the country is doing all it can to fight neo-Nazi violence. The county where Mügeln is located applied for federal funding to help combat right-wing violence, but was turned down this spring. While one local conservative politician is trying to use that rejection as proof that there is no neo-Nazi problem in Mügeln, others are saying that the federal fund to fight extremism simply isnt big enough.

"From the very beginning it was clear that there was only enough money for a limited number of projects," a spokesperson for the Family Ministry, which administers the fund, told the daily Die Tageszeitung. Berlin provides €24 million per year to fight right-wing extremism.

But another reason for the rejection may have been technical, according to the Berliner Zeitung daily. German Chancellor Angela Merkel's administration changed the rules for funding programs aimed at educating people against xenophobic groups. Instead of funding individual projects, the federal government now provides block funding to states. The states themselves are left to determine what projects they fund with that money.

Many, including the Central Council of Jews in Germany, are demanding that responsibility for fighting neo-Nazis in the country be shifted from the Family Ministry to the Interior Ministry. Others are saying the fund needs to be dramatically increased.

Whether such moves would solve the problem is doubtful, however. Leading Christian Democrat Ronald Pofalla said on Thursday that "we don't need more money, rather we need more civil courage" -- in other words, more people who are willing to stand up to stop right-wing extremist thugs when they try to act.

Early on Sunday morning in Mügeln following a town festival, a mob of some 50 Germans chased eight Indians through town. The Indians sought refuge in a pizzeria, but the mob broke down the doors. Some 70 police were needed to quell the violence, but not before all eight of the Indians had been beaten up. Many witnesses reported having seen a group of neo-Nazis marching into the town briefly before the incident. Others accuse the Indians of having started the altercation on the dance floor in one of the festival tents.

Uwe-Karsten Heye, a former government spokesmen who burst into the headlines prior to the 2006 World Cup in Germany by identifying "no-go areas" for foreigners in Eastern Germany, said in a Thursday interview that the education system is partly to blame.

"The roots of right-extremism in Germany seem to partially lie in a school system which has been unable to adequately confront the problem," he said in an interview with the daily Passauer Neuen Presse. "In Germany's east there are unfortunately areas that people with dark skin color should avoid. This sad reality is confirmed almost daily."

Still, it would be difficult to accuse politicians in Berlin of sitting on their hands. There are some 4,500 local and regional projects and initiatives aimed at combating right-wing violence that receive federal funding. Since former Chancellor Gerhard Schröder began a major federal push against neo-Nazis in 2001, the state has pumped some €192 million into such programs.

But has it helped? Saxony Governor Georg Milbradt, of the conservative Christian Democrats, wants to see what else can be done. He announced on Thursday that he is planning a conference against right-wing extremism in November. Representatives from towns and villages throughout the state will be invited to discuss measures that can be taken to combat violence and extremism.