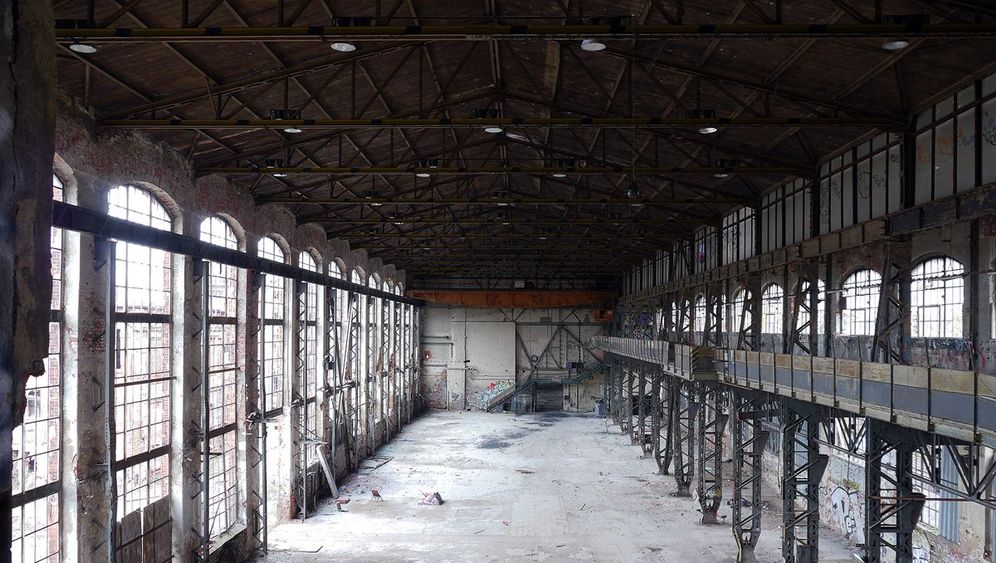 Broken windows, graffiti and weeds -- the former Clara Zetkin rayon factory, in the town of Elsterberg, is now nothing more than an echoing, empty ruin, its bare walls reflected in puddles on the floor. This factory in the state of Saxony was once what was known as a Volkseigener Betrieb (VEB), the term for state-owned industrial enterprises in former communist East Germany. Twenty-five years ago, thousands of workers spun coal and petroleum into thin strands of rayon here under the bright neon lights that made it possible to work around the clock. Now, electrical cables hang from the ceiling like thick cobwebs.

Leipzig-based photographer Maix Mayer has captured this and many other industrial ruins in a book of photography titled "Die vergessenen Orte der Arbeit" ("Forgotten Places of Work"). In the winter of 2012, Mayer spent hours wandering through decommissioned factories and power stations across former East Germany, from Magdeburg to Leipzig to Görlitz. "These VEB sites were sometimes as large as 15 hectares (37 acres), with thousands of employees going in and out -- veritable towns in their own right," the photographer says. He also recalls how his footsteps echoed as he walked through the 150-meter (500-foot) production hall at the Elsterberg factory in December.

The days he spent in these abandoned, unsecured factories, where rainwater froze in puddles on the floor, didn't bother the 53-year-old. He believes architectural photographers have a duty to engage in a process of mourning as part of their work: "Creating something that people can remember," as Mayer puts it.

He let the caretakers of these ruins shut him inside the factory grounds, which are not accessible to the public, until dusk fell. Most of the sites are watched over by former employees, many of whom still feel a deep attachment to the places where they used to work. In the case of the Elsterberg rayon factory, it was Wolfgang Haupt who opened the factory gates for Mayer. The 64-year-old was manager here from 1965 to 2008. Sometimes he still goes to visit the factory site, but says it makes him sad. "This place fills me with melancholy," Haupt says. "I spent my entire working life in these buildings."

From 1909 on, Elsterberg was inextricably linked with the chemical industry. Although the town's industrial equipment was shipped to the Soviet Union in 1948 as war reparations, the factory recovered quickly and, as a publicly owned enterprise under the East German government, grew to be the region's most important employer. "Chemistry brings bread, wealth and beauty" -- every child in this town of 5,000 was familiar with the slogan of the chemistry program run by the country's Socialist Unity Party (SED). Up to 3,000 people worked at the factory here, including at times foreign workers who came from Cuba, Mozambique and Vietnam to keep the constantly whirring machines running. "The spools were always turning," Haupt recalls.

But then came July 1, 1990. On that date, a few months after the celebrated fall of the Berlin Wall, East and West Germany entered into an economic and monetary union, marking the end of the German Democratic Republic's planned economy. At the time, there were around 8,500 publicly owned enterprises in the GDR. Treuhand, the government agency that privatized East German state-owned enterprises, broke these down into 13,000 individual operations, which it then further split into 15,000 private companies.

West German investors, it turned out, weren't interested in East Germany's often inefficient and environmentally questionable factories. Within three months, 150,000 people were out of work, while another half a million were handed reduced working hours. By the time Treuhand wrapped up its work in 1994, some 64 percent of workers in the "new" German federal states -- the ones that had previously comprised the GDR -- had lost their jobs. The "flourishing landscape, where it pays to live and work" that Chancellor Helmut Kohl promised East Germans had failed to materialize.

In Elsterberg, a West German company called ENKA GmbH, based in Wuppertal, took over the rayon factory after reunification and restructured it completely, with modern equipment and optimized operations, rendering much of the labor force redundant. Of the initial 1,200 employees, just 400 remained. "That was very nearly the end of us," Haupt says. Even for those who kept their jobs, everything changed. Day and night, Haupt and his colleagues pored over textbooks that explained the new computer technology, desperately trying to keep up with the fresh demands placed on them. "We found ourselves thrust into a whole new world," he says.

Anger at the Owners

Despite competition from countries with lower wages, textile products from Elsterberg remained in demand -- until the facility suddenly shut down in 2009, despite its full order books. "We were so angry," Haupt recalls. Specifically, the workers were angry at the factory's last owners, the ENKA Group from Wuppertal and the ICI Group from Frankfurt am Main. "They were never concerned with finding a buyer for the factory. Their intention from the start was simply to shut it down," Haupt claims. He believes the owners were only interested in selling off the factory's equipment, which has since been disassembled and rebuilt in Poland and India. Only the expensive environmental protection system, once so important to the factory's works council, wasn't shipped along with the rest of the equipment.

Ultimately, the city bought the abandoned factory from an insolvency administrator for the symbolic price of €1. The buildings on the site have been gradually falling into decline ever since. The city hopes to bring new industry to the site, but Haupt knows the chances are slim. "We aren't even connected to the highway yet," he says.

In 2008, the former factory manager received an assignment from the company's upper management to write up the history of the factory, which would turn 100 years old the following year, but the facility ended up closing before it could celebrate its 100th anniversary. Haupt nonetheless completed his written history. He, too, was engaged in a process of mourning.

The book, "Die vergessenen Orte der Arbeit," or Forgotten Places of Work, was published by Mitteldeutscher Verlag in 2013, and can be purchased at Amazon.