The official investigation into the National Socialist Underground (NSU), the neo-Nazi cell which is believed to have killed at least 10 people over a period of years, has been marked by a series of embarrassing failures and slip-ups by the authorities. But new revelations about the case threaten to trigger a major scandal with possible political consequences.

Politicians from all of Germany's main parties have reacted with anger and incomprehension to revelations that the Office for the Protection of the Constitution, Germany's domestic intelligence agency, destroyed files relating to the case in November 2011 after the NSU activities became public.

Members of the German parliament's investigative committee into the NSU told the media earlier this week that the intelligence agency had destroyed files on an operation to recruit far-right informants on Nov. 12, 2011. On the previous day, it had been revealed that the NSU were apparently responsible for the murder of nine small businessmen of Turkish and Greek origin. The murder series, which took place between 2000 and 2006, had been one of Germany's biggest unsolved crimes.

The case initially came to light on Nov. 4 after cell member Uwe Mundlos shot fellow member Uwe Böhnhardt and himself in a camping vehicle in the town of Eisenach following a botched bank robbery. The third member of the cell, Beate Zschäpe, went on the run but later turned herself in to police. A few days later, investigators found the gun which had been used in the murder series in the cell's burned-out apartment in Zwickau, leading them to make the link to the killings. The trio had been living underground since 1998.

Reacting to the news of the destruction of the files, German Interior Minister Hans-Peter Friedrich promised that the incident would be swiftly cleared up. He said Thursday that he had told the head of the intelligence agency, Heinz Fromm, to "thoroughly investigate this incident and report back to me as soon as possible."

Members of the parliamentary investigative committee reacted to the news with shock and outrage. "Such incidents make it difficult to convincingly refute the conspiracy theories," said committee chairman Sebastian Edathy, a member of the center-left opposition Social Democrats. There has been persistent speculation that the domestic intelligence service may have used members of the NSU as informants.

Other members of the committee were equally scathing. Hartfrid Wolff of the business-friendly Free Democratic Party described the incident as "unbelievable," while Clemens Binninger of the center-right Christian Democratic Union said it created scope "for all kinds of theories." "Clearly the Office for the Protection of the Constitution has a lot to hide," said Petra Pau of the far-left Left Party, which has been particularly critical of the authorities' handling of the case.

On Thursday, officials at the Office for the Protection of the Constitution told SPIEGEL ONLINE that the shredding of the documents was unprecedented. They insisted it was due to the misguided actions of an individual and not the result of an order to destroy the files.

Sources in the intelligence community said that a legal investigation had been opened against an employee of the Office for the Protection of the Constitution. The officer is apparently head of a so-called "procurement" department, which is responsible for running sources and obtaining information from them. The agency's management is "appalled" and "absolutely furious" about the incident, sources said, adding that officials were trying to reconstruct the files as best they could. Apparently seven files were destroyed.

The agency has reconstructed the timeline of the documents' destruction. The department head supposedly received orders on Nov. 10, 2011 to search his files for the names of the three NSU members -- Uwe Böhnhardt, Uwe Mundlos and Beate Zschäpe -- and look for possible connections to the far-right scene. Among other files, the officer looked at documents relating to Operation Rennsteig.

The operation, whose name refers to a famous hiking trail in the state of Thuringia, was intended to recruit informers from a far-right group called the Thüringer Heimatschutz ("Thuringian Homeland Protection") during the period from 1996 to 2003. Böhnhardt, Mundlos and Zschäpe, who all used to live in the Thuringian city of Jena, were also active in the group for a time. Both the Office for the Protection of the Constitution and Germany's military intelligence agency, the Military Counterintelligence Service (MAD), were involved in the operation.

The department head allegedly did not find anything of interest in his files. One day later, on Nov. 11, he informed his superiors that he had not found the names of the three suspected terrorists or other evidence in his records. At the same time, he noted that seven so-called procurement files had been archived for too long. This type of file includes all the details about the recruitment of a source, including their codename and observations about their character. The agency is generally obliged to destroy such files after a maximum period of 10 years. The department head gave orders for the files to be destroyed immediately. A day later, on Nov. 12, another employee carried out the shredding as per instructions.

The behavior of the department head appears odd, however. He told his superior officer in January 2012 that the seven files from Operation Rennsteig had already been destroyed in or around January 2011 because of the time limit on files. Only when Fromm, the agency head, asked follow-up questions did the officer admit that the files had actually been destroyed on Nov. 12, 2011 -- in other words, just as the cell's connection to the murder series was uncovered. At that time, the Federal Prosecutor's Office had taken over the investigation and requested to see all the relevant documents.

According to sources in the intelligence community, Operation Rennsteig was a large-scale attempt to infiltrate the far-right scene around Thüringer Heimatschutz. Intelligent agents initially selected 35 "prospective candidates" as potential sources. Eight of those people were later recruited as informers, with six of them being run by the federal intelligence agency and the others by the state-level intelligence agency in Thuringia. In addition, the Office for the Protection of the Constitution drew up a list of 73 men of "military service age" for the Military Counterintelligence Service. It is unclear what the military intelligence agency wanted to do with the list. But it is perhaps significant that the names of Mundlos and Bönhardt appeared on that list.

The destruction of the files is extremely embarrassing for the authorities, especially as it seems unusual that a department head would have acted alone in such an important case. Sources in the intelligence community said it was completely incomprehensible that files relating to an extremely sensitive case, even if only tangentially, would simply be destroyed.

The so-called evaluation files relating to Operation Rennsteig still exist, sources said, and are currently being reassessed. These files contain raw reports from informants and other information which have been collected and evaluated by agency employees.

The incident is likely to put Fromm, the intelligence agency head, under pressure. He will be asked to appear as a witness in front of the Bundestag investigative committee at one of its next sessions. He is likely to face tough questions about the shredded documents. 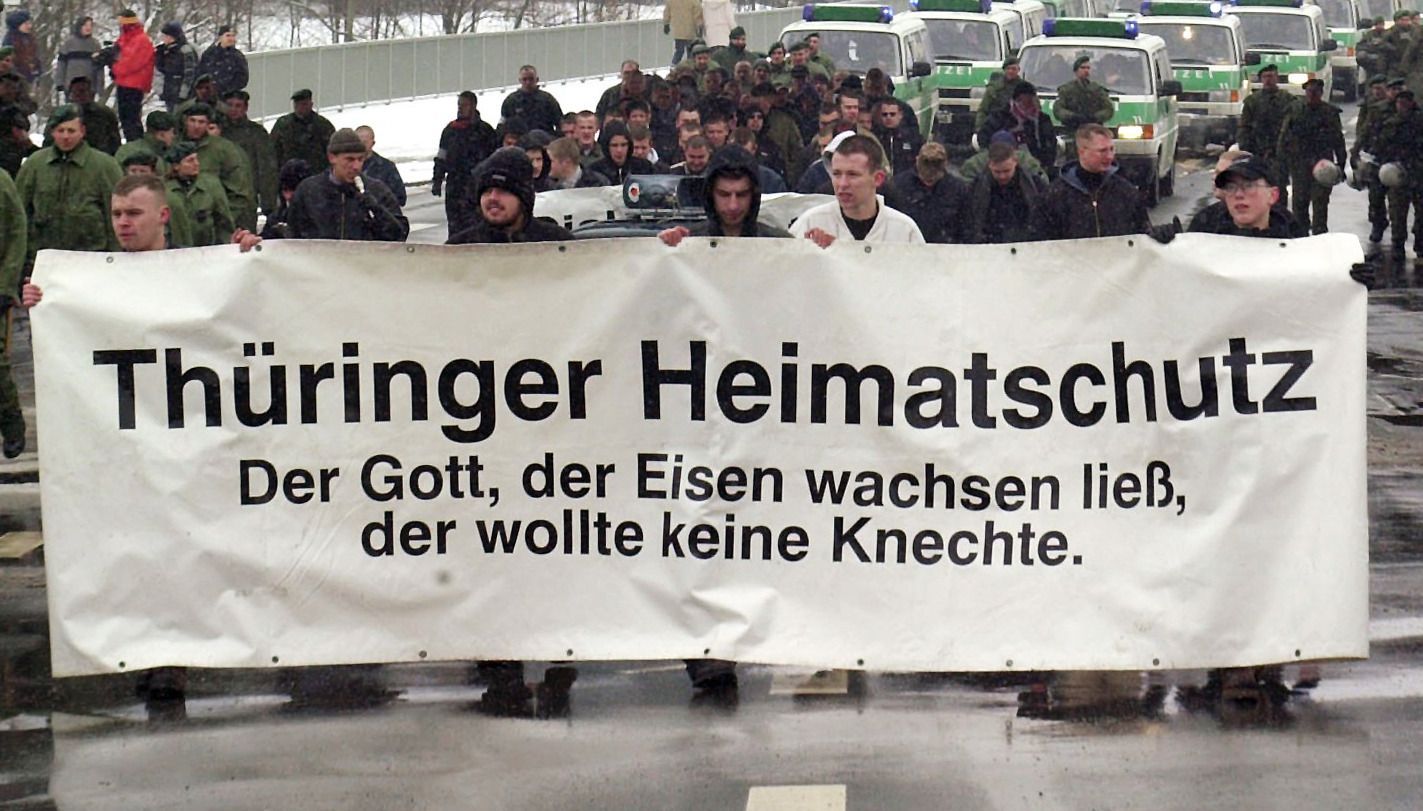 Neo-Nazis carry a banner for the far-right group Thüringer Heimatschutz in a 2001 demonstration in Jena. The files that were destroyed were related to the group.