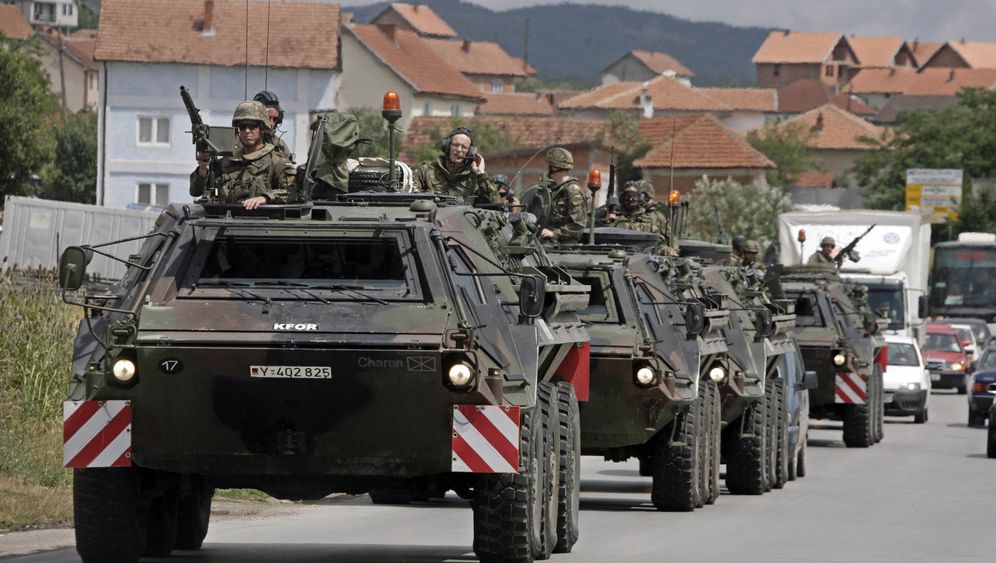 SPIEGEL: Mr. Schröder, German soldiers have participated in more than 20 foreign missions in the last 20 years. Have we become a normal nation?

Schröder: You could look at it that way, although I wouldn't use the term normal in this context. We have been a sovereign nation since reunification, and after a difficult learning process, we are also behaving accordingly.

SPIEGEL: How did your personal learning process go?

Schröder: When the Americans attacked Iraq in 1991 after Saddam Hussein's invasion of Kuwait, I was strictly against German involvement. Like the overwhelming majority of citizens, I was convinced that Germany, in light of its history in the last, bloody century, should not be involved in military campaigns.

SPIEGEL: Did you also have also personal reasons? Your father died in the war, and your generation experienced the immediate postwar period.

Schröder: It had less to do with my father, who I never met. There was simply a consensus in the old Federal Republic that Germany should never take part in another war, except to defend the country.

SPIEGEL: What made you change your mind?

Schröder: It was the realization that a sovereign country cannot hide behind its past in the long run. We were no longer divided, and we no longer had a special status. The international community expected that we do more than help out with money, as we had been doing for a long time.

SPIEGEL: Are you surprised by the speed with which this change in political convictions has taken place?

Schröder: Well, it didn't happen from one day to the next, but gradually. The Federal Constitutional Court reinforced this learning process with its rulings. It began with the decision on the deployment of AWACS aircraft over Bosnia and continued with other rulings. It was clear that the reference to German history was also no longer relevant from a legal standpoint.

SPIEGEL: One of your first foreign policy decisions as chancellor was to participate in the Kosovo war.

Schröder: At the time, the center-left Social Democratic Party (SPD) still distinguished between measures to preserve peace, which were considered good, and measures to create peace, which many rejected. It was obvious that as the governing party, we would not make any headway with this decision. What was happening before our eyes in the Balkans was the threat of genocide. My party had to acknowledge reality and act accordingly.

SPIEGEL: The Kosovo mission was approved by your coalition government, made up of the SPD and Greens. Was that necessary to achieve social consensus?

Schröder: It was helpful, at any rate. It was also thanks to (then Foreign Minister and Green Party leader) Joschka Fischer. The yes vote by the SPD and the Greens allowed us to face reality. It was really a social breakthrough.

SPIEGEL: But things changed a few years later. You forced your coalition to approve the Afghanistan mission with a vote of confidence.

Schröder: The United States was attacked on its own territory on Sept. 11, 2001, which meant that Article 5 of the NATO Treaty applied. There was also a unanimous resolution by the United Nations Security Council. Saying no at that point would have isolated us completely. It would have signified the opposite of normality. And I wanted to show that my coalition government could come up with its own majority for the decision.

SPIEGEL: Do you still think the mission is right?

Schröder: I think it's justified. I still think that today.

SPIEGEL: Why do you hesitate to say that it was also the right thing to do?

Schröder: The decision was not only justified at the time, but it was also the right thing to do. Afghanistan was a haven and a training ground for terrorists who had committed horrific attacks. That was why intervention was necessary. Today, more than 10 years later, we can decide that this mission can be terminated because we want to transfer responsibility to the Afghans. Decisions must always be seen in their historic context.

SPIEGEL: How do you see it today?

Schröder: It will take a long time, perhaps even decades, to evaluate whether the entire mission, lasting more than 10 years, was the right thing. One thing is clear, however. If Germany had made a different decision, we would have been isolated and would have truly jeopardized the German-American relationship.

SPIEGEL: That didn't prevent you from saying no to the Iraq war.

Schröder: That was a different situation. We were not convinced that that war made sense. We were sure that there were no weapons of mass destruction, and we were concerned that the entire region would be destabilized in the long term. Besides, there was no NATO mission, nor was there any legitimization by the UN Security Council.

SPIEGEL: That didn't happen for Kosovo either.

Schröder: That's right. The Russians obstructed that, for historically understandable reasons. That was why the mission was not unproblematic from a legal standpoint. But we felt that it was necessary.

SPIEGEL: Your arguments are very unemotional. You cite treaty obligations and laws. Others used moral arguments to justify their positions at the time. Joschka Fischer even invoked Auschwitz in the Kosovo debate.

Schröder: I understand why he argued in that way because he was having great difficulties convincing his party to agree to our participation in the intervention. Nevertheless, I don't share that argument, because it calls the singularity of the Holocaust into question. But it is correct that there was a moral justification. There was forced expulsion and the threat of genocide in the middle of Europe.

SPIEGEL: You also mentioned girls' schools as one of the reasons for the Afghanistan mission. Do we need a moral component in Germany to justify war because reasons related to realpolitik aren't enough?

Schröder: Well, merely invoking the NATO Treaty would have been too abstract. We had to argue that the goal was to stop the activities of terrorists and oppressors. It isn't a bad thing for the German population to demand a moral explanation for a military intervention. I'm happy that the days are gone when Germans went to war with enthusiasm, as was the case in 1914.

SPIEGEL: But girls' schools weren't at all the issue in Afghanistan.

Schröder: And no one was claiming that that was the only reason. It was a matter of freeing people from the stranglehold of the inhuman Taliban regime, fighting terrorism and stabilizing the country. I visited two girls' schools at the time. I knew that those girls only stood a chance because of the international intervention. It moved me greatly. And it played a role in us sticking to our guns when things became difficult.

SPIEGEL: Many of those schools were later closed again. This highlights the problem with using a moral argument.

Schröder: The argument isn't invalidated by the fact that it isn't possible to achieve all goals.

SPIEGEL: Are politicians further along than citizens when it comes to the willingness to engage in military campaigns?

Schröder: Politicians don't make it easy for themselves, either. For me these were the most difficult decisions of my chancellorship. But there is a difference between what people feel and would like to see happen, and what has to happen. It's much easier to argue in favor of staying out of something that to say we're getting involved.

SPIEGEL: Was it because of this general mood within the public that you didn't refer to the Afghanistan mission as a war?

Schröder: It certainly played a role.

SPIEGEL: Three years ago, then Defense Minister Karl-Theodor zu Guttenberg was the first one to mention the word "war."

Schröder: If that was his historical contribution, then we should accept it as such.

SPIEGEL: You supported the Afghanistan war out of loyalty to NATO. You said no to (former US President) George W. Bush's campaign against Iraq. Was that the point at which German foreign policy came of age?

Schröder: Yes, in a sense. By saying yes to Kosovo and Afghanistan, we Germans became an equal partner in the international community. A partner with obligations to fulfill, but one that had also acquired rights. That includes the right to say no when we are not convinced that a military intervention makes sense. But my policy wasn't entirely without historical precedent. When former Chancellor Willy Brandt devised his Ostpolitik policy, there were very intensive discussions with the United States, which wasn't convinced that it was the right approach. But he remained undeterred. In terms of fundamental issues, German foreign policy was shaped in Bonn at the time, and it was the same under former Chancellors Helmut Schmidt and Helmut Kohl. In other words, it was done in Berlin and not in Washington. That's how I put it later on.

SPIEGEL: The same words could also be applied to the current German government's decision on Libya. Unlike all Western allies, Germany abstained in the UN Security Council vote two years ago.

Schröder: I think it was the sovereign decision of a German government. I didn't comment because I didn't know how I would have decided.

SPIEGEL: Do you approve of the abstention?

Schröder: I can understand how difficult it is to make the decision to intervene militarily. The decision by the UN Security Council was, to put it diplomatically, interpreted very offensively.

SPIEGEL: You mentioned loyalty to the alliance and humanitarian considerations as legitimate reasons for military intervention. But why not German security interests, as well?

Schröder: Which ones do you mean?

SPIEGEL: Your recently deceased fellow Social Democrat, former Defense Minister Peter Struck, once said: "The security of the Federal Republic of Germany is also being defended in the Hindu Kush."

Schröder: That was an attempt to create another reason. I prefer not to comment on this any further, out of respect for Peter Struck.

SPIEGEL: Should the West intervene in Syria?

Schröder: Regardless of the fact that the UN Security Council wouldn't approve it, no one is exactly sure of the identity of the forces that could gain the upper hand with the help of the West. In this respect, I share the reserved position of the German government.

SPIEGEL: In the past, Germany tended to hide behind others, even in Europe. Now Polish Foreign Minister Radoslaw Sikorski is calling for German leadership. Are we prepared to take this step?

Schröder: Because of its economic power and its political significance, Germany is currently destined to assume leadership within the European Union. However, I too came to the realization, during my term in office, that Germany could only lead in Europe in the way that porcupines mate.

SPIEGEL: How do porcupines mate?

SPIEGEL: That was the conservative Christian Democratic Union's parliamentary floor leader Volker Kauder. How is the chancellor doing her job?

Schröder: Mrs. Merkel was very late in making the necessary decisions to provide aid and show solidarity. It has certainly made rescuing the euro more expensive. But she doesn't refuse to provide German leadership. Instead, she exercises it in a restrained fashion. I think that's fine.

SPIEGEL: Mr. Schröder, thank you for this interview.