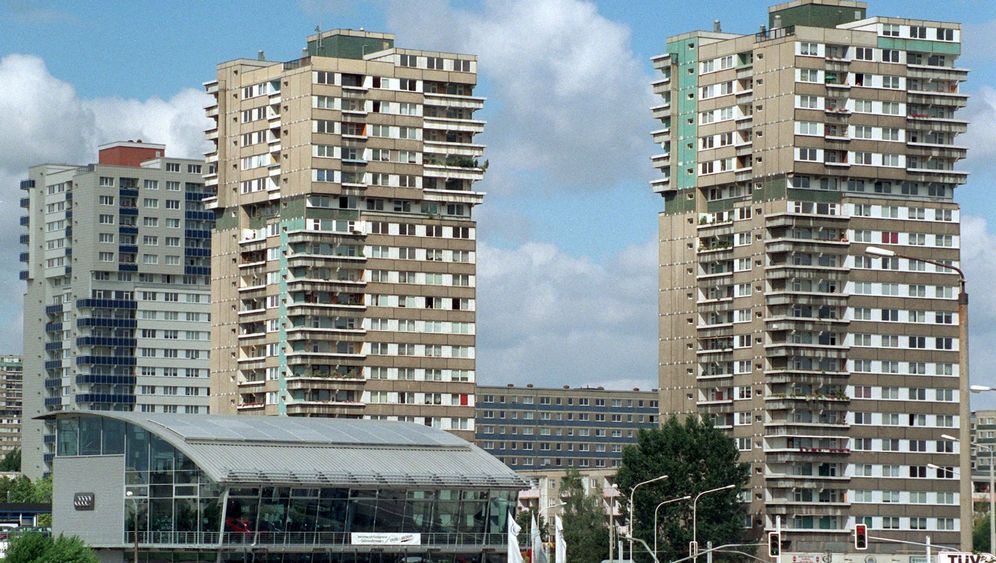 SPIEGEL ONLINE: Professor Speer, in the 1940s a working group under the supervision of your father, also named Albert Speer, recommended rebuilding German cities destroyed by war more spaciously, with buildings widely dispersed. The idea was to make them more difficult to bomb in the event of another war. After World War II, many German cities adopted this spacious design concept. Did those designs actually have Nazi roots?

Albert Speer: No, the idea of aerial defense did not play the role in reconstruction that many say it did. Many of the planners involved in reconstruction had also worked prior to the Third Reich. They wanted to go back to that unsullied period -- to the 1920s modernist utopia. Modernism promised two things. It offered the opportunity to break free from Nazi marble, from the so-called "heroic style" of construction. And, depending on how much industry a city had, it finally provided an opportunity to design cities that were practical, car-friendly, light and spacious -- using new materials, including more room between neighbors and installing expansive green spaces.

SPIEGEL ONLINE: Most, however, didn't find the spacious, concrete modernist design terribly liberating. Indeed, after 30 years of modernist construction, people rediscovered the charms of cramped historic city centers, to the extent they still existed. Was reconstruction an architectural failure?

Speer: From today's perspective, of course it is easy to say that not everything succeeded. In part, such criticism is certainly accurate. But I also have to defend the architects. Consider the situation after 1945. Frankfurt Mayor Walter Kolb said in 1952 that although we look with reverence to the "mighty past," we must "create the new in the spirit of our times." Innovation meant getting away from the maze-like streets of the old town centers, constructing wide boulevards and building lines of low-cost housing blocks around the cathedral. People like Kolb were the clients. The architects wanted those contracts.

SPIEGEL ONLINE: Still, why didn't architects put up a little more resistance to the ideas espoused by those clients?

Speer: Because they themselves were fascinated by the idea of a completely fresh start. And that's entirely understandable after the Nazi debacle.

Speer: There was. Modern architecture was connected to the idea of creating better human beings through better building -- enlightened, responsible citizens with a social conscience and a new self-awareness. But we've since learned that architects are not social engineers. This entire pretense -- what we think today is the only correct way and what those who came before us thought is meaningless -- is presumptuous. This new consciousness they were trying to create was utterly devoid of history. People truly detested their history. The real cause of the calamity of postwar construction is this complete rejection of history. But no single architect was to blame for that.

SPIEGEL ONLINE: Why is an awareness of history so important for city planning?

Speer: Only the interplay between old and new creates diversity. Part of the beauty of a city is that its buildings reflect various epochs. These buildings don't always need to be especially beautiful, but they need to stand for something. A city's character is not only formed by its current function but is also deeply rooted in its history. An architect wanting to respond to this must have a deep knowledge of history. The architectural diversity of Germany's regions, which has grown over the course of centuries, must be preserved and considered during new construction. This is vital if we want to retain the nation's architectural identity. Globalization, after all, has also been standardizing global building styles for some time.

SPIEGEL ONLINE: In the 1980s, your firm recommended that the city of Frankfurt build a "boulevard" of skyscrapers between two historical buildings. Wasn't that also presumptuous and neglectful of historical considerations?

Speer: At the same time, we also recommended that the city not allow any more skyscrapers apart from that axis. That saved many lovely old villas in the Westend area from being demolished, which was also a goal of citizens' initiatives that started in the early 1970s. And skyscrapers are beautiful constructions, like church steeples. I'm absolutely in favor of skyscrapers when they're located in the right place and when the concentration of offices in them prevents residential buildings in the city from being converted into offices.

SPIEGEL ONLINE: You're in favor of office towers but not residential towers?

Speer: High-rise residential buildings are best suited for single people and childless couples. They work only in special cases and when they are of the highest standard. An office high-rise in the Niederrad district of Frankfurt is currently being converted into a residential building for managers who only plan to spend a short time in the city. It's going to be very elegant. But when you plan high-rise apartment buildings for everyone, you risk those buildings quickly falling into disrepair.

SPIEGEL ONLINE: The city center of Cologne is soon to be re-worked according to a master plan that your firm came up with. What is the core concept?

Speer: The wide, north-south road that brutally divides the city center for three kilometers (1.9 miles) will be considerably narrower, greener and more urbane, with more pedestrian crossings. We want the large ring road around the city center, constructed in the 19th century, to be recognizable as a connector of the metropolitan spaces, but with the character of a boulevard. And the mixture of different, vital activities occurring within a small area in Cologne should be better protected.

SPIEGEL ONLINE: In China, you have designed two "automobile cities." But do cars actually have a future in cities? You said 20 years ago that in two decades, city centers would no longer be usable for cars. That prophecy seems to have been mistaken.

Speer: Not entirely. If all the cars registered in a city drove at the same time, they would all be stuck in traffic jams. Cars only function in cities today because working hours are more flexible than they once were and because -- as in Frankfurt, for example -- around 80 percent of office employees use public transportation. Of course cars belong in cities too. A purely pedestrian city would be sterile and impractical. But the number of cars needs to be reduced. I was right about the trend.

SPIEGEL ONLINE: What are you working on at the moment?

Speer: We're analyzing the capability of Cairo to host the Olympic Games. Egypt may have a chance in 2020. 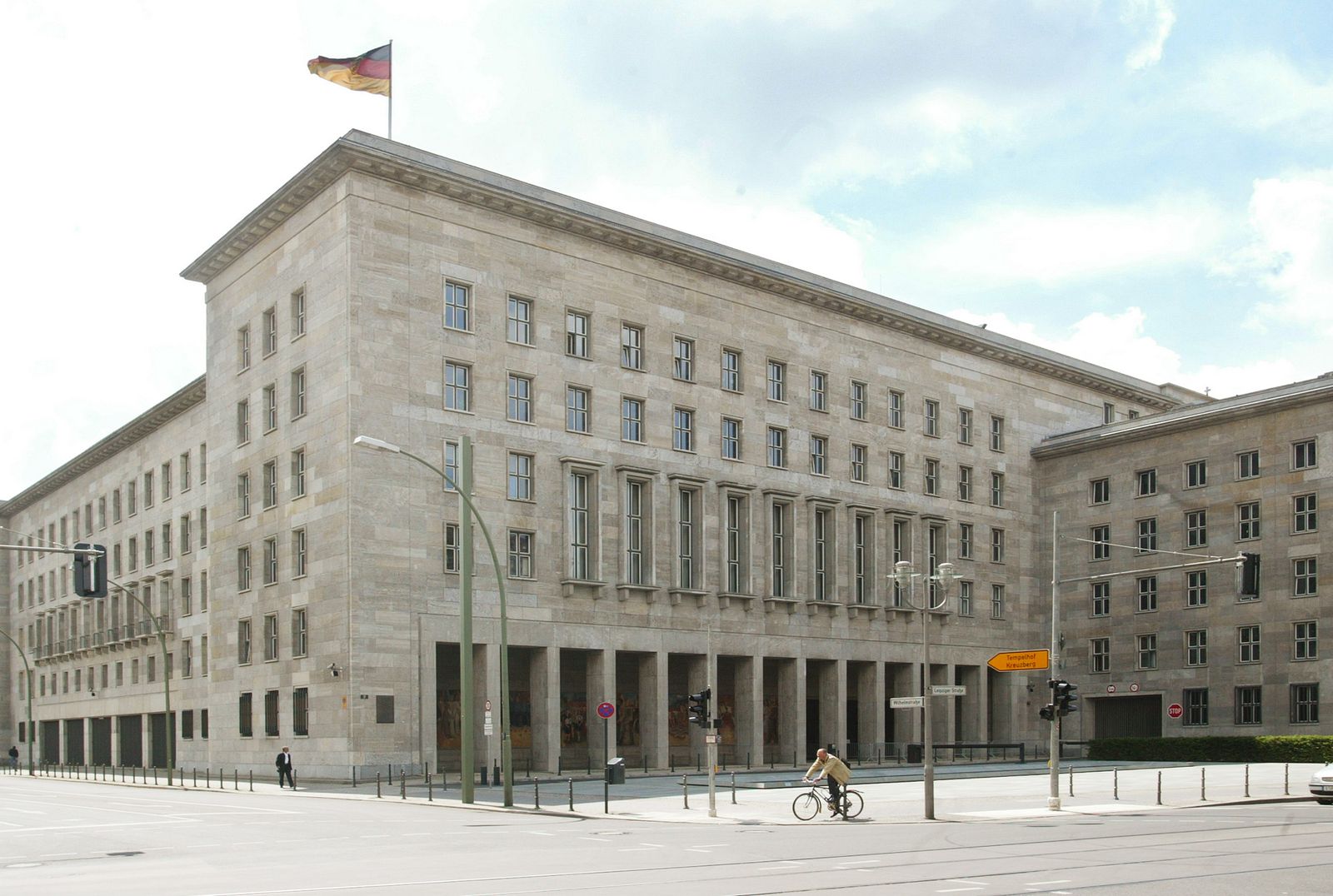 Postwar architects latched on to 1920s modernity as a way to escape the heavy "heroic style" of Nazi architecture. Here, the Nazi airforce headquarters in Berlin. Today, the vast building houses the Finance Ministry and, ironically, it was one of the few Berlin buildings that survived the war relatively undamaged.