Exactly 65 years ago, on Feb. 13, 1945, Allied bombers decimated the city of Dresden with a deadly combination of explosive and incendiary bombs. The resulting firestorm killed some 25,000 people and left the city in ruins.

It was not the most deadly of the many firestorms Allied planes visited upon Nazi Germany during World War II. But for many, it has become a symbol of excessive violence. Many in Germany's far right, in fact, refer to the event as the "bombing Holocaust," an apparent attempt to relativize Nazi Germany's enormous World War II crimes. Saturday will once again see neo-Nazis descend on Dresden for a demonstration. 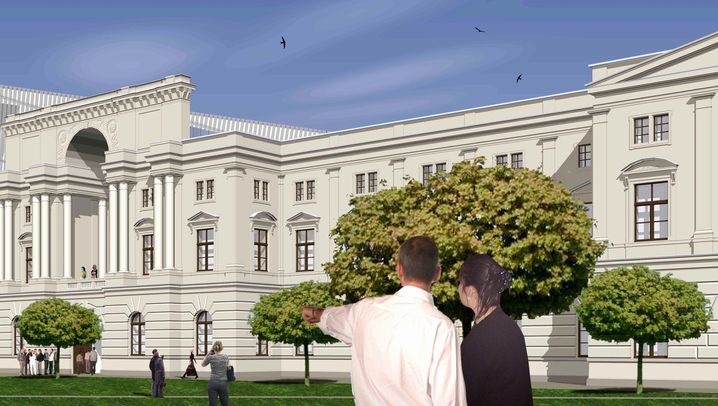 Meanwhile, the city continues to rebuild, with many of Dresden's historical structures now returned to their pre-war glory. In addition, a remodelling of Germany's military museum in Dresden is currently underway that has been designed by architect Daniel Libeskind. SPIEGEL ONLINE spoke with Libeskind about Dresden's relationship to its past and about the challenges of designing a military museum for Germany.

SPIEGEL ONLINE: Mr. Libeskind, you redesigned the German military museum in Dresden, but have taken the liberty to dramatically alter the front of the building, creating a clear break with the structure's staid, 19th century design. It is a break with the past, but is it not one which many in Dresden don't seem to want?

Libeskind: That could very well be. There are people who want to see history as merely an endless chronology of events. But there is an interruption, a fundamental dislocation -- particularly when it comes to Germany's Nazi period.

SPIEGEL ONLINE: Architecturally, to be sure, Dresden has shown a predilection for wanting to ignore that dislocation. Already, the city has spent hundreds of millions of euros in its effort to recreate the city as it existed prior to the bombing.

Libeskind: I can understand the impetus of the city wanting to retrieve its past. People want to have something of the city's glory days. But even if you rebuild the Frauenkirche and the city's other great buildings, you cannot bring back the history. The city has been fundamentally altered. The events from the past are not just a footnote, they are central to the transformation of the city.

SPIEGEL ONLINE: There has indeed been a lot of criticism of Dresden's approach to its history.

Libeskind: I share the criticism. Look at Berlin, which has understood -- in an exemplary way -- that you can't just recreate that past. You can rebuild the baroque buildings in Dresden, but you would sap the life out of the city. Sentimentality is not a foundation on which you can build a new city.

SPIEGEL ONLINE: You agree, then, with those who would say that Dresden needs to do more to confront its past?

Libeskind: Definitely. I definitely feel it. You need more than a small sign here and there. Things have happened that are forever going to be there, and those things, if they are not acknowledged, can only create something that isn't good for the city. If you nostalgize history and are only interested in the picturesque, you give a message that you want to return to the good old times before 1933. But new things can be done that acknowledge that Dresden is moving forward.

SPIEGEL ONLINE: Like the new military museum. Such a project in Germany, with its difficult 20th century past, is certainly not without its challenges. How did you approach the reconstruction of the arsenal in Dresden?

Libeskind: It is, of course, a delicate task, but it's also very important. In a united, democratic Germany, a military museum should be part of the city. The military is part of a democracy. That's where the delicacy, but also the importance of presenting such a museum to the public, lies.

SPIEGEL ONLINE: How do you express that delicacy architecturally?

Libeskind: The new architectural feature penetrates the historical arsenal and creates a new accent on the front. It creates a 21st century reading of the complex. It is something like a lantern, a signal, a beacon that evokes the city itself. After you ascend through the historical collections inside the building, you arrive at a new view of Dresden. It is the best-possible canvas of the history which you saw in the museum.

SPIEGEL ONLINE: It is a canvas, of course, that was almost completely demolished in the Feb. 13, 1945 bombing of the city. How did you incorporate that event?

Libeskind: The triangular structure on the front of the arsenal points to the direction from which Dresden was bombed. It also interrupts the smooth flow of that big arsenal. It creates a question mark about the continuity of history and what it means. It gives people a point of reflection.

SPIEGEL ONLINE: A lot of the projects that you have worked on -- the Jewish Museum in Berlin, Ground Zero in New York and now the military museum in Dresden -- have to do with remembering painful events of the past. You don't find such assignments daunting?

Libeskind: I think such projects are vitally important. I have been very fortunate to be part of projects that deal with memory. It is a very challenging task, no doubt about it, to deal with tragedies that cannot be unmade. At the same time, it is hopeful work because you can transmit knowledge to a new generation of people -- a lesson that history should be lived in a different way.

Libeskind: You can't do architecture if you don't believe in a better future. You might as well be a poet or a musician composing in a minor key. But to be an architect, you need to construct something.