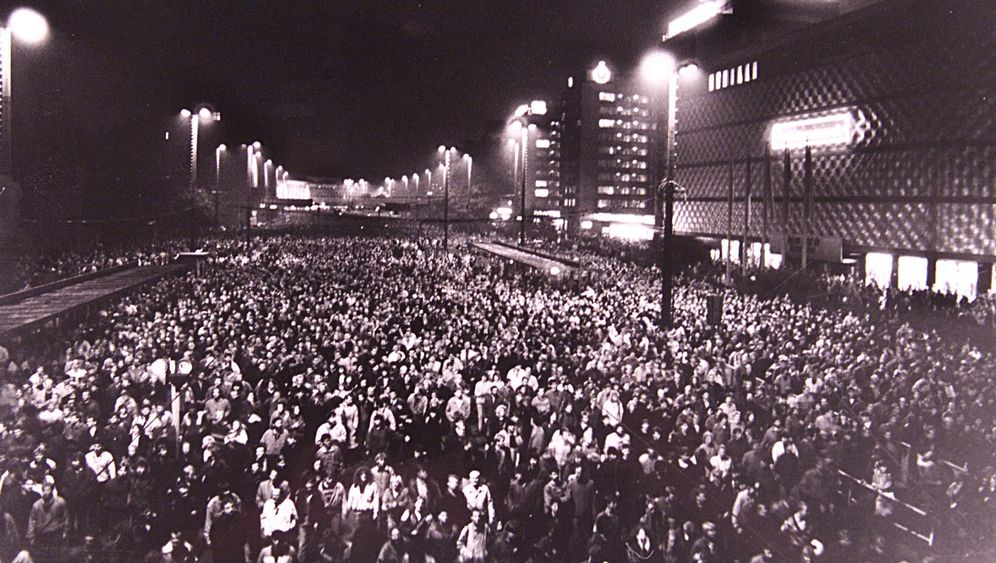 Kurt Masur, 83, is considered one of Germany's most important conductors. In a SPIEGEL interview, he discusses his role in the peaceful revolution of 1989, his troubled dealings with officials in Communist East Germany and how German reunification has left many eastern Germans in despair.

SPIEGEL: Professor Masur, you're credited with being one of the people who kept the Monday demonstrations held in Leipzig in 1989 to protest the East German government from turning bloody. As the situation was threatening to escalate, loudspeakers in Leipzig broadcast your appeal, in which you asked the city's inhabitants: "We urgently request that you remain calm so as to make peaceful dialogue possible." And, as it turned out, the demonstrations did remain peaceful. What's left of the spirit of that era?

Kurt Masur: I'm reluctant to answer this question. The spirit of those days has pretty much been exhausted, and things haven't turned out well for everyone. In fact, for many people, reunification has meant more suffering than gain. And many are quite desperate.

SPIEGEL: What do you mean by desperate?

Masur: I know of people who decided to kill themselves because they'd lost everything dependable in their lives. Just look in the eyes of the young people: Just one year after reunification, most had lost their sparkle. On the one hand, there's unemployment and the feeling of being superfluous. On the other hand, many in this generation never even try to find a job. They figure out that they can live fairly well off government benefits and earning a little extra money on the side.

SPIEGEL: You sound disappointed. Were your hopes really so high in 1989?

Masur: It was heaven on Earth. I've never seen so many happy faces as I did on that October 9 (the day of the largest protest). It was a peaceful revolution. And it was proof that people in the German Democratic Republic (GDR) had learned to act in a very politically deliberate way. I'm still impressed by how smart they were -- and by the way the security forces remained calm. On that day, not even a single window was broken.

SPIEGEL: Did you really see those events as a revolution?

Masur: In a certain sense, yes. When 17- and 18-year-olds said goodbye to their parents that day, it was like they were heading off to war. But everyone had had enough. All of them -- all 70,000 of them -- were able to overcome their fears.

SPIEGEL: Military units were deployed around Leipzig, ready to respond to the protests.

Masur: We could only make guesses about that. We'd read in the paper that, if necessary, the protests would be broken up by force of arms. When they heard that, representatives from the New Forum (editor's note: a reform movement started in 1989) got in touch with me. My office at the Gewandhaus became something of a communications center that day. I called Kurt Meyer, the party's cultural representative. When he called back two hours before the demonstration was supposed to get underway, a small group gathered at our house and rushed to draft the appeal, which I then went on to record onto a tape.

SPIEGEL: A total of six people signed the appeal: a theologian, a cabaret performer, three district secretaries for the ruling Socialist Unity Party (SED) and you.

Masur: Yes, I wasn't the only hero. We were a miniature version of the people, and we had to agree on consistent wording. The three comrades from the party hadn't received specific instructions from Berlin, so they were constantly telephoning back and forth.

SPIEGEL: Did it feel like you were making history?

Masur: At the time, we weren't thinking about changing the world. The most important thing was to act. For weeks, the public mood had been at breaking point. At a certain point, the Gewandhaus Orchestra had to call off a recording we were making. The oboe soloist apologized, saying: "Mr. Masur, I can't do it anymore. I just passed by the church, and they were throwing a young girl onto a truck by her hair."

SPIEGEL: You led a performance on the night of October 9. How did the concert go?

Masur: Well, the demonstration was over, and no shots had been fired. But, just in case, I put on my tailcoat. The orchestra manager came and said: "The house is full; all the musicians are here. We can begin." That was the strangest part about this revolution: The revolution was Monday evening and, by Tuesday morning at the latest, everyone went back to work as usual. I will never forget that concert.

SPIEGEL: As part of your job, you had to deal not only with intellectuals and artists, but also with members of the Communist Party. Was your loyalty ever questioned?

Masur: Only someone who hadn't lived in the GDR would see a contradiction there. Leipzig is one of Europe's music centers. Bach, Mendelssohn, Brahms, they all worked there, and the Gewandhaus belongs to the heart of the city. As its director, of course I had to work with the people who ran the country and the city. I welcomed Mr. Honecker (the GDR's leader from 1971 to 1989) to my concert hall just as graciously as I would have kissed the Queen of England's hand if she had come there. I was the host.

Doing Something for the Common Good

SPIEGEL: You succeeded in convincing Honecker to let you have a new building -- and one that attracted a lot of attention. It's located right in the heart of the old city and was the only dedicated concert hall built during the GDR era. What did you have to do to get it?

Masur: I wrote to him. Our 200th anniversary was approaching, in 1981. And, since the end of the war, the orchestra had been temporarily housed in a convention hall near the zoo. When the music was quieter, you could hear the lions roar. We were on the verge of embarrassing ourselves in front of the entire world. So, having first figured out how I was supposed to address him, I shared this with "Comrade Honecker."

SPIEGEL: And what was his response?

Masur: He addressed me as "Comrade Masur," which was incorrect, since I wasn't in the party. But the respect he showed the orchestral tradition was remarkable. For example, every year, all of the orchestras in the GDR had to perform a world premiere of a commissioned work by a young composer. I only wish some of the politicians today could have similar foresight when it comes to these kinds of things.

SPIEGEL: You brought a lot of public criticism on yourself by writing a thank-you letter to Honecker after his political career came to an end. Were you a supporter of his?

Masur: No, but there were reasons for me to thank him. In the case of the Gewandhaus, he used his position to do something for the common good.

SPIEGEL: The GDR also saw people shot and killed for trying to cross the border, an economy of scarcity, political prisoners and a secret police, the Stasi, that spied on ordinary citizens. Were you living in an unjust state?

Masur: That's not an easy question to answer. The basic idea behind Communism wasn't dictatorial in nature. And the premise of socialism -- that every individual is of equal worth -- was also fine. But, of course, everything that came after that was a dictatorship, and it reached its high point under Stalin. There were moments when it curtailed my own freedom, as well.

Masur: Until 1964, I worked at the Komische Oper Berlin under Walter Felsenstein. For the next three years, I was unemployed, so to speak. I didn't have an orchestra, and I wasn't allowed to travel to the West for guest-conducting engagements. In political terms, they wanted to starve me out a bit.

Masur: There had been a number of incidents. I was part of a group of people who worked in the arts who had been invited to meet with the Central Committee. Walter Ulbricht (editor's note: then the general secretary of the SED, the East German communist party) gave an impassioned speech about an artist's duties in the GDR. Wolfgang Langhoff, who had directed the Deutsches Theater in Berlin, had fallen out of favor, apparently because he hadn't done enough to put himself at the service of socialist realism. Ulbricht really thundered at us. A few days later, there was another talk and a request for us to enter into a dialogue. I responded: "After your displays, discussion is no longer possible." After that, things got rough for me.

SPIEGEL: How did you navigate your way back into favor?

Masur: It wasn't a matter of favor. I had been invited to conduct "Lohengrin" in Venice. And even though I was banned from traveling, I accepted. Then I contacted the minister of culture and explained that, if necessary, I would make the trip even if I didn't have a visa, and that if anything happened to me at the border, he would share in the blame. I had my authorization by noon the next day.

SPIEGEL: Compared to most people in the GDR, you enjoyed a privileged position, like those of athletes.

Masur: That's true. And I was famous enough that I could afford to speak the truth. They knew there was something not quite right about Masur. And, what's more, I was a Christian…

SPIEGEL: …in an atheist regime.

Masur: My religious practices were closely monitored. I once put money in the collection plate after an organ concert at the Church of the Cross (in Dresden) and a minister in the audience asked me: "You support the church?" I replied that the organ was out of tune and the congregation needed money to fix it. The next day, the organ builder contacted me, and he was very unhappy. The Stasi must have told him what I had said.

SPIEGEL: What is in your Stasi file?

Masur: It contains a comprehensive character profile, including my supposedly "strong inclination toward the fairer sex." But all of the entries made around the time of reunification seem to have been destroyed. The file also shows that one of my long-time employees provided the Stasi with details about my friendship with Alfred Schnittke, the Russian composer. Another employee was told to spy on me while we were on tour abroad, but he refused to do so.

SPIEGEL: Did anything happen to you if any of your musicians defected while touring abroad?

Masur: I had to come up with an excuse. And I'm sorry to say that I wasn't the one to coin the best one. That honor goes to the former chief conductor of the Leningrad Philharmonic. A Soviet party functionary once asked him: "Mravinsky, what's the matter! A few of them abandon you every time!" And he responded: "They're not abandoning me; they're abandoning you!"