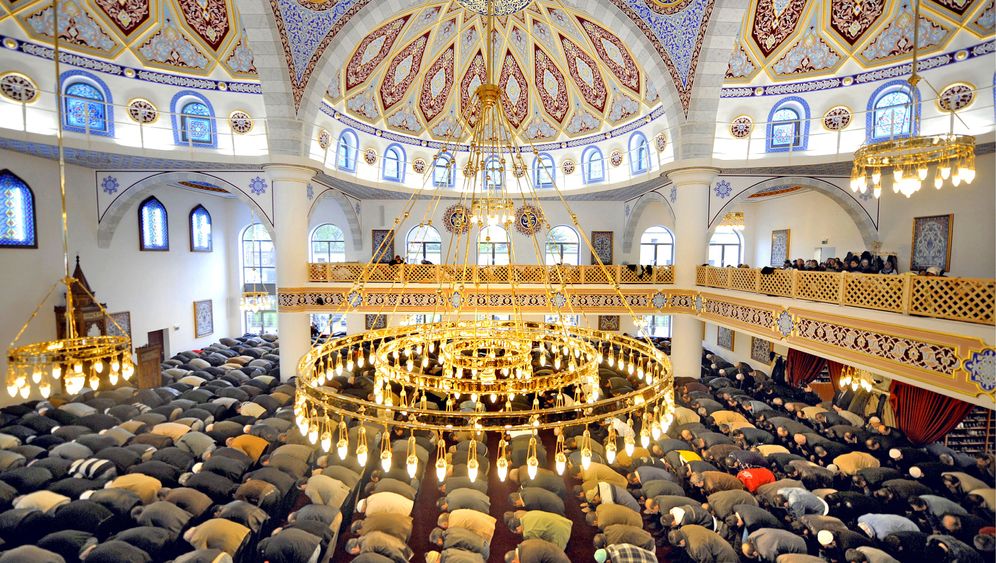 SPIEGEL: In your new book you talk about meeting an imam in Germany who admits to "sympathizing with Bin Laden" because he believes Bin Laden is "fighting western terrorism." Is this man a classic preacher of hatred?

Ceylan: Yes, he is indeed one of those who preach hatred. He and others like him represent an extreme type of Islam. They are generally relatively young, very eloquent, able to express themselves in German, and usually form groups separate from organized Islam, in other words outside the mosque associations. They have not trained in theology, and they radically simplify Islam, which makes them attractive to young people in particular. They are extremely skillful at mobilizing people, and that's what makes them so dangerous.

SPIEGEL: Where do they come from?

Ceylan: I've been able to have in-depth discussions with three of them. They all had abrupt shifts in their lives. For instance, one extreme left-wing Kurd who supported the Kurdish Workers' Party -- the PKK -- suddenly became a conservative Muslim extremist. Another divorced his wife because she was no longer Muslim enough for his liking. These imams give a political spin to religious dogma. They claim that Islam has been manipulated over the course of its 1,400-year history, and they call for a return to its original state in what they see as the "Golden Age."

SPIEGEL: Surely you can't become an extremist from one day to the next, can you?

Ceylan: They started as young men who had an identity crisis and sought spirituality. They met charismatic extremists who recommended certain books and set them on a radical path. Some even fly to Saudi Arabia to study for one or two years, before returning as true hardliners.

SPIEGEL: How many of these extremists live in Germany?

Ceylan: Among the 2,000 or so imams (who live here), they are a minority. I can't quantify it any better than that. They don't preach in normal mosques, but behind closed doors in cultural associations. An official at the German Office for the Protection of the Constitution told me this week, "If a right-wing extremist pees against a tree, we learn about it, but we know very little about what Muslim extremists are doing." They try to remain inconspicuous, while at the same time winning over as many Muslims as possible for their ideas. They primarily target 15- to 25-year-olds.

Ceylan: They mainly use the streets. They're street-workers, and of course they also hook up with mosque associations, where they give talks on topics that interest younger generations -- education problems, youth crime. Once they establish contact, they foster it, and eventually their real agenda surfaces.

SPIEGEL: Do these imams actually say as much when you speak to them?

Ceylan: If someone openly sympathizes with Bin Laden, says, "It is the duty of every Muslim to support jihad in Afghanistan," considers all Islamic associations and organizations to be apostates, and accuses their members of not being proper Muslims, I must assume they also take the final step in their minds and try to recruit young people (for terrorism). This is backed up by the experience we've had with the Sauerland group, with the would-be suitcase bomber, and with video messages sent by Germans in Pakistan and Afghanistan.

SPIEGEL: What is the empirical basis for your conclusions?

Ceylan: I conducted 44 in-depth interviews and about 250 background interviews with imams. My goal wasn't a representative survey. I wanted to provide insight into a completely un-researched social scene, and to spark debate. At any rate this is the first time a significant number of imams in Germany has talked about what they really believe.

SPIEGEL: What can mosque associations do to keep these extremists from recruiting people?

Ceylan: First of all they should be more aware of (radical) insinuations and suggestions. But this would require German-speaking imams who have both feet firmly planted in society, who are aware of what is going on.

SPIEGEL: Isn't that already the case?

Ceylan: Seventy-five percent of the imams in our mosques are conservative traditionalists. They oppose quick reform and perpetuate traditional role models, like those regarding relations between men and women. I call them "the Prussians among imams."

Ceylan: Because they espouse obedience to authority, patriotism, religious tolerance, fear of God, as well as a positive attitude toward the state. They live in their enclaves, speak little German, and generally take jobs here because they pay well. They don't understand that the role of imam is different in Germany from the role in Turkey.

Ceylan: In many Islamic countries, mosques are just places of worship, where the doors are locked again after prayers. Our mosques have become multifunctional. They might contain a library, a place to eat and other services. Imams in Germany are consulted about marital problems, issues around divorce and educational matters. But they cannot fill these associated roles if they don't know what sort of assistance is available, or which networks there are. Do you think an imam from Turkey knows what debt counseling is, or whom to telephone about it?

SPIEGEL: Why then do you still believe that imams are "key figures" in integration?

Ceylan: Because people are flocking to the mosques. Friday prayers are always packed. An estimated half-million Muslims in mosques there every week. Not all of them are particularly pious. Even hedonistic young men go to Friday prayers.

SPIEGEL: And what are they told?

Ceylan: The preachers tend to discuss about issues that are completely divorced from everyday life. I've experienced it myself. I heard one imam preach about zakat, the Islamic tithe. He said that if a farmer has so many hectares of land, he must pay this much zakat. His audience was made up of welfare recipients and industrial wage-earners for whom this meant nothing. That's maintaining your native identity abroad. It's not integration.

SPIEGEL: You're not painting a pretty picture. Haven't you met any imams who favor integration?

Ceylan: Seventy-five percent of conservative imams may be in favor of it, but they are simply not qualified to promote it. We could undoubtedly reach some through training. The approximately 15 percent of progressive, intellectual preachers have demonstrated how imams can promote integration.

SPIEGEL: How would you characterize this group?

Ceylan: They come from religious families, and they have critically evaluated traditional interpretations of the Koran. They have a contemporary view of the Koran, they are very open-minded about other religions, and they have a modern view of the roles of men and women. They also address real-life issues like the men's cafés that have turned into gambling dens, where alcohol is served and eastern European women provide entertainment. In some cases these cafés come under the influence of the Islamist rat-catchers. Progressive imams try to address young people in a new way. They do things like organizing soccer competitions. But they often find themselves isolated within the mosque associations. Many older members of the congregation say, "Imams should teach people about the Koran, not run after a leather ball."

SPIEGEL: One progressive imam in your interviews complains that younger members of the congregation are leaving their mosque and founding their own groups as soon as they complete their theological training. How common is that?

Ceylan: I can see this brain-drain taking place in the Ruhr Valley and in Cologne. Highly-trained academics are leaving mosque associations out of frustration with the slow pace of modernization in their communities. At the same time, they tend to lose contact with the Muslim grassroots.

SPIEGEL: How do Islamic associations react?

Ceylan: They haven't yet. But by not doing so, they lose their most important human resource: the forces that could modernize these associations.

SPIEGEL: The German government and the Council of Science and Humanities want to train imams in Germany. Do you think that's a good idea?

Ceylan: Certainly. There is a desperate need to create structures to enable Islamic theology to be taught in Germany. I personally would bundle everything together at a central university, but the Council of Science and Humanities prefers having two or three locations. Osnabrück plans to open an Islamic institute in 2012. But it will be difficult to find qualified theology professors for other locations.

SPIEGEL: The Turkish state employs some 800 imams in Germany through the Ditib organization. Do you think Turkey will tolerate such a move?

Ceylan: There will undoubtedly be conflict. Ditib doubts that German institutes will even be able to provide proper training. In reality it's about influence: Many imams in Germany at the present time are Turkish civil servants who return home after four years. What we need in the long term is a form of Islam that emancipates itself from the various countries of origin. What we need is a separate and authentic theology that is native to Germany and Europe.

Ceylan: We will never completely prevent them doing so, even if more Muslims co-operate with authorities and report people who incite hatred. Nevertheless we must counteract it with a large number of well-trained, eloquent, popular imams -- real stars. I recently met a 19-year-old-Muslim who was in touch with an ethnic Russian extremist. This young man came from a secular family and wanted to learn more about his roots. I tried to explain to him that Islam is pluralist, not as simple or extreme as Islamists would have him believe.

SPIEGEL: What can we learn from this?

Ceylan: We have more than 900,000 male and female Muslim students in Germany. Mosque associations provide Islamic teaching, but restrict themselves to recitation and memorization. What we need is solid Islamic religious education that offers the opportunity for critical debate. We've been discussing it for 10 years now, but little has happened.