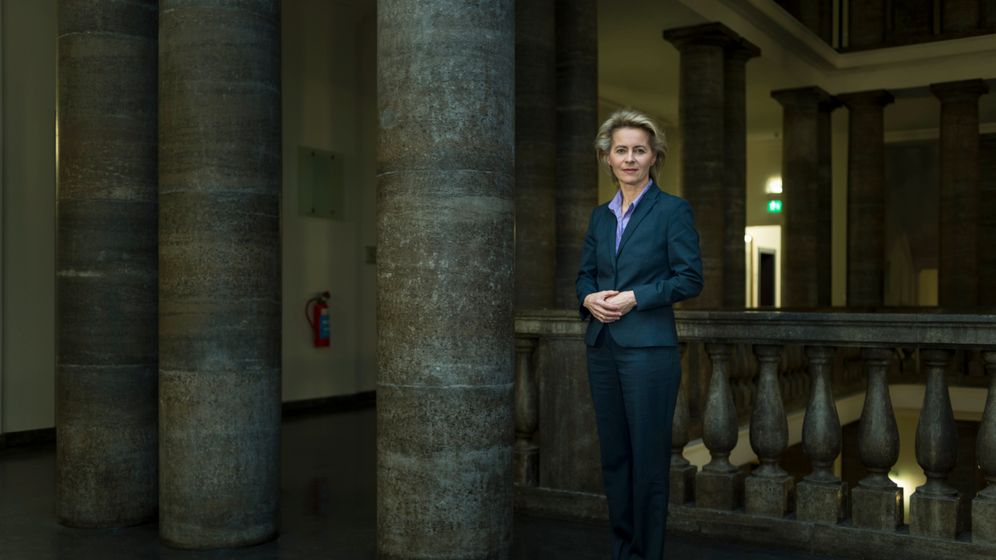 SPIEGEL: Germany would like to become more engaged in Mali and perhaps also join the European Union mission in the Central African Republic. What are Germany's interests in those conflicts?

Von der Leyen: It isn't about German interests; it's about European interests. Africa is our direct neighbor. At the Strait of Gibraltar, the two continents are only 14 kilometers from one another. Should a large part of Africa become destabilized, it could have grave consequences for us. Let me remind you of the terrible images of the drowned refugees off the coast of Lampedusa.

SPIEGEL: The Central African Republic is not in North Africa. The country is 5,300 kilometers away from Germany. Why should German soldiers be sent there?

Von der Leyen: From a purely humanitarian perspective, we can't look away when murder and rape are taking place daily. A bloody war is developing in Central Africa between Christians and Muslims. We can't allow the conflict to engulf the entire region. From a population perspective, Central Africa is small, but it is surrounded by countries with more than 150 million inhabitants. One billion live in Africa. In the next 30 years, that number will double. If this growth takes place within democratic structures, the continent represents an opportunity for Europe. Many African countries today have shown vast improvement and have demonstrated that stability and growth are possible. A booming Africa is an opportunity, particularly for a country like Germany with such strong exports.

SPIEGEL: What will Germany's bolstered engagement in Africa look like?

Von der Leyen: The main focus will be on Mali. Already, the Bundeswehr is training African soldiers in Mali and is assisting in the establishment of an army. Currently, the maximum number allowed by the mandate is 180 troops, 99 soldiers are there. We can strengthen this engagement and our allies, the French first and foremost, expect as much. I can imagine increasing the mandate to 250. In addition, European Union foreign ministers last week cleared the way for a Central Africa mission. Now we have to ensure transparency regarding this mission. The chancellor, Foreign Minister Frank-Walter Steinmeier and I completely agree that it should not become a German combat operation. But the Bundeswehr, with its MedEvac Airbus for example, possesses the special capability of rapidly treating and evacuating the wounded. Should no other ally be able to make this capability available, we should offer to do so. A precondition for such a mission, however, is that the Bangui airport be secured. It is also clear that an expansion of the Mali mission and the aid for Central Africa would each require a parliamentary mandate. Ultimate control of the Bundeswehr lies with parliament.

SPIEGEL: In recent years, allies have repeatedly complained that Germany stands on the sidelines when it comes to foreign missions and lets others do the real work. Does Germany need to take more responsibility around the world?

Von der Leyen: Within the framework of our alliances, yes. Due to globalization, distant conflicts are now much closer to Europe, whether we like it or not. That's why it's in the European Union's best interests to provide for security and stability by helping countries live up to their responsibilities. In Mali, for example, we are training soldiers who are then deployed together with African Union troops in the country's north. In recent years and decades, the fall of the Berlin Wall, digitalization and the integration of the financial markets have illustrated the dramatic consequences of the world growing closer together. Now we have to realize that globalization also includes completely new challenges for defense and security policy. Europe must speak with a single voice in the future when it comes to security policy. But that only works if the responsibilities and risks are divided fairly among the partner countries.

SPIEGEL: Do you believe it was a mistake for Germany to abstain from the 2011 United Nations Security Council vote on intervention in Libya?

Von der Leyen: As a member of the cabinet, I supported the Libya decision. But afterwards, I also saw the aggravation it triggered among our allies. I have learned from the euro crisis that it is important to discuss things through to the end, even if it is difficult, and to find a compromise that all can support. I would like to see that lesson be applied to security and defense policy. We have to define our European position. Only then will the European voice carry weight in the world.

SPIEGEL: The Security Council abstention was the result of former Foreign Minister Guido Westerwelle's policy of "military restraint." Are you advocating for a change in course?

Von der Leyen: There is no crisis that can be solved by military means alone. When one goes in, the political solution must be pushed forward in parallel. Important concepts are: humanitarian aid, economic cooperation and civilian protection, such as through the establishment of a police force. But Europe will not make progress in the global power game if one country always daintily stays away from military operations while another country storms forward without consulting others. We have a curious situation at the moment: Germany is currently engaged in a dozen missions around the world, demanding an enormous military and financial effort. But our allies continue to remember our reluctance, the product of our restraint.

SPIEGEL: Can you understand the disapproval from Germany's partners?

Von der Leyen: Our allies have to understand that we have a parliament-controlled military. In Germany, it is parliament that makes the final decision about troop deployments whereas in France it is the president. Our partners have to accept this dynamic just as we have to accept their idiosyncrasies.

SPIEGEL: The example of Afghanistan demonstrates that even an extended Western military mission is no guarantee of stability.

Von der Leyen: Afghanistan has reached an extremely critical point. The combat mission will terminate at the end of 2014 and we are concerned about the security situation. But we can also point to successes: A large majority of children who grew up under the protection of ISAF troops can read and write. Among the generation of their parents, 70 percent are illiterate. But I don't want to deny that our achievements are fragile. Future developments are not solely in our hands. The Afghan government has to sign the security pact with the US. Only then can NATO and we make plans for the period beyond 2014.

SPIEGEL: What lessons from Afghanistan can be applied to the mission in Mali?

Von der Leyen: There are circumstances in Africa that didn't exist in Afghanistan. The African Union, for example, acted with confidence and seeks to solve problems on their own continent themselves. We are supporting that path. In making decisions about future military missions abroad, it is clear to me that we have to be sure, from the very first day, to strengthen countries in the civil sector as well -- by helping to establish security forces or through development aid. Traditionally, that has been Europe's strength. Military means can only be one of several components if we want to effectively help countries.

SPIEGEL: What would a unified European foreign policy mean when it comes to armaments?

Von der Leyen: Is this age of sinking defense budgets, no country in Europe will be able to maintain all military capabilities across a broad spectrum and in sufficient quantity.

SPIEGEL: Is your goal that of establishing a joint European army?

Von der Leyen: There are many interim steps to be taken before getting to that point. What is clear, however, is that if that happens, European parliaments cannot be rendered powerless. But I believe that joint armed forces would be a logical consequence of an increasingly close military cooperation in Europe.