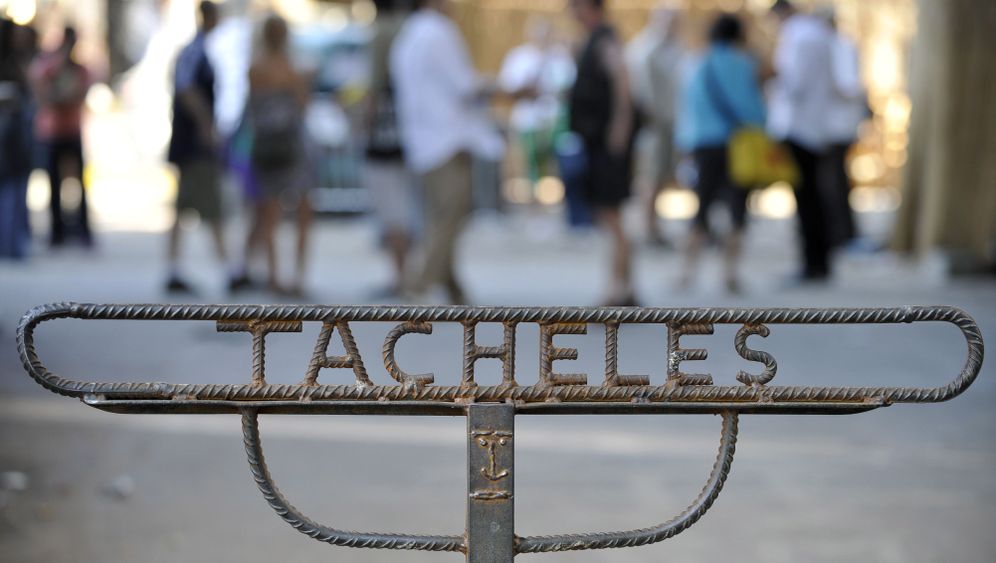 Photo Gallery: Tacheles on the Brink

Berlin's Tacheles arts center, a six-story former department store on Oranienburger Strasse, has become a landmark of the city and a fixture in every guide book. Squatted by a group of artists immediately after the fall of the Berlin Wall, Tacheles has attracted droves of tourists over the past 20 years. But its occupants now face eviction.

The state-owned regional bank HSH Nordbank, which has taken the property into receivership, wants to auction off the building and the surrounding land for redevelopment. The artist residents were told to clear out by the end of July, but so far they haven't budged. They have launched a campaign to save Tacheles and even threatened to go on hunger strike. But it may be just a matter of time before they are kicked out. The bank says that as soon as a date is set for auction, the occupants are going to have to leave.

The ongoing conflict is part of a process of gentrification in central Berlin, as the remnants of the city's alternative culture are forced to make way for apartment buildings and hotels.

Originally a department store, Tacheles was partially destroyed during World War II and was left fallow during the Cold War. Shortly after the Berlin Wall fell, the building was turned an artists' collective complete with a movie theater and bar, and became a symbol of the city's early 1990s counterculture. Since then, it has become a destination for visitors looking for a taste of Berlin's wild past. Between 300,000 and 400,000 people visit Tacheles each year.

Whether derided by locals as a squalid eyesore or sought out by visitors looking to get a peek at the way Berlin once was, Tacheles still stands as "a memorial site of the era of change that might vanish" in Berlin, according to Svetlana Boym, a professor of literature and design at Harvard University. The author of several books and a media artist, Boym studied the changing landscape of Berlin and Tacheles in her 2001 book, "The Future of Nostalgia."

SPIEGEL ONLINE spoke to Boym about Tacheles and what it would mean to Berlin's urban identity if one of its strongest links to the immediate post-Wall era disappeared.

SPIEGEL ONLINE: You've written that Tacheles "embodied a dream of an alternative lifestyle" between East and West Berlin. How did Tacheles help to define Berlin as a city in transition shortly after the Wall came down?

Svetlana Boym: I called Tacheles a "museum in progress" fighting against time. And the way I see it now is that it became a monument to transition itself. It became one of Berlin's identity marks. In my view, it is quite interesting that Tacheles has already survived for 20 years.

On the whole, I think it's possible to define a kind of "new urbanism" by including all these unintentional monuments, monuments to transition and ruined construction sites. I believe that that kind of inhabited ruin that becomes part of the urban structure is in fact at the core of Berlin's identity.

SPIEGEL ONLINE: One of the defining characteristics of Tacheles is that it is a living ruin.

Boym: Right after the Wall came down, there was this desire for a sort of triumphant urbanism, and there was a desire to destroy all memories of the Wall. It's very interesting how alternative groups persisted in preserving bits of the Wall and sites like Tacheles. Tacheles is really preserving a sort of utopian commonwealth because it's like a no man's land and a memory of different kinds of modernities. It started as an arcades building in the early 20th century, then it was supposed to be a palace of technology, then a place of Nazi administration, and then a bombed-out building followed by an East German art school, and finally a place inhabited by artists who dreamed of this form of freedom which I refer to as being "off-capitalist" -- not anti-capitalist but capitalism in a different direction. The building has a history of different dreams of modernity embodied in it.

SPIEGEL ONLINE: In June, you had an art installation at one of the remaining watchtowers along the former Berlin Wall. What interested you about this preserved site?

Boym: The former East German watchtower along the Kreuzberg-Treptow district border is very interesting because most of the watchtowers were destroyed. This one was preserved thanks to a group of East Germans, who themselves escaped through Hungary, so you cannot accuse them of "Ostalgie" (editor's note: nostalgia for East Germany). It's thanks to those people and this kind of grassroots initiative, which represents a kind of informal urban development, that those sites are preserved. Now, of course, the tower and Tacheles feature on tours of Berlin. They're part of the city's landmarks.

Around 300,000 people visit Tacheles each year. I thought about that more than a decade ago; Tacheles was passing for bohemian ruins but it was also already on the route of the tour buses. It's part of the relationship between bohemian culture and tourist industry that can be mutually beneficial if you are in opposition to the idea of building luxury apartments and restaurants. That kind of model is now much more outmoded, especially after the financial crisis, than the idea of preserving this art center that has all this history of Berlin modernity and is so popular with tourists.

SPIEGEL ONLINE: If sites like Tacheles are in danger, does it suggest that, over 20 years after the Wall fell, that Berlin is finally becoming more like a conventional city?

Boym: There is a difference between a normal city and a conventional city. If normalization is a process, it's OK. If it's a process that becomes conventional, that's a different issue. I think if Tacheles is redeveloped it would be one of those quasi-fake, simulated presentations of history. What's interesting about Berlin is that you actually have these sites that are like a birthmark, like the Topography of Terror. These are sites like open archaeologies that have this material relationship to history -- not a virtual relationship, not a reconstructed or simulated relationship. It's not a kind of new urbanism à la Disney's Celebration city that would recreate the Berlin Wall in 3D. So what's really important is the material preservation. It would be better if they just found somebody to invest in the infrastructure to preserve the space as it is. If it is redeveloped radically, then I no longer think it would be a counter-monument. In a way it would go against that unique Berlin identity. The city's open sites became a monument to the informal urban development during the time of transition.

SPIEGEL ONLINE: Is this style of "informal urban development" unique to Berlin?

Boym: No, it's also happening in different places as well. For instance, in New York there is this movement called No Longer Empty. As a result of the financial crisis, artists take over temporarily vacated places and inhabit them as art spaces but also reflect on the process of foreclosure and financial crisis. There's also a movement in ruined bars in Budapest, where again artists inhabit what I call "off-capitalist" spaces. They do it semi-officially. It's no longer a squat tradition. It's an attempt to find certain loopholes in the law or even negotiate with somebody depending on goodwill. The Berlin model now works in several other cities. Which is yet another reason to preserve Tacheles because it would be ironic if this model stopped existing in Berlin and yet continued elsewhere.

SPIEGEL ONLINE: Do you think that Berlin is at risk of losing this identity?

Boym: In the late 1990s, it was a city in search of an identity. And there was this constant slogan: "Berlin is in the process of becoming." I was hoping that it would never become a conventional city, as you say. What's striking to me is that ever since the late 1990s people thought that Tacheles could disappear any day, and it hasn't disappeared. So what seems to have been a very transitional structure is an almost foundational structure for that new Berlin. The city has "become" but it has not become a conventional city, and Berlin is defined as much now by Potsdamer Platz, as the watchtowers and Tacheles. The Potsdamer Platz model did not become the single model of urban development in Berlin. (Editor's note: Berlin's Potsdamer Platz square was an urban wasteland during the Cold War but was redeveloped after the fall of the Berlin Wall. It is now home to entertainment and shopping complexes as well as residential buildings.) The city has multiple models of urban development and multiple mechanisms of forming urban identity.

SPIEGEL ONLINE: Prominent architects who have been involved in rebuilding Berlin have described it as an "anti-city" because it has no true center and it is too spread out. What do you make of that assessment?

Boym: I would say, on the contrary, that it is the city par excellence. I think Berlin is a unique city, because it has these competing models, it has youth culture, it has artistic culture, it has amazing museums, it has slightly more affordable places to live, it has all kinds of festivals for art and so on. In terms of urban culture it is one of the top destinations in Europe. If we call Berlin an anti-city, we presume that urban development is one thing and moves in a certain direction, for example, one model of gentrification. What I see as urban is a heterogeneous structure that allows for grassroots development and for alternative communities to coexist.