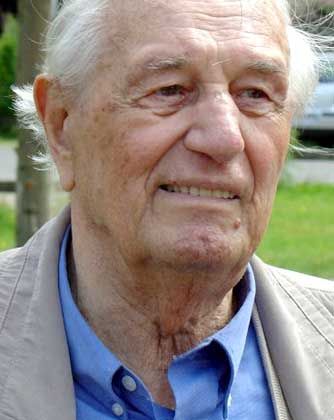 The strangest thing was the sight of the two guitar players at the "Kaiserhof" subway station in Berlin. "I come out of this bunker of death, all that drama, and someone's playing music," recalls Rochus Misch. "They played Hawaiian music!" It was May 2, 1945, at six o'clock in the morning.

Near Hitler's bunker, French SS troops and German army units were prolonging the end of World War Two. Misch was desperate to get out of this hell. Alive.

An hour earlier, Misch, 27 years old at the time, had ended his duties in Hitler's bunker beneath the Chancellery. He asked Joseph Goebbels, Hitler's Propaganda Minister and newly-appointed Reich Chancellor, if there was anything left to do. "Herr Reich Chancellor, I'd like to leave with the rest of the comrades," he says.

At that point the Red Army was 200 meters, or 656 feet, away from what had been Misch's place of work for the last six years. Misch was Adolf Hitler's bodyguard and telephone operator  one of the last people to leave the bunker. He survived them all. He is the last witness.

Nowadays, Misch lives in an apartment in Berlin. This part of the city is more like a village. The neighbors know each other and say hello. It's a quiet part of the world - except for Misch's apartment. He complains that his phone won't stop ringing, and the letters are piling up on his table once again. He even gets letters from Japan, Spain and the United States. Some contain cash and requests for his autograph. Recently he had to order another set of photos of himself. He signs them and sends them on. The photos show Misch in his uniform, in front of two bunkers, 65 years ago. The war won't leave Misch in peace.

Born in 1917 in what is now the Polish town of Opole, Rochus Misch lost both his parents when he was two. He grew up with his grandparents and got a job painting advertising posters. In 1937 he joined a unit that later became Hitler's SS protection unit. He was seriously wounded in Poland while negotiating the surrender of a Polish position. After that his "soldier's fate", as Misch calls it, began.

During his convalescence his company commander recommended him for Hitler's personal staff. He was to be spared a return to the front because he was the last surviving member of a German family.

He was put in a car and driven to the "Führer apartment" in the Reich Chancellery in Berlin, he recalls.

"I was afraid. Don't make me meet the Führer," he remembered thinking. "The Führer was 'the Führer' to me, like he was to all Germans."

The first time he was introduced to Hitler, a cold chill ran down his spine. Hitler handed him a letter for his sister in Vienna. "That was the first meeting. He wasn't a monster, he wasn't an Übermensch, he stood opposite me like a perfectly normal gentleman, and spoke kind words," says Misch.

Misch knows many such moments, and he has been talking about them for years. He often gives the same quotes, as is evident if one compares the interviews he's given. He talks about them to Japanese tourists who appear on his doorstep unannounced, and to the journalists of local and international newspapers. Former Chancellor Willy Brandt once visited him, he recalls, as did many filmmakers. But Misch never talks about the last secret surrounding the final days in the bunker.

Every minute of those last days is on record -- everything except for who shot Hermann Fegelein, the SS general married to Eva Braun's sister. Fegelein was Heinrich Himmler's liaison officer with Hitler and left the bunker without permission on April 27. Arrested in his Berlin apartment, the SS general was executed on April 29. Misch says he knows who pulled the trigger, but won't reveal his identity, even though he is dead. He says Hitler didn't have Fegelein shot, contrary to a claim by the late historian Joachim Fest. He only demoted him.

Eva Sat Dead on the Sofa

Misch prefers to talk about Hanna Reitsch, the pilot who wanted to fly the Goebbels' six children out of Berlin. He says Goebbels wanted to rescue the children but that his wife Magda had them all killed out of loyalty to Hitler. After they had been killed, she played cards.

He recalls seeing Eva Braun sitting dead in the corner of the sofa, her head turned to Hitler, "her knees pulled up to her chest, she had a dark blue dress on and a white frill on her collar."

In the early hours of May 2, 1945, Misch's job was done. Goebbels dismissed him with the words: "We knew how to live, we will also know how to die." Misch destroyed the telephone system and left the bunker through a cellar window.

Before that he had said farewell to the technician Johannes Hentschel, who stayed because he wanted to maintain the water and electrical supply to the bunker's hospital.

Misch was captured at what is today Berlin's Nordbahnof train station. Among the other prisoners was Hitler's personal pilot Hans Baur, who was seriously wounded. Misch looked after Baur, but Baur told his Russian interrogators where Misch had worked. So Misch was taken to Moscow, where he was questioned and tortured. It got so bad he sent a letter to Lavrentiy Beria, the head of the NKVD security service, asking to be executed. After eight years in prison camps in Kazakhstan and the Urals he was able to return to Berlin in 1953. He settled in West Berlin and took over a friend's painting business. He worked there until he retired.

Misch has now written a book about his experiences during the Nazi era. It has already been published in South America, Japan, Spain, Poland and Turkey. It is due to be published in Germany this Autumn. It's called: "I was Hitler's Bodyguard."