With Chancellor Angela Merkel entering her fourth, and likely final, term in office, there has been much speculation as to who might succeed her as head of the Christian Democratic Union (CDU). There are plenty in the party who would like to see the CDU return to its conservative roots after years of steering toward the political center under Merkel's leadership. Merkel, though, wants to protect her legacy. As such, her nomination of Annegret Kramp-Karrenbauer for the position of CDU general secretary - a position to which she was officially elected on Monday - has led many pundits in Germany to conclude that Merkel has made her decision.

Kramp-Karrenbauer is the governor of the tiny western German state of Saarland and is widely thought to hold similar political views to the chancellor. There had been speculation that Merkel would name Kramp-Karrenbauer to her new cabinet, but instead, the 55-year-old will be in charge of revamping the party's aging platform.

DER SPIEGEL: Ms. Kramp-Karrenbauer, Alexander Dobrindt of the Christian Social Union (CSU) says that a party's general secretary is like the synchronized swimming partner to the party leader. Will that be true of your relationship with Chancellor Angela Merkel?

Kramp-Karrenbauer: If there is a sport that I'm not particularly fond of, then it is synchronized swimming. Of course, there has to be a joint basis for understanding between the general secretary and party leader. But the party also needs its own profile.

DER SPIEGEL: In the past, one has had the feeling that the general secretary was primarily there to do the chancellor's bidding.

Kramp-Karrenbauer: I know from my tenure in Saarland just how great the danger is that the task of governing overshadows everything else. In the past several years, lots of unforeseen events have taken place: the financial crisis, the euro crisis, the refugee crisis. That placed the focus more squarely on the government and the party sometimes faded into the background. It will by my job to change that.

DER SPIEGEL: Your predecessors had little room to maneuver. Why do you think it will be any different for you?

Kramp-Karrenbauer: Because the challenges are different. We have a party platform from 2007, that was the year the first iPhone was released. If we want to adjust that platform to reflect current realities, that can only be done with the necessary room to maneuver. I am convinced that Angela Merkel also intends to give it to me, otherwise she wouldn't have given me this task.

DER SPIEGEL: In the campaign ahead of the state elections in Saarland last March, you said that if voters wanted you to be governor, they had to cast their ballot for your party, the Christian Democratic Union (CDU). Now, though, you are heading off to Berlin. Are you not violating the voters' trust?

Kramp-Karrenbauer: I completely understand if people are disappointed with my decision. I would love to have continued my work here. But I think that the stability of our political system is at stake at the moment. The big-tent parties are under immense pressure. The question is: In the future, will we, as other countries do, see political movements held together by a strong leader rather than policy content? I am convinced that our system of big-tent parties is superior.

DER SPIEGEL: Does your decision to become general secretary of the CDU have anything to do with the fact that, following coalition negotiations with the Social Democrats (SPD), your party doesn't have too many interesting minister posts to fill?

Kramp-Karrenbauer: No. I would have been interested in the Education Ministry, for example. That is also the policy area I oversaw during the negotiations with the SPD. But I think that the party needs to play a larger role. And of course it sends a message when someone chooses to move from a state office to a position within a political party.

DER SPIEGEL: How would you describe your personal relationship with Angela Merkel?

Kramp-Karrenbauer: We have a good, balanced relationship. Trust and respect, which has developed over the course of the last several years. Neither of us is known for explosions of emotion. We are interested in results and in consensus.

DER SPIEGEL: You have frequently been referred to as "Mini-Merkel."

Kramp-Karrenbauer: I don't pay attention to such labels.

DER SPIEGEL: You are widely considered to be Merkel's preferred successor.

Kramp-Karrenbauer: It was predictable that this question would surface once I decided to go to Berlin. It is, of course, nonsense.

DER SPIEGEL: Where do you differ from Merkel politically?

Kramp-Karrenbauer: We have different backgrounds and socializations. I am from a different part of the party, the classic Catholic CDU from the Rhineland.

DER SPIEGEL: Prior to you, there have been many successful state governors who have stumbled on the national political stage. Are you concerned that the same thing could happen to you?

Kramp-Karrenbauer: I thought about that for a long time, because I am, of course, extremely aware of the dangers. There is a different climate in Berlin. But I like challenges. My life won't be ruined if I don't achieve all of my political goals.

DER SPIEGEL: What are those goals?

Kramp-Karrenbauer: My greatest goal is that in the next federal election - whenever it might be and no matter who our candidate is - the CDU will achieve a result allowing it to form a government.

DER SPIEGEL: In the last election, in September, the CDU achieved an historically poor result and for the first time, the party is facing a challenge from the right, in the form of the right-wing populist Alternative for Germany (AfD). What happened?

Kramp-Karrenbauer: All big-tent parties reflect what is happening in society, namely the fact that we are continuing to individualize. The question as to what holds us together is becoming increasingly difficult to answer. In the 1960s, the Catholics voted for the CDU and the workers voted for the SPD, but these old certainties no longer apply. That is why the parties have to be even more convincing with their answers to present-day problems.

DER SPIEGEL: The situation was no different in 2013, when conservatives received over 40 percent of the vote nationwide. Something went wrong after that.

Kramp-Karrenbauer: Of course, refugee policies more than anything shattered certain fundamental convictions in our society. In such situations, voters erupt with emotions that have been accumulating for a long time.

DER SPIEGEL: That sounds rather general. What concrete mistakes did the conservatives make?

Kramp-Karrenbauer: I don't want to call them mistakes, because the refugee crisis was an unprecedented situation that was an enormous challenge for all of us. But now we have to fundamentally clarify what integration and identity mean in our country. It wasn't just new year's eve in Cologne that destroyed enormous amounts of trust (Eds. Note: The reference is to the hundreds of incidents of sexual assault largely perpetrated by migrants from North Africa on New Year's Eve 2015). Voters are also furious that people coming here for protection and aid have lied about their ages and countries of origin. That doesn't, however, mean that we should take part in a contest to see who can find the most strident responses to these problems.

DER SPIEGEL: You don't believe your party has made any mistakes?

Kramp-Karrenbauer: If I were to identify one large mistake made in recent years, it would be that the CDU and the CSU (Eds: the Christian Social Union, the CDU's Bavarian sister party) were obviously unable to find a joint position on the issue of refugees. It was only after the election that were we able to squeeze out a compromise.

DER SPIEGEL: Do you share the belief that Angela Merkel has quashed any real political debate within the CDU?

Kramp-Karrenbauer: I am convinced that we have arrived at a time when more discussion in the party is necessary. The CDU made many past decisions in the heat of the moment, subject to the normative power of the conditions at hand. I would like to see more lively debates such as the one over the minimum wage or pre-implantation diagnostics - issues that have been debated for hours at past party conventions.

DER SPIEGEL: Some in the CDU have warned against a rightward shift in the party. Do you believe such warnings are necessary?

Kramp-Karrenbauer: I think it is necessary for us to make clear once again what the bedrock of our party is, namely the Christian view of humanity. The CDU was a party that united different denominational and ideological currents. If the idea of a rightward shift means that we ignore those roots and only define ourselves as a conservative party, then I am strictly opposed.

DER SPIEGEL: Critics of the party's current direction are more concerned that the CDU's conservative roots have been neglected and that they should be strengthened once again.

Kramp-Karrenbauer: I think such blanket statements about us having neglected our conservative roots are wrong. As I said, we have had intense debates about the protection of embryos. We have also made many changes when it comes to domestic security, and that includes the standards we developed together with the CSU and which have now become part of the coalition agreement. Those are important conservative issues.

DER SPIEGEL: Might the problem be a different one? Angela Merkel has been chancellor for 12 years and will likely stay in office for another four. Is it accurate to say that, after a certain amount of time in a specific position, politicians are used up?

Kramp-Karrenbauer: That is certainly a danger, and it is perhaps a greater danger today than it used to be because of media developments. Angela Merkel is fully aware of that. That is the reason, after all, why she hesitated ahead of the last election and thought for so long about whether she should run again or not. Nevertheless, she has just shown once again that she is still able to surprise the party.

The article you are reading originally appeared in German in issue 9/2018 (February 24th, 2018) of DER SPIEGEL.

DER SPIEGEL: The platform renewal that you aspire to is to prepare the CDU for the post-Merkel era. Is that not a bit delicate with her still in office?

Kramp-Karrenbauer: There will certainly be times when Merkel and I will have opposing viewpoints. Just the fact that government work adheres to a different set of prerogatives than a party does makes conflicts unavoidable. We are both aware of that and we will speak openly about them.

DER SPIEGEL: Generally, one becomes the general secretary of a party to prepare for other positions in the future. What positions do you have your eye on?

Kramp-Karrenbauer: I am 55 years old. I have already achieved quite a bit in my political career. I don't need to climb further. That is an extremely liberating feeling.

DER SPIEGEL: Then let's ask a rather more abstract question. Has the CDU come far enough that after 18 years with a female leader, it is ready to accept another woman as her successor?

Kramp-Karrenbauer: The CDU has come far enough that, at some point in the future when it comes time to choose a successor to Angela Merkel, it will choose the person it believes is capable, regardless of gender.

DER SPIEGEL: Ms. Kramp-Karrenbauer, thank you very much for this interview. 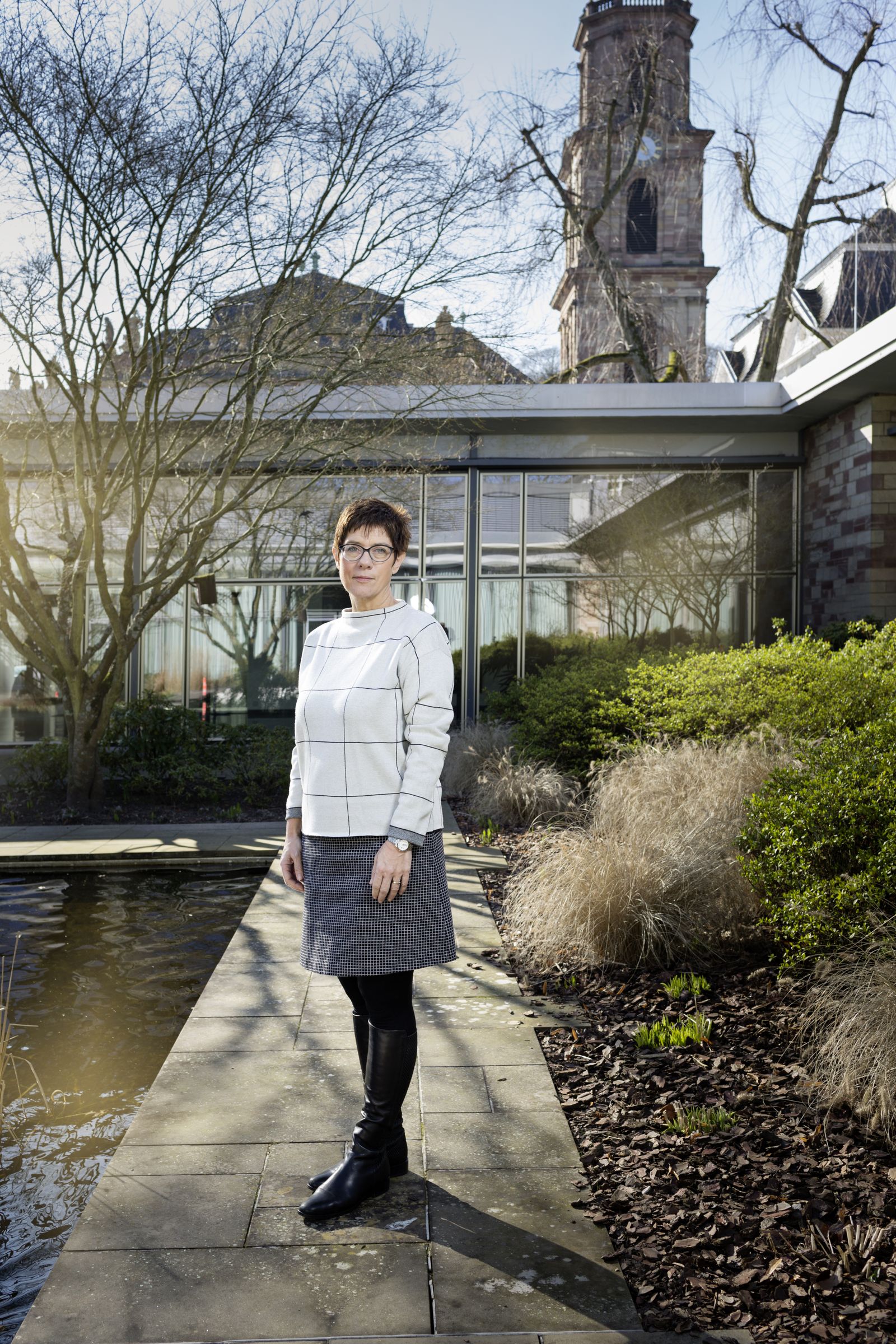 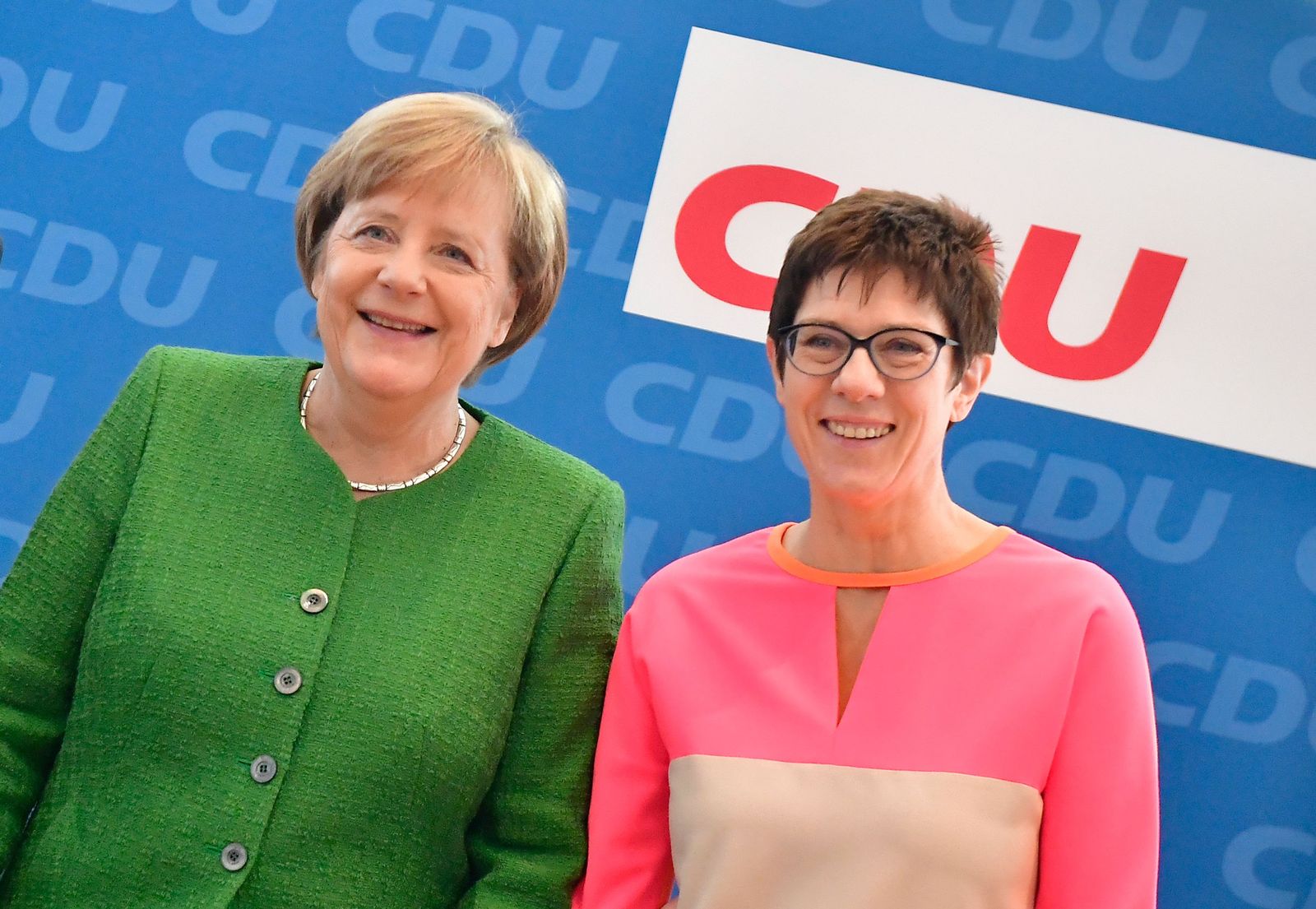