SPIEGEL: Minister Schäuble, following his inauguration as the new president of France, Emmanuel Macron will visit Berlin next week to present his plan for a renewal of German-French relations. Does the German government now have a powerful new ally in Europe? Or a new adversary?

Schäuble: Macron wants a stronger Europe, just as the chancellor and I do. I was impressed that the new president climbed onto the stage in front of the Louvre to the sound of the European anthem after his election victory. That was a very powerful symbol. It is very clear: Macron is our ally.

SPIEGEL: But Macron also wants Europe and Germany to change. Above all, he is demanding that the German government make more money available for Europe. Will you accommodate him?

Schäuble: First, Macron wants to see changes in France and we support him in that. Macron has proven his courage by leading an election campaign friendly to Europe and reform against the majority opinion of the Socialist Party. Now Macron must see to it that he is able to get a majority in the National Assembly for his plans to reform the labor market. We are all wishing him success with that.

SPIEGEL: For Martin Schulz, the chancellor candidate for the center-left Social Democrats, friendly wishes don't go far enough. He would like to see much more enthusiastic support for Macron than that shown by Chancellor Angela Merkel, whose comments so far have tended to be reserved. As she put it, she doesn't see a need to change her policies because of Macron.

Schäuble: If we want to make Europe stronger, then each country first has to ensure that it becomes stronger itself. This applies to Italy and France, and it applies to Germany as well. Subsequently, we in Europe need to discuss how we can improve the community. That is the correct order. Incidentally, one should not misappropriate a French president in a transparent election campaign maneuver. Doing so does not do any favors to German-French relations. The German chancellor has provided the correct response, one that is characterized by respect and reserve.

SPIEGEL: Foreign Minister Sigmar Gabriel, likewise of the SPD, has accused you of being too reserved when it comes to plans for a broad European investment program.

Schäuble: The new foreign minister appears to have more ideas now for stimulating investment demand than he did during his time as economics minister. He doesn't appear to have made much progress on the issue (in his previous role). If there are possibilities for strengthening investments, they will not fail because of us. Macron is right when he says that we need to do more and talk less.

SPIEGEL: One of the main things Macron is talking about at the moment are the surpluses in the German trade balance. He considers them to be "unacceptable" and, as U.S. President Donald Trump or international organizations like the International Monetary Fund (IMF) have done, is saying they have to be reduced. Will you yield to his demand?

Schäuble: I will ask Macron, just as I have the IMF, what exactly he expects me to do. The IMF has long said we need to increase our public investment. We have since done so much that we are not even able to spend the large sums of money.

SPIEGEL: People are getting worked up for no reason?

Schäuble: It is correct to say that Germany's current accounts surplus, which is slightly over 8 percent of gross domestic product, is too high. It will sink in the years to come, that's already apparent and it is a good thing. Only: Those who criticize us need to ask what the reasons are for the strength in exports.

SPIEGEL: What are they?

Schäuble: There are no political roots behind the surplus. It is the product of the high level of competitiveness in the Germany economy, but it is also due to the fact that we are part of a currency union. The president of the European Central Bank has decided on a low-interest policy and is given much international praise for it, from the IMF right up to Macron. But a byproduct of this is that the exchange rate for the euro has fallen, making German products on the global market even cheaper and thus more attractive. Without the euro, Germany's surpluses would likely only be half as high as they are.

SPIEGEL: Others are to blame, in other words, and there is nothing the German government can do.

Schäuble: Of course there is, but there too it is worth looking for the true causes. In order to limit the trade surplus, we in Germany could, for example, lower taxes. And who is against that? The Social Democrats (Editor's Note: The SPD is Merkel's junior coalition partner). We could also mobilize more private investments for public infrastructure projects like the construction of highways. But the Social Democrats also reject this, even though they are at times similar to others abroad in their carping about the surplus. Incidentally, some of the consequences of the good economic situation are strong increases in wages, rising pensions and a strong labor market.

SPIEGEL: That's why Macron is demanding that Germany should steer part of its surpluses to Southern Europe. Germany must recognize, he says, that Europe and the common currency cannot survive without becoming a transfer union. Is he right?

Schäuble: You cannot form a community of countries of different strength without a certain amount of equilibrium. That is reflected in, for example, the EU budget and the bailout programs. That is why there are net payers and net recipients in Europe. A community cannot exist if the stronger do not take responsibility for the weaker. How far one goes with those transfers and the amount that is to be redistributed is something that voters must decide in a democracy.

SPIEGEL: That's why the new president would like to strengthen the European institutions and, for example, institute a European finance minister. What do you think of that?

Schäuble: A lot - I actually once brought this up. But a European finance minister would also have to have the powers of a finance minister. Otherwise the whole thing doesn't make any sense.

SPIEGEL: What powers are you referring to?

Schäuble: He or she would need, for example, a budget. The chancellor has even brought up this possibility before. And the person would of course also have to be able to enforce European budget rules so that they are adhered to by all. Such a sweeping change, however, would also require amending the European treaties. There are not many people in Europe right now who consider that to be realistic.

SPIEGEL: What, then, can Europe do to further integrate?

Schäuble: I support pursuing every realistic step in joint initiatives in Europe. We need to lead the investment initiative to success and to implement the digital and energy union and push forward the defense union.

Schäuble: I support it. But there would also have to be a preparedness to jointly plan and carry out the associated procurement projects. I could also imagine further developing the European Stability Mechanism (ESM, the euro backstop fund) that we founded for the euro crisis countries.

SPIEGEL: Will you be forgiving if France fails to meet the provisions of the Stability Pact again in the future?

Schäuble: First of all, I have confidence that the new French president will hold to his pledge to reduce new borrowing. France should be able to manage that - after all, it is not far off the 3-percent mark.

SPIEGEL: And if it doesn't?

Schäuble: Then it is not my job to be forgiving. Interpreting budget rules is the job of the European Commission. It oversees the Stability Pact and has significant leeway, which it has frequently used in the past years.

SPIEGEL: You have also at times sharply criticized the Brussels authority for doing so.

Schäuble: What makes you think that? The German federal government and I have never contradicted a recommendation from the Commission on how to judge the deficits of countries like France.

SPIEGEL: Yet you are held responsible all across Europe for the rigid austerity course. Are you disputing that you insist on strict adherence to European budgetary rules?

Schäuble: Treaties exist so that they will be adhered to. It only serves to strengthen euroskepticism when we constantly make promises and reach agreements that we do not adhere to.

SPIEGEL: That makes it sound as though you would like to serve as finance minister again in the next legislative period in order to negotiate a reform of the currency union together with France.

Schäuble: Macron will negotiate with the chancellor, not with the finance minister. And as for me, I will do everything I can to ensure that Angela Merkel remains chancellor.

SPIEGEL: Mr. Schäuble, we thank you for this interview. 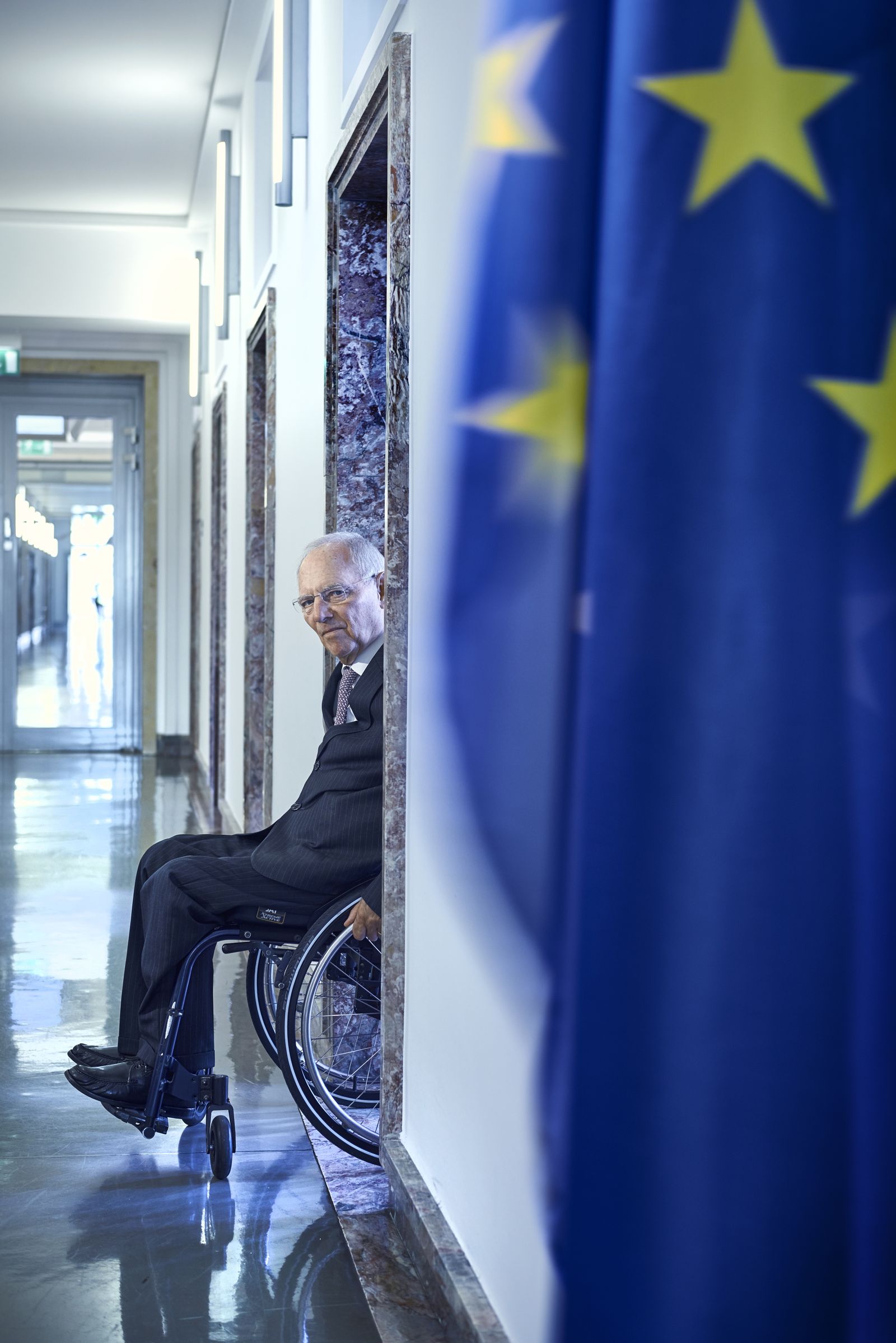