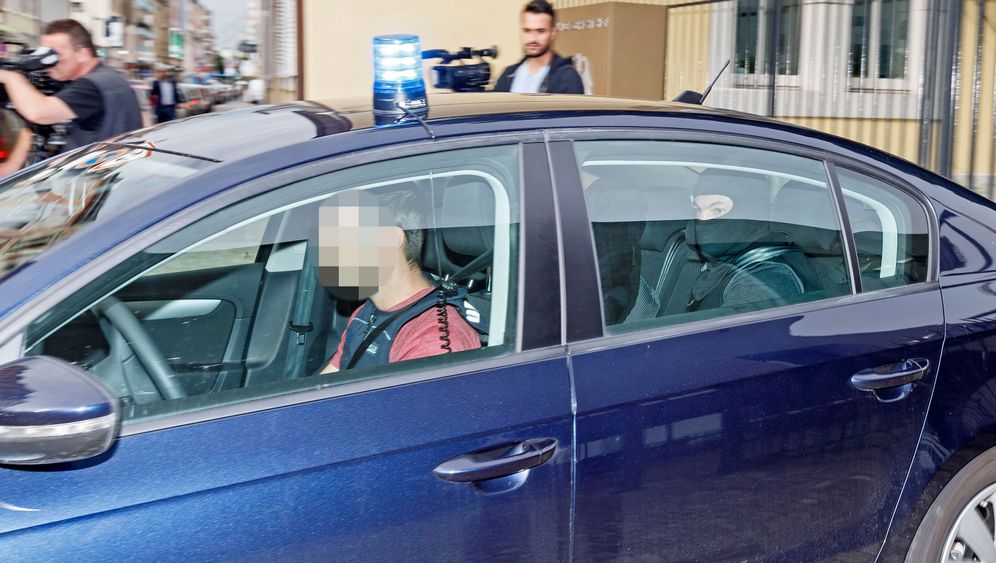 Photo Gallery: A Possible IS Plot in Germany

A man with short black hair and dark complexion walked into the police station at Rue de Clignancourt at 9:30 am on February 1. He spoke better Arabic than French, but the officers didn't find that to be particularly unusual. The station is located only a few hundred meters from the Sacre-Coeur Basilica in Paris and many people from North Africa or the Middle East live in the area.

The testimony of the 25-year-old, however, did surprise the policemen. Saleh A. claimed to be the head of an Islamic State (IS) terrorist cell and said he wanted to turn himself in. He also claimed to have important information about a planned attack in Germany.

The police officers were perplexed. A presumed terrorist giving himself up? One who apparently lived incognito as a refugee in Germany, planned to carry out an attack there and was approaching the authorities in Paris? German officials were quickly informed.

German investigators and intelligence operatives were also taken aback -- and initially suspected that it was just one of the many crazy stories they hear every day about attacks that had allegedly been planned. Like the one allegedly targeting an international football match in Hanover, which was then cancelled, or the attack purportedly scheduled for New Year's Eve in Munich. None of the rumors, though, had turned out to be true.

Four months later, after 12 interrogations undertaken by the French police and a four-hour questioning by German officers, the authorities struck in Germany. On June 2, investigators arrested three suspected accomplices of Saleh A. in the German states of Baden-Württemberg and Rhineland-Palatinate. Federal Prosecutor General Peter Frank suspects them of having planned a bloody attack on the Düsseldorf old town that was to involve a total of 10 attackers. Two, the prosecutor general said, were to have blown themselves up while the others were to kill passersby with assault weapons and explosives.

Should the evidence become more concrete, it would provide clear proof that IS does indeed have Germany in its sights. It would prove that IS has disguised attackers as refugees and sent them to Europe via the Balkan Route. And it would demonstrate that the Islamist group was able to plant sleeper cells.

From One Crisis Region to the Next

But how reliable are such assumptions? Months of back-and-forth between German and French officials took place between Saleh A.'s appearance at the police station in the 18th Arrondissement in Paris and the arrests in Germany. Thus far, the findings are almost entirely reliant on the testimony provided by the 25-year-old witness.

Reporting undertaken by SPIEGEL in France and Germany now provide some insight into the lives and plans of the suspected terror cell. If you believe Saleh A., he was born in Sudan as the son of a man from Raqqa in Syria. His family moved from one crisis region to the next, from Sudan to Yemen, from there to the Gaza Strip and then to his father's hometown of Raqqa. The moves apparently had to do with his father's job, but it is unclear what his profession was.

Saleh A. says that he learned to handle assault rifles and pistols as a child. He claims that in 2009, the regime of Syrian dictator Bashar Assad threw him in prison for insulting the president.

When he was released in 2011, the world outside had changed dramatically, with the uprising against Assad having begun. Saleh A. joined the Free Syrian Army to fight against the regime, but in 2012 he switched to the fundamentalist Nusra Front.

It is there, he says that he got to know the first of his accomplices: Abd Arahman al-K., who Saleh A. says was responsible for producing suicide belts for Nusra.

In 2013, Saleh A.'s unit defected from the Nusra Front to Islamic State, he claims. He says he wasn't in favor of the switch, whereupon he was shot and then locked up in an IS re-education camp. While there, he met Hamza C., the next presumed co-conspirator. Ultimately, he swore allegiance to the IS governor of Raqqa in January 2014 and was released.

Saleh A. says he was commissioned to commit an attack in Germany by his brother-in-law, allegedly a senior figure in the "External Operations" division of IS. The target -- Heinrich-Heine-Allee street in the old town of Düsseldorf -- was identified, he claims, by the confidant of his brother-in-law: an IS member with the nom de guerre Abu Haret, a Tunisian who had lived for a time in Düsseldorf.

If Saleh A.'s story is true, there were originally four people who were to take part in the attack: Hamza C. and Saleh A., who first moved to Turkey and worked there as migrant smugglers before they made their ways separately to Germany in March and July of 2015. The third was Abd Arahman al-K., the bomb builder, who came to Germany in October 2014 as a refugee. A further co-conspirator allegedly drowned in the Aegean Sea.

In Germany, Saleh A. explained, they followed IS instructions. Hamza C. traveled to Berlin while Saleh A. registered at an initial reception facility in Dortmund -- apparently so he could prove to IS that he had reached his destination.

From that point on, he behaved unobtrusively, consistent with his instructions. Saleh A. discretely established contact with Abd Arahman al-K. in Leimen, a town near Heidelberg. He and Hamza are thought to have jointly recruited an additional presumed terrorist: Mahood B., an apparently easily influenced Syrian refugee with a drug problem.

But how far along were the alleged terror plans? The police searches carried out in early June turned up neither weapons nor explosives. And residents of the refugee hostels where the alleged terrorists lived told SPIEGEL that they saw no cause for concern in recent months.

Saleh A. lived together with seven men in room number 7 of a refugee hostel in the town of Kaarst, near Düsseldorf. His roommates took note of the fact that he often wasn't there. They saw that he consumed significant quantities of marijuana and that days when he didn't smoke were difficult for him. "He would get aggressive and loud. He screamed and banged his head against the wall," says one asylum applicant.

Otherwise, they say, Saleh A. was friendly, cooked well and was willing to help. He was also courageous, they say, reporting that he had escorted a group of 30 refugees from Greece to Germany. The hostel residents also say that he missed his family, particularly his youngest daughter, who was only three or four years old.

A Refugee Who Had Lost His Bearings

Furthermore, Saleh A. showed the hostel resident his Dutch residence permit, because he had also applied for asylum in the Netherlands. He believes that Saleh A. had done so in order to double the amount of state help he was receiving, but Saleh A. told investigators he had become frustrated with the slow pace of the asylum application process in Germany. Bureaucracy and the buying of drugs were both easier in the Netherlands, he said.

Investigators don't believe him. After all, in France Saleh A. spoke of an alleged IS sleeper cell in Holland, though he claimed not to know anything more about it.

Saleh A. had never attracted the attention of German authorities as an Islamist in the past. At the most, he gave the impression of a refugee who had lost his bearings. He did, though, have a police record, the result of a theft and because he allegedly bit a man's finger at a disco.

The other three suspects behaved inconspicuously. Asylum-seekers who lived together with Mahood B. in Mülheim an der Ruhr say he only had harmless books about Islam. Aside from that, they report that he had a girlfriend from Africa and then, later, a relationship with a beautiful woman from Croatia. When the police arrived, those living in the hostel with him initially thought it was due to his drug consumption. "When I heard the term sleeper cell, I first thought: Yeah, he did actually sleep the whole day," a former roommate of Mahood B.'s jokes.

Abd Arahman al-K. likewise didn't attract much attention. One day, Syrian neighbors joked with him that there could be problems because he was from the IS stronghold of Raqqa. Al-K.'s response, they say, was: "I escaped the war just like you did."

The Düsseldorf police task force charged with investigating the alleged terror cell over the past several months included 30 officers along with police in other German states. They listened in on the telephones of the three suspected conspirators and monitored their movements at great effort.

They found no proof that Saleh A.'s story was true. But there were some clues. In monitored conversations, the men asked each other where Saleh might be. When their phone conversations veered toward a critical topic, they broke off. One of the men complained on the phone that he wasn't allowed to go to prayers because otherwise he might attract attention. One could potentially interpret that as conspiratorial behavior.

At the same time, indications emerged that the men had possible links to terrorist organizations. US intelligence officials are apparently convinced that Abd Arahman al-K. fought and killed for the Nusra Front in Syria.

The strongest indication turned up by investigators thus far, beyond the YouTube videos of Saleh A. in combat gear, is likely a Facebook chat between him and Abd Arahman al-K. from January 2016. In the chat, Saleh A. asks: "What's wrong with you brother, just jihad all the time?" He continued: "We have to watch the game in calm. We just have to be patient." Then, he went on, they have to decide which flag they want to represent. Abd Arahman al-K. responded: "If we're going to fight, we have to know if we're going to die as martyrs or not."

SPIEGEL reporting from Raqqa found that Saleh A. and other members of his family were active there for Islamic State. Those who know him are apparently quite surprised that he turned himself in to the authorities in Europe. He has deep roots in IS, they say.

German investigators consider Saleh A.'s story to be credible. Now, they are hoping for more clues from the analysis of the mobile phones found during the arrests of his suspected co-conspirators.

More than anything, though, they are waiting impatiently for the witness to be extradited to Germany. He has ceased speaking to investigators in Paris and says he will only continue talking once he has been transferred to Germany. His alleged accomplices have thus far refused to talk. Two weeks ago, they appeared relaxed during an appearance before an arraignment judge in Karlsruhe.

It remains uncertain whether charges will be filed. It is possible that the evidence thus far gathered is insufficient for a conviction.

And if suspicions become more concrete? "This is one of the few cases that I would rather not have to prosecute in the end," the prosecutor responsible for the case said last week during a confidential session of the Internal Affairs Committee in German parliament. He would rather expose Saleh A. as a liar than find proof that plans had been laid for a horrific attack in Germany.