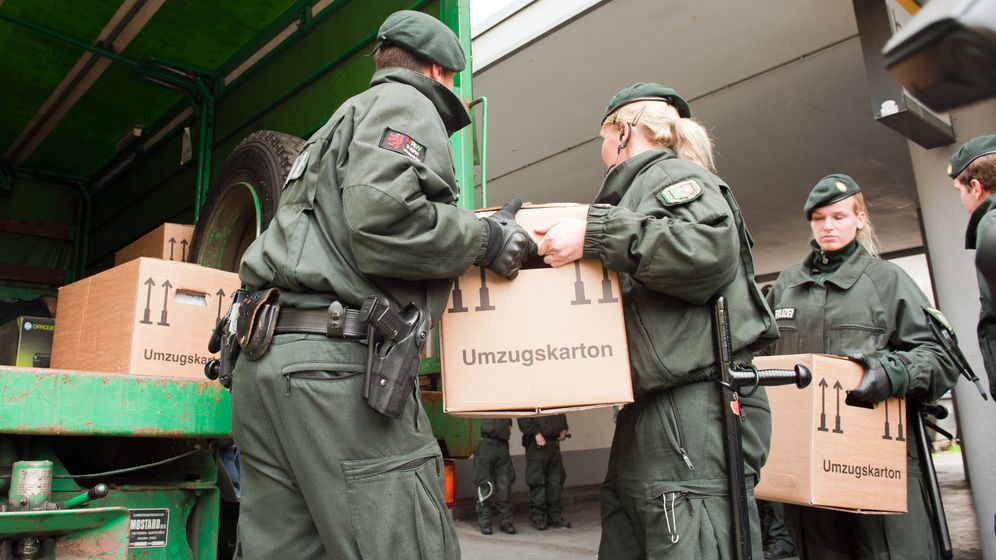 Photo Gallery: Taking on the Salafists

Following police raids of Salafist groups on Wednesday in the German state of North-Rhine Westphalia, in addition to the foiling of an apparent Salafist plot to attack senior members of the regional, right-wing populist party Pro-NRW, German conservatives are demanding further action against the Islamist extremists.

Wolfgang Bosbach, a senior member of Chancellor Angela Merkel's Christian Democrats (CDU) and the party's domestic policy expert in parliament, would like to make it easier to deport religious extremists. "It is incomprehensible why the deportation law applies only to politically motivated perpetrators of violence and not for religiously motivated fanatics," he said in an interview with the daily Neue Osnabrücker Zeitung, published on Thursday.

Because many of the Salafists in question are also German citizens, he also demanded that more be done to investigate and, where necessary, prosecute extremists.

The call came a day after police arrested four Islamists who were allegedly planning an attack on Markus Beisicht, head of Pro-NRW, in Leverkusen. Two of those taken into custody were seized near Beisicht's home, where they were apparently performing reconnaissance in preparation for an assault. A third was arrested in Bonn, where police also found a firearm and explosive material. The fourth suspect was arrested in Essen. Three of the suspects hold German passports while the fourth is Albanian, according to the public prosecutor's office in Dortmund.

In addition to the weapons, police also found a list with eight Pro-NRW members' names marked in red, including that of Beisicht. Chief investigator Rainer Pannenbäcker refused to say if police suspected that attacks against the others on the list were imminent. But Beisicht himself said in a brief appearance before supporters on Wednesday evening that all of those on the list had been informed and placed under police protection.

In a video of that event, Beisicht seems noticeably shaken, but also pugnacious. "It is not a nice situation, certainly, to have police parked in front of your house," he said, before adding: "This shows that they are much worse than we have been presenting them. We will never capitulate to the enemies of freedom."

Beisicht became notorious in Germany last year whenPro-NRW launched an Islam caricature contest and then displayed the "winners" in front of Muslim facilities ahead of state elections last May. The events erupted into violence on two occasions, partially the result of Salafists from across Germany travelling to the region to stage counterdemonstrations. At an event in Bonn on May 5, rioting between Salafists and the police on hand to protect Pro-NRW demonstrators resulted in injuries to 29 officers. Two of them landed in the hospital with severe stab wounds.

Since then, threats against Pro-NRW from the Islamist scene have become commonplace. Not long after last May's violence, a video produced by an Islamist in the border region between Afghanistan and Pakistan called on Muslims to hunt down and kill Pro-NRW members.

"For the most part, though, the threats have been abstract," Pro-NRW spokesman Markus Wiener, who says his name, too, is on the list found on Wednesday, told SPIEGEL ONLINE. "But this is a new dimension, with weapons and explosives. We are shocked, clearly," he said. "But we will keep fighting."

News of the foiled attack on Pro-NRW broke immediately after police raided some 20 apartments belonging to members of Salafist groups as well as a group meeting place in both North Rhine-Westphalia and the state of Hesse. While no arrests were made, officers confiscated laptops, telephones, propaganda material and a small amount of cash. In addition, German Interior Minister Hans-Peter Friedrich banned three Salafist groups. The raids were unconnected to the Pro-NRW plot, officials said.

One of the groups, DawaFFM, was targeted due to its "use of hate-filled propaganda and violence-oriented agitation" to target values anchored in the German constitution. Another group was banned partially due to suspicions that it was collecting money for Islamist groups operating in Syria.

In his comments to the Neue Osnabrücker Zeitung, Bosbach said that the bans were "a step in the fight against Salfism." But, he added, "bans do not make radical ideology disappear."