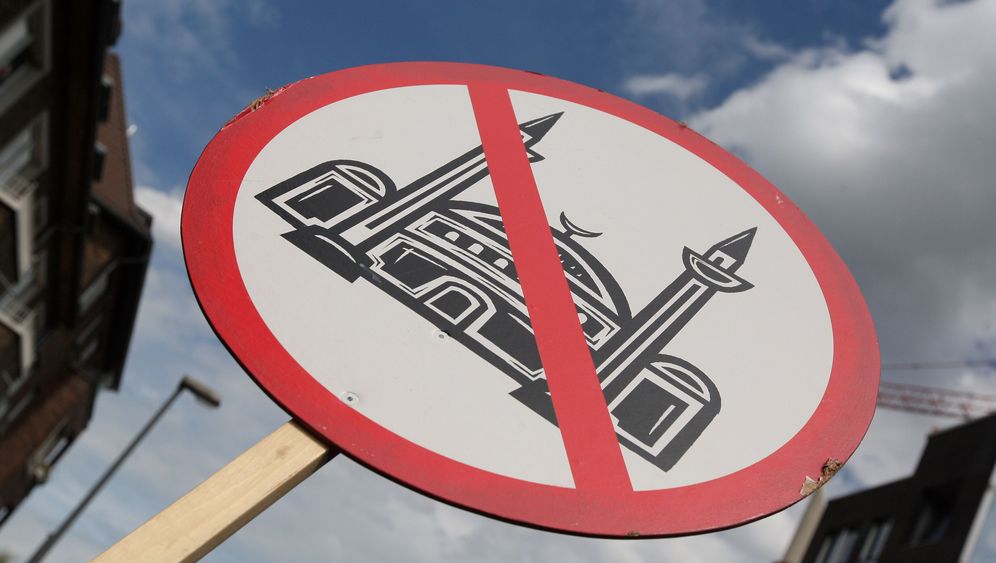 Stachus is one of Munich's nicest squares. It is rich in tradition and filled with pedestrians -- and perfect for Michael Stürzenberger's purposes. Hand balled into a fist, he paces back and forth and screams, "The Koran is the most dangerous book in the world." Because a couple dozen people have come to demonstrate against Stürzenberger, police officers in bullet-proof vests are watching over the area.

A decade ago, Stürzenberger, 49, was the spokesperson for the Munich office of the Christian Social Union (CSU), the Bavarian sister party of Chancellor Angela Merkel's Christian Democratic Union. But since 2012 he has been active in a splinter party called Die Freiheit ("The Freedom"), of which he was elected federal chairman three months ago. He preaches hate against Islam and compares the Koran to Hitler's "Mein Kampf." For two years now, he's been collecting signatures opposing the planned construction of an Islamic center in Munich. He has already held over one hundred anti-Islam rallies.

The Freiheit leader isn't alone. Several supporters, have joined him on Stachus, some carrying signs such as "No mosque on Stachus," or "Stop the enemies of democracy." Stürzenberger screams that Sharia instructs men to hit women. His voice cracks. "We don't want that in Bavaria!" A retiree asks where he can sign "against Islam."

For most Munich residents, Stürzenberger's verbal assaults are an embarrassment. CSU city councilwoman Marian Hoffman compares his incitements to the "droning speeches of the Nazis." The city government of Mayor Christian Ude, a member of the center-left Social Democrats, is worried about possible conflict during the upcoming local elections. Munich, he says, has become the focus of "experimentation" by radical anti-Islamists with the right-wing populists from Die Freiheit testing whether or not their attacks on the Muslim minority have majority appeal. If Stürzenberger gathers enough signatures for a citizens' initiative against the mosque, it would send a signal across Bavaria and beyond that Muslims are not welcome.

There have been plenty of movements such as Stürzenberger's in Germany in recent years. They generally begin in response to the construction of a mosque: Reluctance turns into resistance, then hate and violence. Over the last two years, there have been arson attacks against Muslim prayer houses in Berlin, Hanau and Hannover. Politically Incorrect, the most prominent German-speaking anti-Islam website, has up to 120,000 visitors per day.

In addition to Die Freiheit, radical anti-Islamists have founded the political party Pro Deutschland ("Pro Germany") and the citizens' movement Pax Europa. They are currently attempting to gain influence over the euro-skeptic Alternative for Germany Party (AfD) -- the former federal chairman of Die Freiheit has called for his followers to support the AfD in this May's European elections.

According to a study by the Friedrich Ebert Foundation, 56 percent of Germans consider Islam to be an "archaic religion, incapable of fitting into modern life" and many believe religious freedom for Muslims should be "substantially restricted."

There are several potential explanations for the rising skepticism of Islam in Germany. For one, many third-generation Muslim immigrants are living more strictly than their parents did, making them more conspicuous. Also, in some neighborhoods in large German cities, Muslim girls are afraid of going outside without wearing a headscarf. There have also been several reports in the German media recently of ethnic-German men converting to Islam, radicalizing and going to Pakistan for terror training. Just this past week, the Minister of the Interior warned that a total of 300 German Jihadists have left Germany to fight in Syria.

Hans-Georg Maassen, president of the Federal Office for the Protection of the Constitution (BfV), Germany's domestic intelligence agency, sees a "correlation" between the activities of the radical Salafists and far-right agitation.

There are about four million Muslims in Germany, almost half of which have a German passport. The BfV estimates that about 42,000 (or 1 percent) of them are fundamentalists and 1,000 are potentially violent.

Anti-Islamists generally don't differentiate between Sunnis, Shiites and Alevi, or between militant Islamists and peaceful believers. In their imagination, Islam isn't a religion but a political ideology that must be fought. Muslims are accused of trying to take over the world, undermining the sovereignty of democratic states, infiltrating their legal systems. The Politically Incorrect internet platform reads: "The spread of Islam means that our descendants -- and probably us too -- will live in an Islam-dominated social order oriented towards the Sharia and the Koran and no longer towards the constitution and human rights."

The website of the "Nürnberg 2.0" project shows wanted posters of supposed Muslim supporters -- judges, journalists, politicians -- who are to be brought to justice for the "Islamification of Germany" in the vein of "the Nuremberg War Crimes Trials of 1945."

In the summer of 2013, a video by a self-described "Anti Islam Faction" made the rounds via Politically Incorrect. It showed a Koran being burned on a tree stump followed by the appearance of three men in aluminum foil masks who then burn another Koran and address Muslims in a distorted voice: "You are the most fascist and hate-filled religion in existence." Then the video shows images of decapitations, blood-smeared fanatics, mutilated women's bodies and faces that have been eaten away. It ends with the words: "Don't give Islam a chance!" The Munich State Prosecutor has begun proceedings against the video's creators.

Politically Incorrect (PI for short) was founded by Stefan Herre, a teacher from Cologne. Herre's influence stretches beyond the Internet: He's acquainted with right-wing populists like the Geert Wilders in Holland and Islamophobes such as the American pastor Terry Jones. Local PI groups have formed in many German cities, as well as in Austria and Switzerland; the Munich PI branch is being monitored by Bavarian state intelligence officials.

When Matthias Rohe, a Bavarian Islam scholar who argues for a more nuanced understanding of the religion, gives a talk, he is often booed and insulted by anti-Islamists. One PI comment reads: "In the future, people attending Mr. Rohe's speeches should make sure to bring the appropriate equipment: a mop and a bucket, a camera, a nice big cross … and a nice sharp knife."

In mid-November, the Leipzig fire department was called to the property of the Muslim Ahmadiyya congregation, where a garbage can was on fire. Next to it, emergency responders found five bloody pig heads impaled on wooden stakes. The floor had been covered with a blood-red liquid. The police suspects radical right-wingers were responsible.

The Ahmadiyya congregation is planning a mosque with two decorative minarets and prayer rooms for about one-hundred worshippers in the Gohlis quarter of Leipzig. Two weeks before the attack, the right-wing extremist National Democratic Party (NPD) had held a demonstration. By the end of last week, over 10,000 citizens had signed a petition called "Gohlis Says No!". A CDU politician was instrumental in launching the signature drive; organizers insist that a mosque would "destroy" the quarter's character.

There's no doubt that Islam has become more visible in Germany in recent years. Muslims now have risen to higher positions in politics and the economy. Mosques are no longer just being built in industrial areas on the edges of cities, but, as in Leipzig, downtown. But according to Yasemin Shooman from the Academy of the Jewish Museum in Berlin, this continuing Muslim integration is, paradoxically, one of the reasons anti-Muslim prejudice has become stronger.

The NPD has recognized how to transform skepticism and hatred of Islam into political capital. In their party newspaper, Deutsche Stimme ("German Voice"), an article describes how anti-Muslim campaigns can be used to "open doors for much broader anti-immigration sentiments": "The Muslims -- with their foreign origins, customs and religiosity -- create unease, fear and resistance among most Germans. The NPD is therefore well-advised from an electoral tactical perspective to focus the immigrant question on the Muslim question and to offer up Muslims as a space on which to project everything the average German doesn't like about immigrants."

Maren Brandenburger, the head of the Lower-Saxony intelligence service, confirms that neo-Nazis are increasingly stirring up hatred against Muslims, a phenomenon she sees as a "strategic reorientation of organized right-wing extremism." Anti-Islamic sentiment now comes in the guise of the average German man or woman.

'Let That Melt in Your Mouth'

In the civic center of Bonn-Bad Godesberg, about 50 older men and women are listening to a talk by Marie-Luise Hoffmann-Polzoni, the chairperson of the Womenforfreedom association. Her subject: "Sharia vs. Human Rights." On a table there are German books with titles like "The Jihad System" and "Endangered Freedom." On the wall there's a photo of a man whose back is covered in cuts, supposedly having been flogged because he converted from Islam to Christianity.

Hoffmann-Polzoni wears a black frilled dress and speaks with a tempered voice. The vision of Islam she paints is a grim one: stonings, crucifixions and decapitations are expected by Muslims as penalties for purported crimes like adultery. "Just imagine that," she whispers.

Anti-Muslim speech has found its way into the center of society, stoked by politicians like Hans-Jürgen Irmer, the deputy floor leader for the CDU in Hesse. He warned state parliament that "Islam is set on global domination," and that "we don't need more Muslims, we need fewer." Muslim groups, he said, could not be trusted -- because deceiving non-Muslims is a central part of Islam.

Merely the expression of an opinion? From a legal standpoint, Islam can be criticized just as harshly as Christianity in Germany, says Maassen. In the case of Politically Incorrect, authorities are unsure whether to consider it a digital platform or an organization with leaders. Monitoring a blog for its opinions is considered legally questionable. Intelligence officials speak of a "gray area."

But perhaps gray areas can be eliminated. Last Tuesday, the anti-racism commission of the Council of Europe rebuked the German government for not following through on an initiative to include a provision in the penal code that "makes racist motivations an aggravating factor" in crimes. Countries like the United Kingdom and the United States are further along on this path: They have laws against so-called hate crimes largely to protect immigrants.

Ender Çetin, 37, is a victim of hate and racism. The head of Berlin's Sehitlik Mosque Association has been attacked several times in the past three years. In addition, there have been four arson attacks against the mosque, balloons filled with paint were flung against the walls, tombstones were covered in swastikas and, one time, there was a pig's head in front of the door. In April, Cetin received a letter: If he doesn't immediately leave Germany, he will be shot.

Çetin asked for police protection, but the authorities played down the issue. Many members of his congregation are afraid, he says, particularly after murder spree undertaken by the neo-Nazi trio NSU. Now he has installed security cameras, paid for with private donations, at the entrance of the mosque.