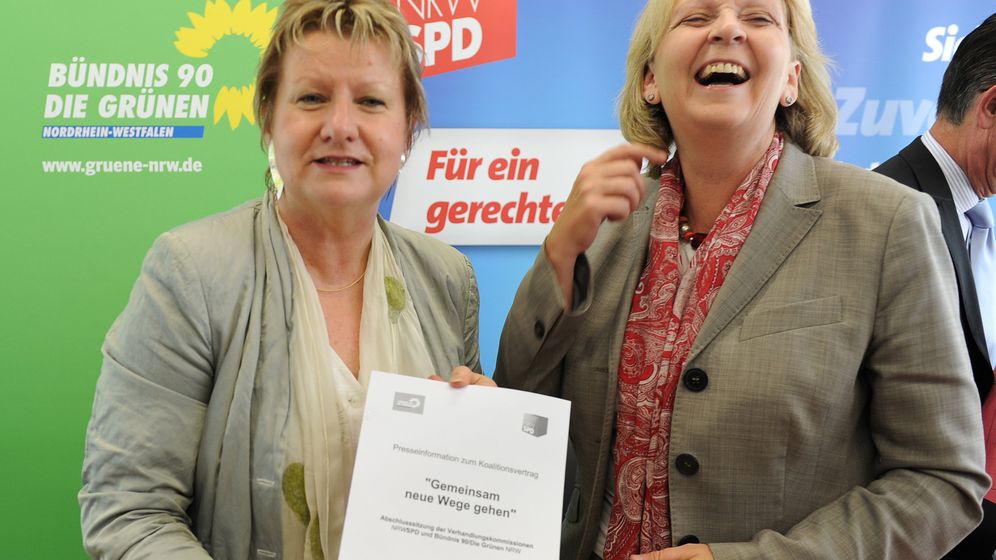 On Wednesday, two women took the political helm in the state of North Rhine-Westphalia. The country's most populous state will now be led by a minority coalition governmentpairing the center-left Social Democrats (SPD) with the Green Party. Hannelore Kraft, 49, of the SPD, is the new governor, and Sylvia Löhrmann, a 53-year-old member of the Greens, will serve as her deputy.

It marks a fundamental shift for a state that has long been known as much for its graft and grime as it was for it coal and steel. Even as the rest of the country progressed politically, NRW remained a man's world, led by powerful former governors like Jürgen Rüttgers, Wolfang Clement and Peer Steinbrück. But this week, a message of female empowerment emerged from the former boy's club.

"The future will be about women and girls," the new government states in its coalition agreement. Political issues pertaining to women in the state have been placed in a portfolio that is to be called "emancipation." "We are convinced that gender equity creates opportunities in all areas of society," the parties write.

Furthermore, Kraft announced the composition of her cabinet on Thursday -- it will be comprised of six men and six women. "We will have a cabinet with exactly as many men as women -- and I believe this is the first time that has ever happened in Germany," Kraft told a public radio station.

A Positive Shift in Gender Roles

But while female empowerment may be a novelty in North Rhine-Westphalia, it has already been a part of everyday reality in some other parts of Germany. In recent years, gender roles have been shifting rapidly on the German political lanscape. The transition may come with fits and starts, but change is happening.

At the federal level, Chancellor Angela Merkel of the conservative Christian Democratic Union (CDU) has been leading the country for five years; and Labor Minister Ursula von der Leyen, likewise with the CDU, is considered capable of holding almost any high office and was recently briefly considered as a possible contender for the German presidency.

Both the environmentalist Green Party and the far-left Left Party have female co-chairs -- Claudia Roth and Gesine Lötzsch respectively -- at the national level. And in Andrea Nahles, the Social Democrats have a female general secretary for the first time. Within the business-friendly Free Democratic Party (FDP), which shares power with Merkel's conservatives in government, Birgit Homburger serves as the party's floor leader in national parliament.

"In every political area and subject, the presence of women has come to be taken for granted," former Minister for Family Affairs Renate Schmidt of the SPD has said.

Nevertheless, it is too early to describe Germany as country of emancipated women. Women still remain underrepresented in top jobs in politics and they must often fight prejudice and glass ceilings.

Despite various quota schemes for women, key positions of power are still out of reach for many. In NRW, Kraft will join Christine Lieberknecht, the governor of Thuringia, as the sole female leaders of German states. Before them, only one other woman succeeded in reaching that level. Heide Simonis of the SPD was governor of the northern state of Schleswig-Holstein from 1993 to 2005.

Still, a trend appears to be emerging, and a positive one at that. It is hard to imagine any politician today describing his female colleagues the way one did in 1984, when he said: "They look better than they talk." Indeed, female politicians are crowding into administrative bodies and into positions of power -- both at state and federal levels.

The most symbolic rise yet has been that of Angela Merkel. In 2005, the CDU leader was chosen as her party's candidate for the chancellorship. The decision marked a turning point for female politicians in Germany. Many questioned at the time whether a woman in the Chancellery could succeed. The then-chairman of the center-left SPD, Franz Müntefering, even want so far as to say: "The woman cannot do it." It's a slam that former Schleswig-Holstein governor and fellow SPD member Simonis described as being "pretty close to a smear."

In the end, though, smears made no difference. Merkel went on to become chancellor and then got re-elected four years later. Her example is one of a number which suggest that the days when opinions about a person's abilities were determined by gender are becoming a thing of the past. Besides, German political parties can profit by including women in their leadership ranks -- it provides them with a more modern face and can also attract new groups of voters.

A good example is Ursula von der Leyen. When the CDU politician from Lower Saxony was made family affairs minister in 2005, she seemed like a cliché come to life. What better issue for a mother of seven to concern herself with? But it was a deft move to put women in charge of what are supposedly women's issues -- because they are perceived as trustworthy and authentic.

'My Party Colleagues Told Me I Was Crazy'

It is also indicative of how times have changed. Issues like the family didn't get as much attention only two decades ago. "During my early years (in politics), whenever I tried to bring up the subject of childcare, my party colleagues told me I was crazy," says former Family Minister Schmidt. "In the 1980s, we even had to use masculine language. That is no longer the case today."

It would be presumptuous to assume that female politicians are less prepared for a political row than their male counterparts. Indeed, there are plenty of examples of women in politics who are ready to do battle. But they can also be exemplary when it comes to quietly resolving potential conflicts.

"With female politicians," says Ralf Stegner, the SPD's party boss in Schleswig-Holstein and a member of Simonis' former cabinet, "team work is more important." The concept of acting like an alpha male is alien to them, he says.

"Meetings headed by women are a lot shorter because they are not as interested in self-promotion," adds one top female politician. "Women waste less time with cockfighting and are not as loud," says another. "Instead, often they are more persistent."

Thuringia Governor Lieberknecht and the Federal Education and Research Minister Annette Schavan have built very solid reputations with their objective approaches. Neither of these politicians is likely to bang on the table with a fist -- because they believe that ultimately there would be no point in doing so.

"Female politicians think in a more networked way," Schmidt explains. "They turn the screw, and they know that by doing so, they have an affect on something else totally different too." Men, on the other hand, are more likely to "think in boxes," Schmidt adds.

Female politicians in Germany also tend to be more down to earth than their male colleagues. "Women do not like a fuss," declares one female politician with the Green Party. While governor of Schleswig-Holstein, Heide Simonis was well known for standing in line with other workers to have her lunch in the cafeteria at the state parliament. And even though she is governor of her state now, Lieberknecht, a theologian and former pastor, can still be found at the pulpit of her local church in the municipality of Ramsla during the weekends.

There are, however, limits to a softer style of politics. And sometimes female politicians have to role up their sleeves for a good political brawl. "Women in politics also need to learn to use masculine tools of the trade," argues Renate Künast, the Green Party's parliamentary floor leader. "Women must not let anyone get the better of them."

Nobody demonstrates this better than Chancellor Merkel herself. The chancellor knows how to eliminate political detractors within her own party, but she does it so artfully that it is never obvious until after she has taken someone out. A long line of disempowered male governors from within Merkel's own party can attest to that. 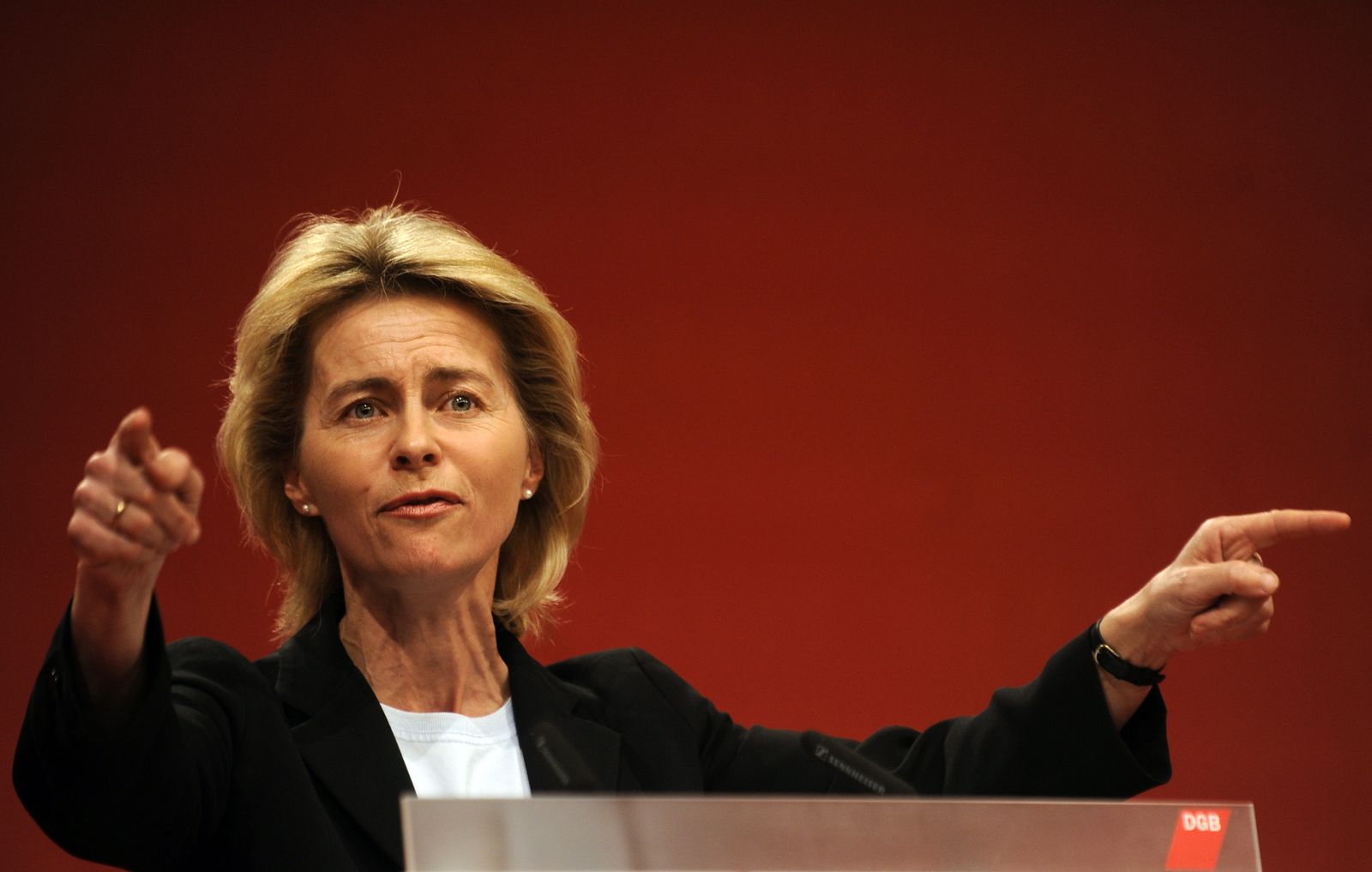 Labor Minister Ursula von der Leyen of the CDU is considered capable of holding almost any high office -- most recently she was proposed as one of the possible candidates for Germany's presidency.