Jens Spahn, an up-and-coming member of Chancellor Angela Merkel's Christian Democrats (CDU), was pointing at his smartphone screen in the back of his official car. "Just look at what they turned it into," he said. The headline, displayed prominently on the mobile site of the German tabloid Bild, read: "CDU Politician Complains about Headscarves." Spahn didn't seem particularly bothered, but said: "Quite overdone."

The report stems from Spahn's appearance the night before on a television talk show broadcast by ZDF, one of Germany's main public broadcasters. He is often invited when shows are looking for an "angry conservative" and he didn't disappoint the previous night. He said that he doesn't find it "particularly enriching to drive through streets where I don't see any women on the streets, and if I do, they are wearing headscarves." The two left-wing participants in the talk show obligingly flipped out.

On this day, Spahn had traveled to his constituency, not far from Germany's border with the Netherlands, in the morning but was expected back in Berlin in the evening. CDU leaders were meeting to discuss the central resolution to be presented at this year's party convention, which kicks off on Dec. 5. With general elections approaching in the fall of 2017 and Merkel having just announced her candidacy for a fourth term as chancellor, there would be a lot to talk about.

But Spahn didn't like the wording and was particularly bothered by the phrase "modernization's losers" because it sounded condescending. "That's not how we will win back voters we've lost to the AfD," he said, referring to the right-wing populist Alternative for Germany (AfD) party.

In the end, Spahn ensured that the phrase was deleted from the resolution. He also played a significant role in the inclusion of a host of other phrases, like Leitkultur, or "leading culture," a term referring to a guiding German national culture often evoked by conservatives, and "transit zones for refugees." And the sentence: "The events of last year cannot be allowed to be repeated." The reference is to the hundreds of thousands of refugees who flowed into Germany in 2015.

Spahn was able to push through these changes against the will of Merkel, who, in addition to being chancellor is also chair of the CDU. She would rather have left the resolution untouched. Despite just having announced her renewed candidacy, however, she was unable to prevent party conservatives like Spahn from changing the document. It is yet more evidence of the degree to which Merkel's authority has suffered in the last year.

It also shows how powerful Spahn has become within the CDU. Within the space of just one year, the 36-year-old has risen to become the most important representative of the party's conservative wing. He is, if you like, one of the winners of the refugee crisis. He has also become known for formulating his positions more bluntly than many in the party dare to. And for Merkel, that could ultimately become a problem.

"We have to put an end to this idea that we all agree about everything," he says. He spent the entire day driving through his electoral district and now he is rewarding himself with a hamburger, fries and a Coke at McDonald's. But even now, after his long day, he is eager to talk about the battle against the AfD.

He is most bothered by the mistakes made by his own party. He thinks the CDU has been too accommodating of a liberal elite that has become convinced of its own moral superiority. He says that the AfD cannot be allowed to co-opt issues like family or the fear of Islamism. And, he continues, it's not helpful to immediately cry "racism" when somebody voices anxiety that immigration is eroding the homeland.

'Disruption of Our State'

Last November, Spahn published a book that cemented his break with the chancellor on the refugee issue. The immigration of hundreds of thousands of people, he wrote, calls into question several certainties. We are experiencing "a disruption of our state."

The choice of the word "disruption" sounded dangerously close to failure and certainly didn't conform to Merkel's "welcoming culture." The term, however, was also wishy-washy enough that Spahn couldn't be assailed. Speaking in front of parliament last Wednesday during a budget debate, Merkel herself spoke of "disruptive changes." It was just one more indication that the debate within the CDU has, partially thanks to Spahn, shifted significantly within the last year.

Spahn doesn't see himself as a conservative. At the most, he is willing to allow that he promotes conservative values but views his political positions as liberal in the European sense of the term. That particularly applies in the area of social policy, where he has made a name for himself within the CDU parliamentary faction. He has in the past annoyed party leadership by reminding them that reforms to the pension and health care systems were inspired by the CDU's junior coalition partner, the Social Democrats (SPD), and that the CDU had originally had other ideas.

On one occasion, doing so almost spelled the end of his political career. In 2008 -- with 2009 general elections looming on the horizon -- Spahn, who was 27 at the time, criticized the pension increase passed by Chancellor Merkel's governing coalition, then as now a pairing between her CDU and the center-left SPD. Ronald Pofalla, who was CDU general secretary at the time, threatened him in response, saying he would no longer be considered for a senior post in Berlin. The deputy head of the Senior Union -- the CDU caucus representing the interests of elderly conservatives -- publically pledged to do what he could to prevent Spahn's re-election to the Bundestag, Germany's parliament. The incident made it clear to Spahn just how dangerous it was to openly defy Chancellor Merkel.

But it also helped him: Afterward, everybody in the party knew his name and, as a result of his forays into social policy, Spahn quickly came to be seen as a prominent up-and-comer. Still, it was the refugee crisis that propelled him to a leadership position. Even though some of his liberal positions don't necessarily enjoy broad support among German conservatives, his approach to immigration does.

Close Ties with the Greens

That approach was on display at a recent Spahn appearance at a restaurant in Vreden, a town in his electoral district. He was speaking to the local Senior Union chapter about refugees, criticizing those who complain about the food they are served. He also attacked leftists who, he said, sought to justify honor killings and forced marriages as being culturally determined. "Those who demanded integration 10 years ago were still considered to be on the far right," Spahn said.

One could say that Spahn is adept at operating in the swath of the political spectrum that is just short of far right. He knows how far he can go without attracting damaging criticism. He is also an expert at preventing his own sexuality from getting in the way of his political message. At the appearance in Vreden, he mentioned that he is gay early on in his speech and then quickly moved on. It is something he often does as a way of brushing the issue aside.

For a long time, Spahn was not widely considered to be conservative. In his tight jeans, suede boots and stubble, he fits in well with the liberal, big-city milieu with which he identifies. He has close ties with Green Party parliamentarians and would prefer a coalition with the Greens over a continuation of the current grand coalition with the SPD. But the fact that people didn't see him as a conservative was also a function of his sexual orientation. "People think that if you're gay, you are a leftist," he says.

In 2012, Spahn was one of the first conservative politicians in Germany to come out, doing so in a long interview with SPIEGEL in which he spoke of his experiences. In contrast to the beginning of his career, he said he had come to the conclusion that his homosexuality would no longer be a hindrance to his political ambitions. What he didn't realize at the time, though, is the fact that it can even be helpful.

When Spahn speaks about Islam, his homosexuality is present even if he doesn't specifically mention it. Spahn moved from rural western Germany to the trendy Berlin district of Prenzlauer Berg and as a young parliamentarian, he took advantage of all that the Berlin nightlife has to offer. It was a liberating experience. "I don't want the clock to be turned back on the liberality that we have," he says.

Spahn knows that his sexual orientation gives him something of a longer leash. He calls it "leg room." The sentence "not every culture is an enrichment," for example, doesn't sound intolerant when coming from his mouth, something that can't be said of other conservative politicians. When Spahn is criticized for not defending the traditional family, he says drily: "In the end, people will say that I'm homophobic."

Spahn is not the first politician to capitalize on his homosexuality. Dutch right-wing populist Pim Fortuyn, who was later murdered, explicitly used his sexual orientation to justify his radical critique of Islam, and Spahn found Fortuyn's idea of establishing a centrist protest party fascinating. It is the polar opposite of Merkel's strategy, which seeks to smooth out all differences.

For quite some time, Spahn didn't see himself as a Merkel adversary. He had even hoped that she would choose him as her general secretary following the last Bundestag elections in 2013. She instead chose Peter Tauber, who, like Spahn, was young but, unlike Spahn, unquestionably loyal.

One year later, Spahn took his revenge. Without notifying Merkel beforehand, he announced his candidacy for the CDU's national leadership board. The move meant that there were suddenly more candidates than spaces available -- and Merkel hates party elections where she doesn't know what the results will be. She was not happy about Spahn's candidacy, but unable to prevent his subsequent election.

If Merkel is re-elected as German chancellor, she could nevertheless decide to hand him a ministerial post. The advantages of doing so are clear: He would be forced to submit to cabinet discipline and to find a new role within the party. But it would also be helpful for Spahn: Experience in government would boost his career.

And his career could continue its upward trend. On a Friday in mid-November, Spahn paid a visit to an elementary school in his electoral district. A fourth-grader asked: "Do you want to be chancellor one day?" Most politicians would have given the standard answer that they hadn't yet thought much about it. But Spahn said: "Let's wait and see. I enjoy being part of making fundamental decisions. We'll see what jobs might await." There's no question: Jens Spahn has big plans. 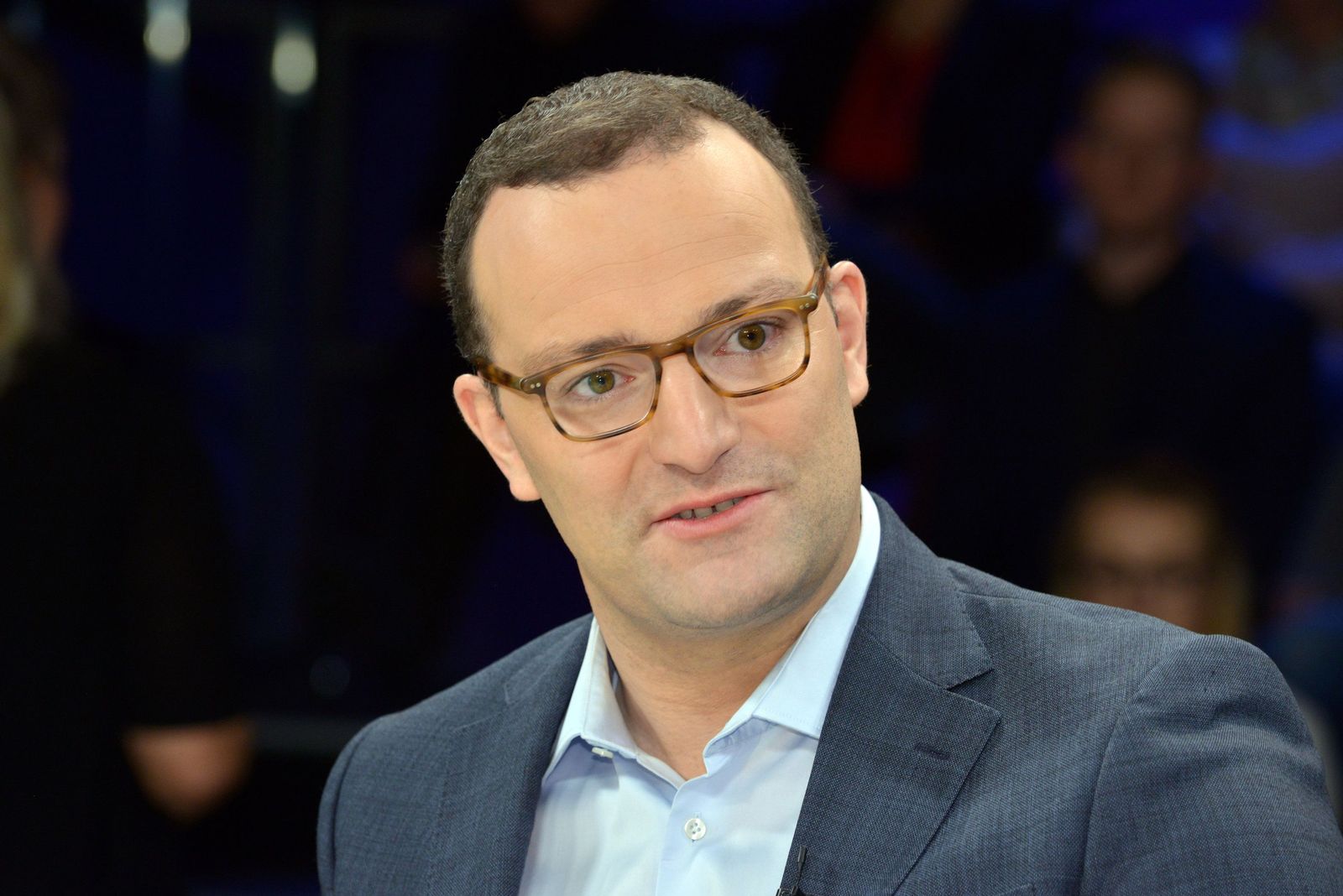