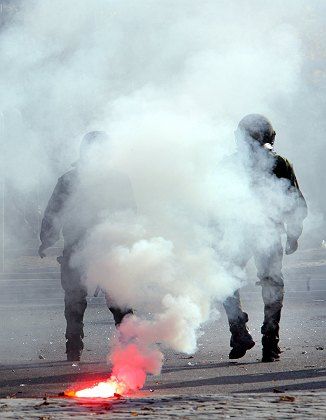 Sometimes, words simply aren't enough. Last month, the multicultural Berlin football club Türkiyemspor was in Rathenow, west of the capital for a regional league match. The atmosphere was tense, and became even worse once the opening whistle blew. Almost immediately, one of the Turkish players got in the face of a fan who had insulted him. "It almost turned ugly," says Mehmet Matur. "I jumped in between them and was able to calm the situation down."

Matur, 47, isn't a player. Rather, he is the so-called integration officer for the Berlin Football Association. His primary duty is to lead the fight against racism on Berlin football pitches. Normally, he relies on his voice, but sometimes, like last month, there is no choice but to get physical. "That is the last resort," he says.

The problem of racism on German soccer fields is one that has gotten worse and worse in recent years. There have been numerous cases of fans chanting ape noises at black players. Mass punch ups involving right-wing extremists after second and third league games have become more common. There was even a case last summer of fans firing off a torrent of anti-Semitic abuse at two teams of 14-year-olds.

Politicians and football officials have been discussing the problem for months, and already, a number of initiatives have been taken. The German Football Association (DFB) has appointed full-time security and fan representatives and has set up a large working group concerned with preventing violence. There is a new registration system for racist incidents, a country-wide fan group to look into incidents, and an initiative against homophobia.

Now, though, German football is beginning an effort to combat racism and violence in regional leagues as well. Racist insults and violent attacks on foreigners have become all-too-common on pitches across the country. A training program in the eastern German town of Halle over the weekend was the first step toward solving the problem.

"We have to do something to combat this problem," says Matur. "This training program is extremely important."

Referees, coaches, club officials and fans attended five forums addressing problems from identifying right-extremist symbols to dealing with racist and homophobic insults on the pitch and in the stands. Called "Making Clubs Strong," the seminar was organized by the fan initiative KOS and the League for Democracy and Tolerance.

"A lot of clubs have become sensitized to the problems, but they nonetheless feel overwhelmed," says Gerd Wagner from the project "Stay on the Ball," (am Ball bleiben), a group aimed at combating racism in football.

Helmut Spahn, in charge of security for DFB, likewise had high hopes for the weekend event. "This is a very important step towards making the topic more public and transparent," he said.

The problem is one that has long plagued soccer in Germany. Though not as visible in German stadiums as it is in Italy and Spain, where racist chants have become almost a weekly event, the problem has merely been displaced. Now, many of the incidents take place in train stations or on the streets prior to and after the matches. Many fan clubs, particularly in eastern Germany, have become bastions of neo-Nazi sentiment.

The development is not an accidental one. Combating creeping right-wing extremism takes time and money, resources that have not always been available -- and neo-Nazis have been quick to exploit the gap. As early as the 1980s, neo-Nazi leader Michael Kühnen built up a system to infiltrate the football fan scene.

It's a strategy still used by the neo-Nazi party NPD and other right-wing groups today. It is often easier to find socially disaffected youth in the football scene -- exactly those who tend to be drawn to the right -- than elsewhere. Indeed, many neo-Nazi groups actually sponsor local and regional football teams, primarily in Germany's east. In Hildburghausen in the state of Thuringia, and in Rathenow in Brandenburg, NPD-members have founded recreation clubs. In Lübeck, the regional football team VfB enjoys the support of an NPD-friendly fan club.

How soccer clubs can resist such infiltration was an important topic this weekend in Halle. Though the neo-Nazis appear less menacing without Third Reich flags and combat boots, they often work with codes and symbols. The number 18, for example, stands for "Adolf Hitler," and 88 for "Heil Hitler," based on the position of the letters in the alphabet. Neo-Nazis are also geared up with the token marks of the alternative left: black hoodies and peaked caps, for example, are worn by extreme right-wingers. A picture of Che Guevara qualifies as a symbol for the national fight for liberation. A seminar entitled "Is the Jersey Number 88 Taboo?" aimed at helping coaches and referees identify such symbols.

Even security guards at many of the matches aren't clean. Clubs often have to hire private security services. One police officer who asked not to be named noted, "guards in the east are often recruited from the red-light and bouncer scenes. They provoke more often than they protect." The Berlin club BFC Dynamo, for example, hired security personnel from a notorious boxing gym.

"We have to develop effective structures to regulate the problem," says Spahn. "People have to learn to recognize the danger signals and to deal with them themselves." After all, there are tens of thousands of games played each weekend. Outside observers can't be sent to all of them.