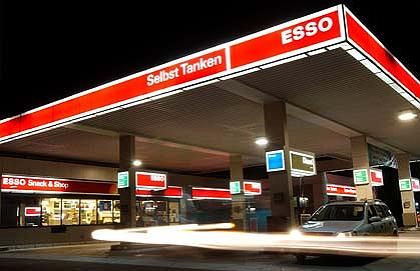 German Coffee roaster Tchibo and oil company Esso have abandoned a nationwide advertising campaign for coffee following criticism from the Jewish community that it had been using a slogan similar to a phrase used by the Nazis.

The companies had advertised for coffee at 700 gas stations with posters bearing the slogan "Jedem den Seinen" or "To Each his Own," a phrase coined by the Roman statesman and philosopher Cato.

But the words in the slightly different German grammatical form "Jedem Das Seine" were used by the Nazis and displayed at the entrance to the Buchenwald concentration camp near Weimar. The Nazis' cruel, twisted message to the Jews, political prisoners, homosexuals and prisoners of war incarcerated there was that they were only getting what they deserved.

The Central Council of Jews in Germany told the Frankfurter Rundschau newspaper that the posters were either "unsurpassable tastelessness" or a reflection of "total ignorance of history."

Tchibo spokeswoman Angelika Scholz admitted that the choice of slogan was unfortunate and that the company had never intended to hurt anyone. Esso spokesman Olaf Martin blamed the advertising agency, saying it had apparently failed to recognize the historical significance of the sentence.

It's not the first time firms have got into trouble for using "To Each His Own" for advertising purposes. Cellphone giant Nokia was criticized by the American Jewish Committee for advertizing exchangeable cellphone covers with it in 1998 and quickly swapped the slogan for Shakespeare's "As You Like it."

Shortly after that, German food retailer Rewe failed to stop a brochure that read "Barbecuing: To Each His Own." Rewe made a public apology.

In 1999, fast food company Burger King in the eastern city of Erfurt stopped distributing advertising leaflets with the phrase after people protested.

And in 2001, customers of Munich-based Merkur-Bank complained about the words being used in an advertising campaign for bank accounts.