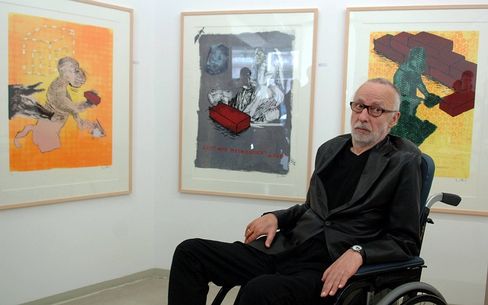 Germany on Monday lost one of its most famous artists when Jörg Immendorff, 61, died at his home in Düsseldorf. He lost a long battle with the fatal neurodegenerative disorder known as Lou Gehrig's disease. The disease had progressed to such an extent in recent months that Immendorff could no longer move his arms and legs.

Former German Chancellor Gerhard Schröder, whose portrait is one of Immendorf's best-known works, described the painter's death as a huge loss for the art world. "With Jörg Immendorff, we have lost one the greatest German painters -- one who attained a great international reputation," Schröder said. "He often accompanied me on my trips abroad as chancellor, and with his exhibitions he helped to establish Germany's reputation as a country of high culture."

From Neo-Expressionism to Realism

Born on June 14, 1945 in the town of Bleckede in the western German state of Lower Saxony, Immendorff emerged as one of postwar Germany's most famous painters. Recent surveys of the world's 100 most important artists in the German magazines Kunstkompass and Capital, placed the Düsseldorf art professor -- whose painting styles ranged from neo-expressionism to surrealism and whose work dealt with themes like Germany's postwar division and eroticism -- at No. 10.

Immendorff unveiled his offbeat official portrait of Schröder -- with ironic Roman-imperial overtones -- to acclaim and controversy in March 2007. His last major exhibit came in winter 2005 at Berlin's New National Gallery. During the 1980s he had taken part in the influential exhibition "Dokumenta," in Kassel, and in 1996 he received the world's most lucrative art award, Mexico's $250,000 Marco Prize. Two years later he became the first German in the wake of the Second World War to receive a retrospective exhibition at Warsaw's National Museum.

His first major retrospective was held at the Kunstmuseum in Wolfsburg in 1996. He was also a co-founder of the German painting movement "Jungen Wilden," or wild youth. 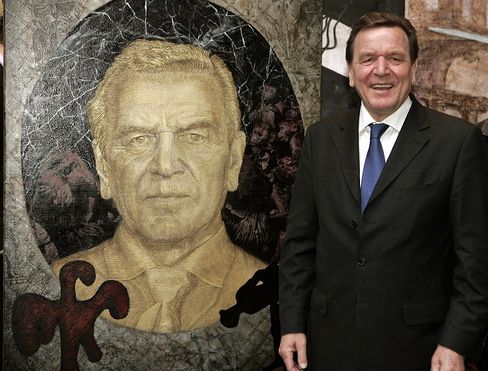 Immendorff's likeness of Gerhard Schröder today hangs in the gallery at the federal chancellery in Berlin.

In recent years he had been public about his terminal illness. He donated money to Berlin's prominent Charité hospital to invest in research in Lou Gehrig's disease. He also appeared in a stage production by the provocative director Christoph Schlingensief -- and éisplayed the effects of his severe illness to the audience. His declining health also meant that he needed assistants to help finish his final art works.