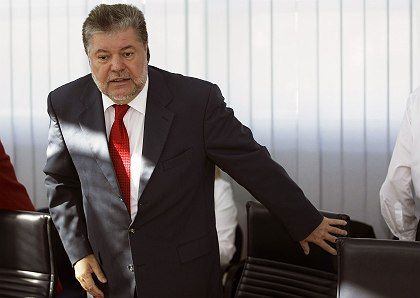 Excuse me. I don't feel so well.

If Germany's Social Democrats had hoped that nominating their own candidate for president would provide a needed boost to their poll numbers, a new survey shows that the gambit may have had the opposite effect.

According to a survey completed by the polling agency Forsa, just 20 percent of German voters would put their X next to the SPD were elections held on Sunday. The result shows a drop of three percentage points from the week before and is the lowest result ever polled by Forsa, according to the newsweekly Stern, which commissioned the poll. Other surveys found support for the SPD hovering around 21 percent late last week.

Of particular concern for the SPD, however, is that the survey shows the party to be only five percentage points ahead of the Left Party, which came in at 15 percent. Indeed, many see the tradition-rich Social Democrats as being in one of the deepest crises of its 145-year history.

Among certain voter groups, the results were even more disturbing for the center-left party. Only 17 percent of adult males would vote for the SPD, the same percentage that would support the Left Party. The free market FDP received 16 percent among that group.

The SPD snowball of failure has been gathering speed for some time. Even as former Chancellor Gerhard Schröder was campaigning for a third term in 2005, many party members, disgruntled at Schröder's having moved the party toward the center, were quitting in favor of the WASG, a party to the left of the SPD. That party finally joined forces with the PDS, a post-Communist party from eastern Germany, to form the Left Party.

Current party leader Kurt Beck has been inconsistent in his comments about the Left Party and has been slammed in the German media for his alleged willingness to form a leftist coalition. Repeated denials, the most recent of which was issued at a weekend SPD gathering, have done little to convince voters otherwise. (The current poll was completed prior to the Saturday meeting.)

"I never would have thought such a result possible. You have to go all the way back to the 1950s to find a similar result," Peter Lösche, a political research analyst for Forsa, told Stern.

Just last week, the SPD seemed optimistic that Gesine Schwan might be able to save it from a further loss of support. At the end of May, the SPD nominated the academic Schwan as the party's candidate to challenge President Horst Köhler for the ceremonial position as German head of state. The election is next summer with only parliamentarians and a selection of state politicians allowed to vote.

But even as Schwan enjoys popularity and respect in Germany, the move was widely lampooned as yet another signal that Beck would be willing to form a coalition with the Left Party. After all, Schwan would need the votes of Left Party parliamentarians to trump Köhler's support among the Christian Democrats (CDU) and the FDP.

"Many voters are afraid that, despite all the denials from party head Beck, her candidacy is a signal that the SPD is willing to work with the Left Party on the national stage," Forsa head Manfred Güllner told Stern.

The poll also revealed just how far Beck's popularity lags behind that of Chancellor Angela Merkel, who is also leader of the CDU. Were Germans allowed to vote directly for their chancellor -- rather than for parties, as the country's political system allows -- Beck would receive a paltry 11 percent of the vote. Merkel, on the other hand, would get 60 percent.