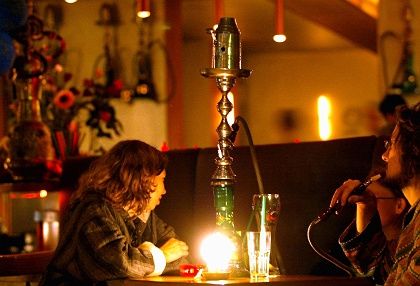 Saarland's decision to allow smoking in hookah bars is one of several recent ban amendments.

The list just keeps on growing. Later this year, Switzerland will become the most recent addition to the club of European countries that have banned smoking in public places. A European culture famous for its eagerness to light up is increasingly having to crush out its butts on the sidewalk.

But Germany seems to be moving the exact opposite direction these days. Since January, when the list of states with smoking bans jumped to 11 out of 16, three have now taken significant steps backward.

The most recent to reconsider controlling the cancer sticks was the eastern German state of Saxony. Courts on Thursday decided that single-room bars and restaurants were being unfairly disadvantaged by the rules, which mandated that smokers be isolated in a separate room. The owners of smaller restaurants and bars argued in court that this was unfair to businesses that did not have space to cordon off smokers from non-smokers. Groups who lobbied to relax the ban claim that between 75 and 95 percent of the state's bar and restaurant patrons are smokers.

Also this week, a court in the south-western state of Saarland ruled that smoking could continue in hookah bars. Those establishments, the court argued, depend almost exclusively on customers who come just to smoke water pipes.

Bavaria, which introduced the strictest ban in January, also recently relaxed its new non-smoking rules. Politicians from the ruling Christian Social Union (CSU) decided to allow smoking in festival tents -- thereby saving the scores of smokers who descend on Munich during Oktoberfest.

Günther Beckstein, the governor of Bavaria, announced the exception earlier this month, and said that the tents will stay smoker-friendly at least until 2009. Many of the CSU's top politicians had blamed the state's strict smoking ban on the party's poor showing in recent local elections.

Each recent decision to weaken local smoking bans was applauded by service industry representatives, like the German Hotel and Restaurant Association (Dehoga). The association recently released a report claiming that 58 percent of their member establishments in Baden-Württemberg and Lower Saxony -- both states that introduced smoking bans in January -- have seen a sharp drop in business in 2008.

German cancer researchers, meanwhile, find the weakened bans discouraging. Otmar Wiestler, leader of the German Cancer Research Center (DKFZ) told the Associated Press said that the exemptions would be particularly harmful to the health of the roughly one million Germans employed at restaurants and bars.

"We are miles away from implementing comprehensive protection for non-smokers," said Wiestler.

Klaus Stern, a law professor in Cologne said that a trend of state courts making partial exceptions to local legislative decisions was a sign of bureaucratic inefficiency.

"This hodge-podge (of decisions) cries out for a nationwide ruling," he said.