In the beautiful new world of Ahmad Wali Sidiqi, there were no more bills to pay. Rent, electricity, even weddings -- the "baet-ul-mal," or people's treasury, paid for all of these things for him and the others. And thanks to his computer skills, he even had his own office and staff working for him, he bragged in a telephone conversation. When his father asked about his health in a conversation in February 2010, he replied that where he was now living, "there is a cure for all illnesses." For the family, which lived in a high-rise apartment development in Hamburg, it sounded as if Sidiqi had discovered a sort of Islamic Shangri-La in the Hindu Kush region, a paradise on earth.

But the world intelligence agents reconstructed, with the help of wiretapped telephone conversations and statements Sidiqi made later on, was completely different. It was dusty and bleak, full of hardships, threats and arduous training. It was the world of the terrorist training camps run by al-Qaida and the Islamic Movement of Uzbekistan (IMU), where Sidiqi learned the art of killing. In fact, for Sidiqi, life in the training camps was more hell than heaven. He was afflicted by a knee injury, and he also contracted malaria.

The Higher Regional Court in the western German city of Koblenz will address this reality on March 19. The case against the 37-year-old German of Afghan descent will revolve primarily around al-Qaida attack plans that triggered a wave of terror alerts in Europe. In the fall of 2010, the German interior minister at the time, Thomas de Maizière, stood in front of the TV cameras and explained, with great concern, that terrorists were planning an attack in Germany "before the end of November." De Maizière sent armed federal police officers to airports and train stations, and he had barriers erected around the Reichstag, the building in Berlin where the German parliament meets.

In its 114-page indictment, the Federal Prosecutor's Office describes Sidiqi, a muscular man with a round, chubby face, as someone who was to play a key role in this terror plot. He was arrested in Kabul in July 2010 and, while still in detention in Afghanistan, developed into a key witness. He is currently the most important prisoner capable of providing German authorities with information about the inner workings of al-Qaida.

For Sidiqi, the road to jihad began at 2:40 a.m. on March 4, 2009, in the Rahlstedt district of Hamburg. Temperatures were close to freezing outside when Sidiqi and his wife dragged their suitcases into the elevator of a red brick apartment building on Saseler Strasse. A surveillance camera filmed them as they began their journey, part of a group of 10 travelers leaving Germany that day. Sidiqi was wearing a striped, floor-length kaftan and a dark coat. The group also included his younger brother, his friend Shahab Dashti, and Dashti's wife.

For Sidiqi, his life in Germany ended the day he and the small group of travelers boarded a flight in Frankfurt, bound for Peshawar in Pakistan. He saw Germany as a country of sin, of the "kuffa," the word he uses for infidels. He and the others were traveling on one-way tickets.

Sidiqi was 16 when he arrived in Hamburg in 1990, together with his father, an Afghan pilot, and the rest of the family. He never felt completely at home in Germany, and struggled to complete his high school diploma. He eventually opened a bakery and later a travel agency, but both businesses failed. "He had money problems," says his sister Mahbooba. "We were wealthy in Afghanistan. The change wasn't easy for Ahmad."

At the Hamburg airport, where he began working for the Cleaning and Aircraft Technical Services department in 1997, Sidiqi met a man who may have played a decisive role in his radicalization: Mounir al-Motassadeq, a Moroccan man who assisted the organizers of the Sept. 11 terror attacks.

Motassadeq took Sidiqi with him to the Al-Quds Mosque, a focal point for radical ideas, the same place where Mohammed Atta and some of the other 9/11 terrorists had met. At the mosque, Sidiqi went from being something of a loser to a religious zealot. He met the inner core of the Hamburg Islamist community there, as well as the members of the group with which he would later travel to Peshawar.

Although the would-be militants from Hamburg had gone to Pakistan to join al-Qaida, they initially ended up with the Uzbek Islamists in the IMU. In the Masoud region of South Waziristan, an area controlled by insurgents, Sidiqi and his friends became acquainted with the military lifestyle of the mujahedin. Women and men lived separately in the villages. At first, no one was allowed to leave his hut without permission. The IMU militants were suspicious, fearing that the outsiders could be spies who had come to mark cars and buildings for US drone attacks. Sidiqi and his friends were repeatedly interrogated.

Living in a World of Jihad

During weapons training with Kalashnikovs, the commanders shouted in Arabic, and the commands were translated into Turkish and Farsi, but not into German. For the apprentice terrorist, his telephone calls to Germany were probably the only high points of his life at the time. Once, when his mother told him that she was having problems with the building management, Sidiqi lost control and shouted: "They're devils in the land of the infidels." He told her that if he ever got his hands on them, he would "behead them."

By now Sidiqi was living completely in the world of jihad. At a wedding, the Afghans from Hamburg met then IMU leader Tahir Yuldashev, to whom they swore allegiance soon afterwards.

Even his father, who traveled to Pakistan in 2009, could not dissuade Sidiqi from pursuing his mission of jihad. After trying unsuccessfully to convince his sons to come home, the old man returned to Germany in tears. Ahmad and his brother had told him that they intended to stay with the IMU and to fight.

During a long march, Sidiqi injured his knee, which was already weak from an earlier injury. From then on, the training was torture. He asked to be excused from doing pushups and from running exercises. But the commandant reacted furiously to his request and fired a shot right next to Siddiqi's ear. Sidiqi obeyed, but he also made up his mind to leave the IBU and join al-Qaida instead.

With al-Qaida, Sidiqi and his Hamburg friends were trained in the use of the "Top 82" anti-tank weapon, as well as mortars called "Hawan." In one of the recorded telephone conversations, Sidiqi said he intended to capture and kill infidels, and that he wanted to shoot at the "asses of the Americans." A key question in his upcoming trial could revolve around whether Sidiqi actually fought and killed people. His defense attorney, Michael Rosenthal, doubts that he did.

At some point Sidiqi's younger brother could no longer stand the pressure. After waking up screaming in the middle of the night, he decided to return to Germany. Sidiqi, on the other hand, was making contact with senior members of al-Qaida. In June 2010, he and Rami Makanesi, a German of Syrian descent who had gone to Pakistan from Hamburg shortly after Sidiqi, met a man whom they described as the "foreign minister" of the organization, the Mauritanian Sheikh Mohammed Younis.

The al-Qaida official had developed a plan to bring terror to Europe. According to the testimony of Sidiqi and Makanesi, Younis was the mastermind behind the threats that had the German government so worried in late 2010.

According to the indictment, four of the remaining Hamburg activists -- Sidiqi, Makanesi, Naamen Meziche and Shahab Dashti -- were preparing for militant operations in Europe at the time. The indictment also alleges that then al-Qaida leader Osama bin Laden himself had given his blessing to the project.

Meziche and Dashti were supposed to form a sleeper cell. They were instructed to travel to Iran at first, where Dashti, who had already appeared in a propaganda video, was to undergo facial plastic surgery. According to the plan, once the two al-Qaida operatives were in Iran they would be told where in Europe they were to be deployed to begin building structures for Bin Laden's organization.

Sidiqi and Makanesi were assigned to build a cell in Germany. The rules of behavior for the would-be terrorists are reminiscent of those used by the 9/11 killers. Younis' men were instructed to shave off their beards, cultivate a Western lifestyle and avoid contact with radicals.

Makanesi was arrested in Pakistan and has since been sentenced by a Frankfurt court to a prison term of four years and nine months. The Americans apprehended Sidiqi at a taxi stand in Kabul. Dashti never had his face operation. He was killed in an American drone attack.

Investigators with Germany's Federal Criminal Police Office believe that al-Qaida's plans still pose a threat, even though Bin Laden is dead and Sheikh Younis al-Mauretani was arrested in Pakistan last September. The only member of the group that left Hamburg for Pakistan in 2009 who could still carry out Younis's plan is Naamen Meziche. His whereabouts are unknown. 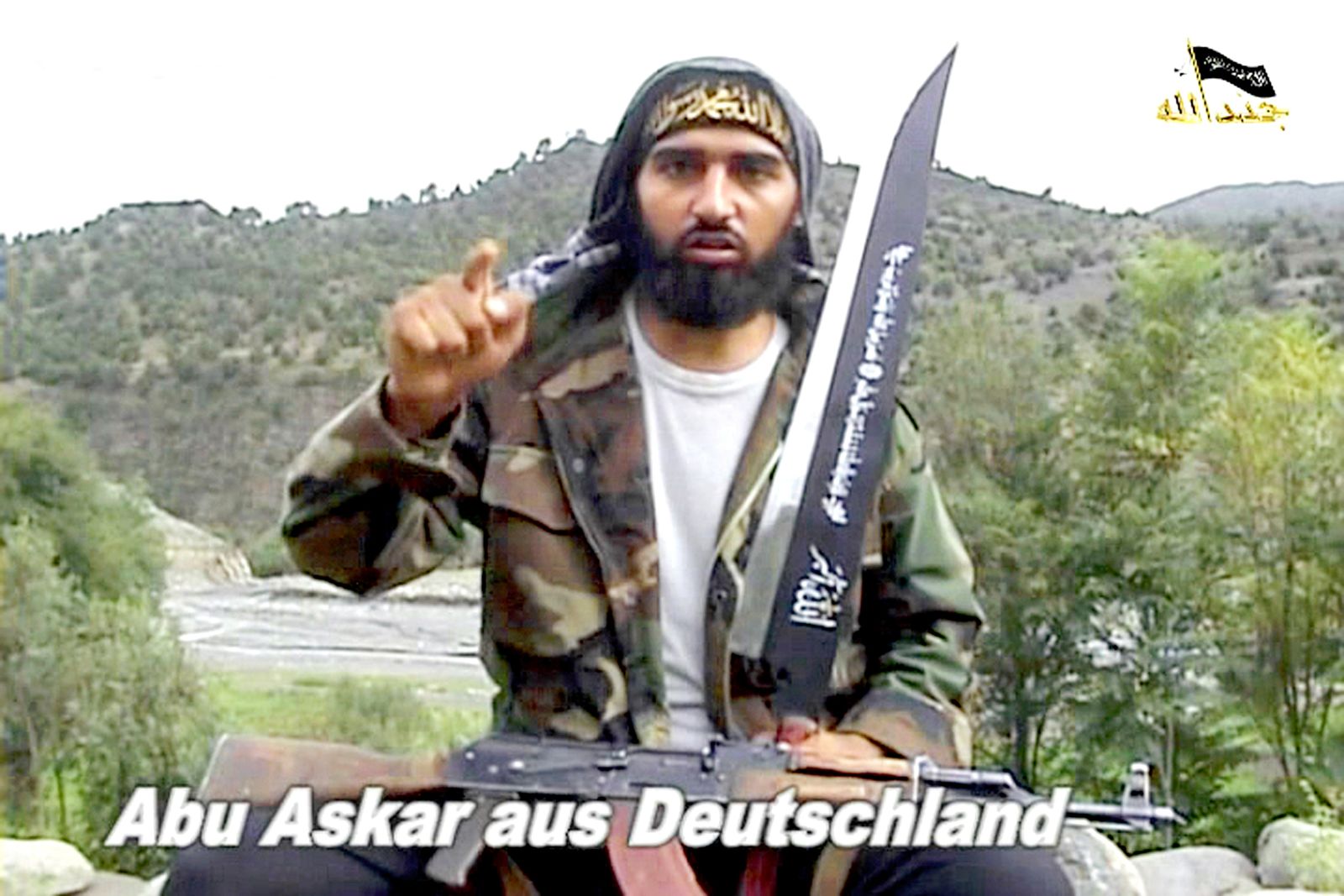 An image grab from a video showing Shahab Dashti, a friend of Ahmad Sidiqi who travelled with him from Hamburg to Pakistan.