Christoph Ahlhaus is almost certain to go down in history as the shortest-serving mayor Hamburg has ever seen. Only one-fifth of voters in the city-state, which is home to Europe's second-largest port, want to see him remain in charge after Sunday's election. It also appears Ahlhaus will deliver a bitter defeat for Angela Merkel's conservatives in one of seven pivotal state votes that could further erode the chancellor's power at the national level.

Ahlhaus has overseen the late stages of an astonishing collapse in the polls for the conservative Christian Democratic Union (CDU) since he took over as mayor in July. The party took 42.6 percent of the vote in 2008, but a poll taken last weekend had the conservatives at a mere 23 percent.

The plunge began following the resignation of the popular Ole von Beust, who had served as mayor and local CDU leader and formed Germany's first government coalition between the conservatives and the Greens at the state level after the 2008 election. Tired of politics, Beust, who is openly gay and served as the embodiment of a modernized conservative party under Chancellor Angela Merkel's leadership, stepped down, triggering massive erosion of support for the party. Lacking a better candidate, the CDU picked Ahlhaus as replacement mayor, a classic conservative who had little of Beust's liberal flair and even less in common with the Greens.

What had once been hailed as a possible model for a national government coalition between the fast-rising environmentalist Green Party and the Christian Democrats quickly began to implode -- a trend hastened by Merkel's own right-ward shift in Berlin after her party linked up with the business-friendly Free Democratic Party (FDP) to form a government in 2009.

Mayor Ahlhaus is adamant that the reason for his party's malaise this year is the failed coalition with the Greens. But political observers in the city also see many failings in the current mayor, who has been plagued by missteps. Ahlhaus often has trouble finding the right words and he has alienated voters with his criticism of the CDU's former coalition partner, the Green Party, which still enjoys considerable popularity in the city. His sometimes gruff style comes across as an affront to many Hamburg residents, with their reputation for cool Hanseatic reserve.

Even the most loyal CDU members believe that Sunday's vote, the first of what is being described as a "super election year," will end in a debacle for the conservatives.

In 2008, the CDU polled just under 43 percent of the vote, taking 56 out of 121 seats and losing the overall majority the party had enjoyed since Beust's election into office in 2001. Crucially, however, their favored coalition partners the FDP -- currently part of a government coalition at the national level with the CDU -- lost all their seats because they just missed out on the 5-percent vote threshold, a rule designed to avoid the confusion of having large numbers of small parties. The only other parties to win seats were the center-left Social Democrats (SPD), the Left Party and the Greens. With any kind of deal with the Left Party unthinkable for the CDU, given the national party's ties to the successor to the East German communist party, the conservatives opted to govern together with the Greens.

'The Outlook is Not Good'

The polls suggest a mighty resurgence on Sunday for the SPD, a party that has foundered on the national level since former SPD leader and Chancellor Gerhard Schröder called for new elections and dissolved his government with the Greens in 2005. Following a series of corruption scandals, voters in Hamburg penalized the SPD and sent it into the opposition a decade ago after nearly 50 years of rule. But going into Sunday's election, the party is polling at 46 percent support and mayoral candidate Olaf Scholz and his party are looking forward to a return to power. Scholz's platforms do not differ greatly from those of the more conservative CDU, which is also helping the party to win voters.

They even have a chance to achieve the relatively rare feat of an absolute majority. And, if not, they would be ready to fall into a traditional alliance with the Greens. After the collapse of the Hamburg government in November, SPD national party boss Sigmar Gabriel said: "Red-Green in Hamburg would not only be a good starting shot for 2011, but also the only realistic alternative for the 2013 (national) election." A win in Hamburg would provide additional momentum to the SPD following its recent election win in the western state of North Rhine-Westphalia.

So what happened to the CDU?

Ahlhaus is refusing to admit defeat ahead of the vote, and he is hoping that a large number of undecided voters will help reverse the SPD's lead. But even he admitted to German broadcaster ZDF that "the outlook is not good." He pinned the blame for his party's crash in the polls on the coalition with the Greens, to whom he claimed the CDU had made too many concessions. "And that is why, since the beginning of the coalition, the CDU's approval has gone steadily down," he said. The CDU had already dropped to 31 percent a year ago -- down from 42.6 percent in the 2008 election.

The coalition partners squared off over several flashpoints: The Green Party's education reforms, which included extending primary education from four to six years, were unpopular with the CDU, which had campaigned in 2008 under the slogan "Save the High Schools." But then-mayor von Beust eventually threw his political weight behind the reforms only to see them easily defeated in a public referendum in 2010. It was a devastating loss which led to von Beust's instant resignation and plunged the coalition into chaos.

And the long-debated plans to dredge and deepen the Elbe River to ease access to Hamburg's port for the new generation of larger container ships also proved divisive. A pet project of the CDU, ecological concerns of the effects of disrupting the river bed made it extremely unpopular with the Greens, although they were forced to agree to it in principle when they formed the coalition. Still, port workers had been irked by the fact that the CDU and Greens had sought to make the harbor financially independent of the city-state's government in the future, feeling the government's support for the shipping industry had been tepid.

Even if the SPD wins, the project is likely to proceed. To show his commitment to the local shipping industry, Scholz even put the scion of a respected Hamburg shipping family, Erck Rickmers, on his party's candidate list. A museum ship named after the family, the Ricker Rickmers, is an attraction known to every Hamburg resident.

Whatever the specific local details unique to Hamburg, the poll cannot fail to have an impact at the national level. At worst for Angela Merkel, it could represent the start of an alarming trend in 2011 which could see increasing numbers of her supporters turn against her. The practical impact of a lost election in Hamburg is limited -- in the Bundesrat, Germany's upper legislative chamber which is made up of state representatives, the CDU is already operating without a majority. The more vital issue is one of confidence: how the country will perceive the chancellor and her government in the face of such a defeat. She will hope that voters across Germany will not blame her personally for a loss at the polls.

Six more state elections will take place in 2011 after Hamburg, and the CDU could be looking down the barrel of a gun if a thrashing on Sunday turns out to be a portent of things to come. Next up after Hamburg is the southern German state of Baden-Württemberg, where the popularity of Merkel's party is waning sharply as a result of popular protests against the planned Stuttgart 21 infrastructure project to build a new train station in the city and a high-speed rail line.

Significant losses could see Germans across the country start to think twice about the ruling coalition, which has already suffered a slide in popularity in the past 12 months. Merkel herself will surely already be looking to 2013 and her chances of a third term as chancellor with wary eyes. 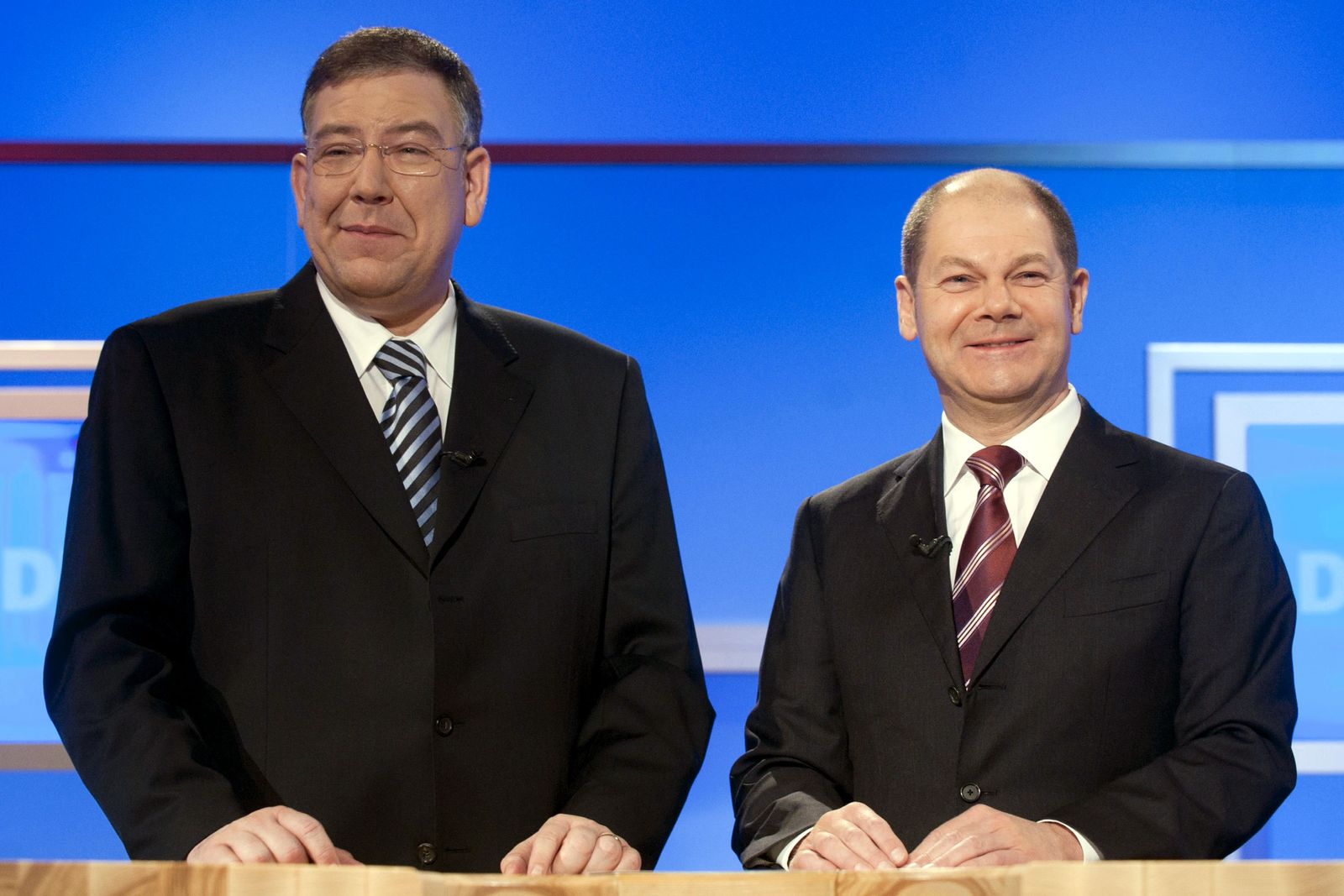 Facing off: Current Mayor of Hamburg Christoph Ahlhaus (CDU, left) will be hoping for a miracle against Olaf Scholz's SPD in the Hamburg election.