It is seldom that leaders live long enough to witness their own induction into the annals of history. But that was the rare honor reserved for former German Chancellor Helmut Kohl this week. He took his first step into the historical sunset on Tuesday, when he visited the conservative parliamentary group in Berlin for the first time in a decade.

There, Kohl took the opportunity to encourage his center-right successors not to abandon faith in Europe and to continue fighting for the common currency. "We must preserve Europe and continue to strengthen it," he told lawmakers from his Christian Democratic Union (CDU) and its Bavarian sister party, the Christian Social Union (CSU), according to meeting participants. "Conservatives must fight for Europe," he said. Participants also said that Kohl urged Germany to have more patience with Greece as it struggles to remain in the euro zone.

Tuesday's visit to the capital was a rare outing for the 82-year-old Kohl. The former chancellor has been in fragile health since taking a serious fall in his home in 2008, and his public appearances have been limited. Furthermore, his speech, always heavily accented, has become even more difficult to understand with age.

This week marks the 30th anniversary of Kohl's first election to the chancellery, in 1982. Widely revered as the father of German reunification and as a primary mover behind the introduction of the European common currency, he will be center stage again on Thursday, when he will appear at the German History Museum in Berlin for the unveiling of a new stamp in his honor.

Germany's historically minded, in short, would seem to have reached a consensus that Kohl's service to the nation is on par with that of Konrad Adenauer, Germany's first postwar chancellor. Indeed, his 16 years at the helm trump the 14 years Adenauer spent, from 1949 to 1963, rebuilding a war-shattered nation.

Still, Tuesday's meeting with Germany's conservatives served to highlight the fact that his own party is only just now beginning to come to terms with the man who plunged the Christian Democrats into crisis after he lost the 1998 general elections to Social Democrat Gerhard Schröder. One year after that vote, Kohl refused to divulge the provenance of a campaign donation of between 1.5 and 2 million deutsche marks despite being required to do so by CDU party regulations. Current Finance Minister Wolfgang Schäuble, long seen as a possible heir to Kohl as party leader, was also hurt by the scandal.

Angela Merkel, on the other hand, was the primary beneficiary. Her public appeal, published in the daily Frankfurter Allgemeine Zeitung on Dec. 22, 1999, urged the CDU to put the scandal -- and Helmut Kohl -- behind it. The incident, occasionally referred to in the German press as the "Merkel Putsch," propelled Kohl's former protégé to the party's leadership position and, ultimately, to the Chancellery.

More recently, it was reported that Kohl criticized Merkel's handling of the euro crisis by saying: "She is destroying my Europe."

This week, however, the CDU appeared eager to continue patching up the relationship following Merkel's much publicized visit to Kohl's home in Oggersheim in 2009. On Tuesday, the applause began even before Kohl reached the podium in a parliamentary meeting room where Merkel was waiting, eliciting a slow smile from Kohl. It was the first time in 10 years that Kohl had appeared with active conservative lawmakers in the Bundestag.

Journalists were excluded from the rest of the meeting, but conservatives were eager to comment on it afterwards. "It was very moving," said Andreas Schockenhoff, deputy conservative floor leader in parliament. His faction colleague Peter Gauweil said it was "very impressive." A third conservative noted that: "It was a special experience, just like old times."

Volker Kauder, who leads the conservatives in parliament, summed up the atmosphere in his introduction of Kohl. "You belong solidly in our center," he said, according to participants. And Kohl seemed willing to grasp the olive branch. "This is my home, here among conservatives, I am at home here," he said.

Merkel didn't speak on Tuesday. Instead, she is scheduled to hold the keynote address at the event on Thursday -- where Kohl's path into the history books will continue. 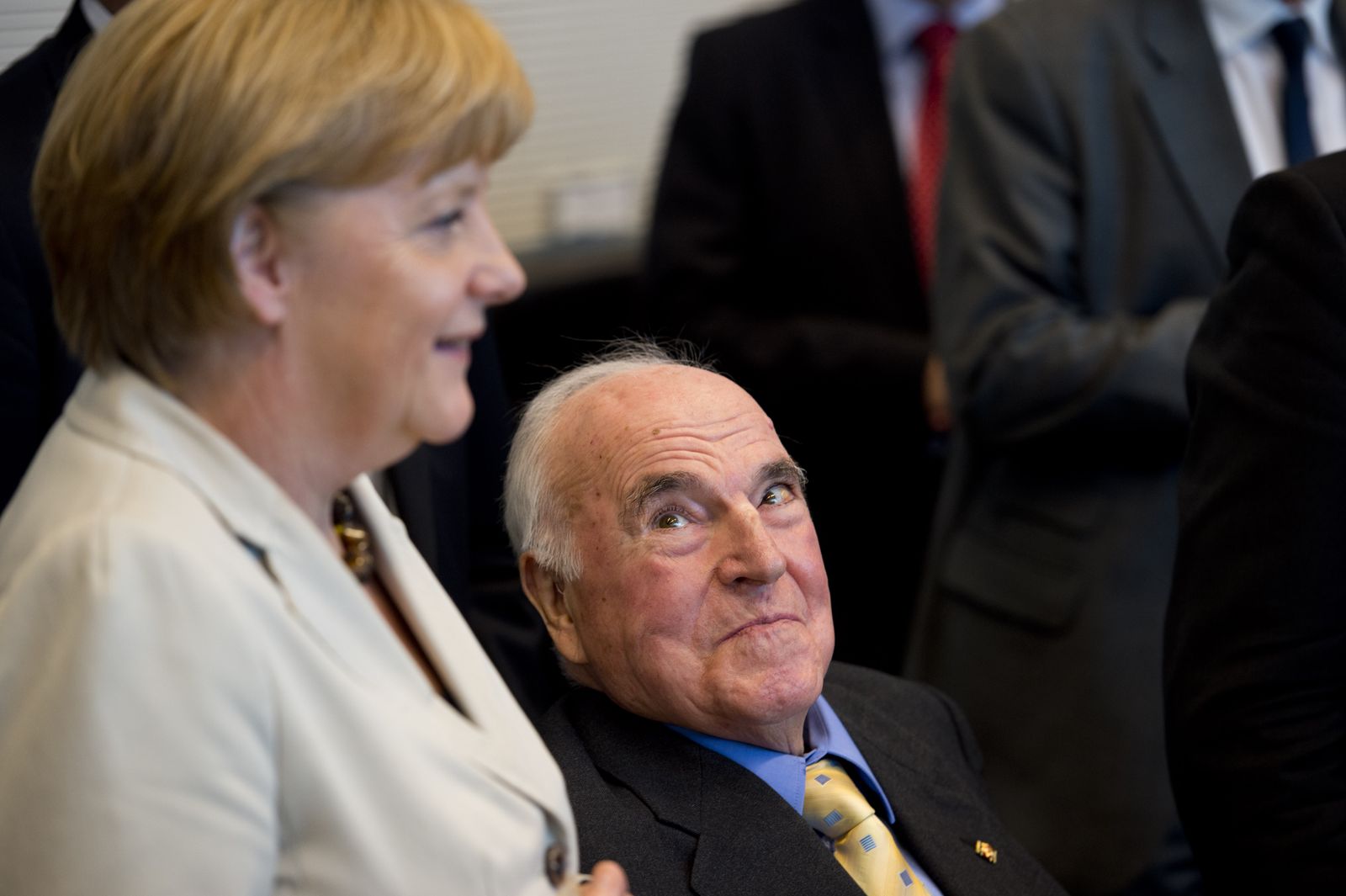 Former Chancellor Helmut Kohl together with Chancellor Angela Merkel in Berlin on Tuesday.